Lies Sleeping« an older post
a newer one »Fives and Twenty-fives
Book Notes Written with a loving hand by kitt some time around 08:29 on 28 May 2019 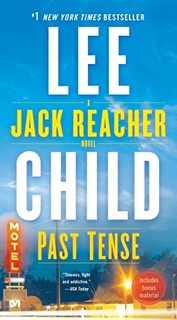 So, this book is a Reacher that isn't really a Reacher book. Yes, Reacher is in it, but he's half the story, not the full story.

We meet Reacher at the beginning of the book deciding to look into his family's history. He finds out where his dad grew up, and heads to said town. Turns out, a Canadian couple, desperate for money and with something in their trunk, are also in said town. They run out of gas and end up in a hotel that is pretty much a fly trap for unsuspecting travellers. Cue tense music, something suspicious is happening at this hotel.

Turns out, the proprietor of said hotel is some distant cousin of Reacher's. Except, we don't really learn about that easily. Instead, weird thing happen with a cat and mouse adventure happening with Reacher, while the two Canadians are puzzling out WTF is going on in the hotel that they can't leave (no gas, locked in, is very strange). The book is mostly about the Canadian couple, with a puzzled Reacher feeling around the edges.

Which is fine, this is actually one of the better Reacher books. Too many times people know JUST KNOW what's going on, when reality is usually full of denial (this book is), confusion (this book is), and strong biases to believe that This Can't Be Happening (this book is). Which makes the female cynic delightful to recognize.

I still liked it. Worth reading if you're a Reacher fan. If you're not yet a Reacher fan, start with book one.

“He said he couldn’t remember because birthdays weren’t important to him. He didn’t see why he should be congratulated for getting another year closer to death.” “That’s bleak.” “He was a Marine.”
Location: 842

Her accent was from the south. A drawl, but no longer honeyed. It was roughed up by exposure.
Location: 903

She looked in the mirror and blew her nose. She balled up the tissue and lobbed it toward the trash can. She missed. She bent down to correct her error. She was Canadian.
Location: 1,050

But out loud he said, “You were committing a crime on public land. I would be failing in my duty as a citizen if I didn’t point it out. That’s how civilization works.”
Location: 2,274

Reacher believed in staying flexible, but also having a plan, and in his experience it was about fifty-fifty which got used in the end. On this occasion the plan was to never slow down, to arrive at full speed, and to head-butt the wrestler mid stride. Which would check all the boxes. Surprise, overwhelming force, general shock and awe.
Location: 3,553

“What do they need, to make a bad thing happen?” “Theologically?” “In practical terms.” “There could be many things.” “They need a victim. Can’t do a bad thing without one.
Page 300

“One is the irreducible number.”
Page 301

Which meant Reacher was currently behind him. Always a good place to be. He looked
Page 316

The guy was tall and substantial, and his head was up, and his shoulders were square. But he wasn’t comfortable. Reacher had seen his type before. Not just in the army. No doubt the guy was a big-deal alpha male at whatever it was he was good at. But right then he was out of his depth. He was twitching with confusion. Or resentment.
Page 343

Up ahead and two acres away the motel was a low pile of glowing embers.
Page 362

You get a bigger picture with the naked eye. You don’t get distracted by the close up beauty.”
Page 373

“Did he have a happy life?” “He was a Marine. Happy was not in the field manual. Sometimes he was satisfied. That was about as good as it got.
Page 376