Weird« an older post
a newer one »The Great Influenza
Book Notes kitt decided around 18:45 on 19 July 2020 to publish this: 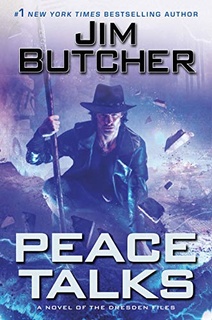 This is book 16 of The Dresden Files, and we all know that I will read this book. While I didn't read it immediately when I received it, I did read it all in one day (I know, I know, quelle surprise).

To say I am disappointed in this book is an understatement. To say I am not the only person who feels this way is to scream the truth. This book is, after some consideration, the worst book of the series, and that's lower than the first two books. So let's talk about them, because they are clearly good enough to hook me on the series, yet I'm less of a fan of them than when I originally read them. In the first two books, Butcher hadn't quite found his writing style, found Dresden's voice. As such, the first two books read less well, are more cheesy. Which isn't to say they are bad, they are not, but they are at the bottom of good. The first two books are the Nickelback of Urban Fantasy, the crap of the cream.

So, how could this book be worse than those books? Well...

This book is entirely setup for the next book, Battle Ground, book 17 of The Dresden Files. The plot lacks tension. The characters lack development, no one matures, ponders, overcomes, questions, or decides really to do anything. The one big plot point, an assassination attempt, is so out of character than the first question ANYONE would ask should be, "Why?" Start there, figure out why, and work backwards. But no, no one bothers to ask, let's just blow straight through the thinking part into the panic rescue, and how clever to figure out how to do this without blowing shit up. -ish.

And what the f--- is up with Ebenezer? Hint, hint, hint, rage, rage, rage. Oh, look, this does appear to be Dresden's first rodeo. I mean, come on, no, you don't become the Black Staff by being unable to control your rage. Just doesn't happen.

Yeah, again, this book is all setup. It is unexciting, uneventful, uninspiring. It is the first half of the "oops, I wrote too much, better split the book in half" book, which has the second half arriving at the end of September. If you're reading the Dresden Files, wait until the next book is out before reading this one, and read them both in one go. Don't read this one if you're not reading the series. And if you're listening to the audiobook, forgive Marster's his Mab voice. It is awful.

He shook his head. "Humans are scared of just about everything. Problem is, their first reaction to being scared—"

“Is to kill it,” I said, nodding. I considered my super-nice suit and decided that I didn’t much like suits anyway. I sat down on the ground next to River. “I’m familiar with the problem.”
Location: 3,121

“Old woman,” Corb taunted. “I remember you as a bawling brat. I remember your pimply face when you rode with the Conqueror. I remember how you wept when Merlin cast you out."
...
“Tell me,” Corb purred. “If he was yet among the living, do you think he would still love you? Would he be so proud of what you’ve become?”
Location: 4,251