Flame in the Mist« an older post
a newer one »Fifth Season
Book Notes Instead of being asleep at 20:12 on 10 August 2018, kitt created this: 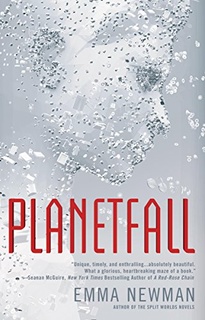 This book, along with Dark Orbit were two books recommended by Daniel Goldsmith, as two of the books on Kameron Hurley's Five Books That Will Restore Your Faith in Humanity. Other than "recommended by someone whose opinion I value" and "is science fiction," I didn't really know what to expect.

The world building was great. While I didn't really understand the motivation of The Stranger (always need some conflict in a plot, and this one included the introduction of A Stranger™), and why everyone in the colony was okay with his incredible pushiness. Of course, it was revealed in the end, so that mystery was solved.

The main character though, wow, does Newman get some of the personality imbalances correct. At one point, her despair comes through so strongly I had to stop reading for a bit.

The book is clearly the first in a series, and I've read the second books is darker than this one, but the end of this one was good enough to be a stand along book. If you're a science fiction fan, this is a good read.

I think “majority” is one of my least favorite words. It’s so often used to justify bad decisions.
Page 18

The resurgence of this kind of religious talk makes the skin on the back of my neck prickle. The times it’s blossomed in the colony have brought us closer to self-destruction than anything Mack has kept hidden.
Page 58

“This is wrong, Renata.” My father’s voice had dropped to a lower register, one within the vocal domain of disappointment. Even though I was in my late twenties I still felt the same twinge in my chest that his disapproval elicited when I was much younger. It irritated me. When would I stop being a child?
Page 73

Answer: to our parents, never.

“Don’t exaggerate.” I sat down, automatically keeping my weight off the back left leg of the chair that had already broken once. “I stood on the shoulders of a lot of people. Nobody does anything single-handedly anymore.”
Page 75

Nope. You didn't make that.

I can’t remember why I came back. Perhaps it was simply a matter of having formed enough emotional scar tissue to cope. Perhaps my curiosity steadily built up its own pressure until it became more powerful than the avoidance.
Page 79

There’s no sound except the wildlife staking out territories and calling for a mate. The sounds are different here than on Earth, but the purpose seems the same. “This is my patch!” they scream. “I want sex! Come and shag me! I’ll give you strong babies!” It’s the same stuff humans say most of the time. We just dress those needs up in fancier linguistic clothes.
Page 87

Sung-Soo is leaning against one of the windows, hands cupped either side of his face to shield out the light as he peers in. Even though there’s no way he can see inside, I’m still irritated. Why do people do that when there’s no answer at a door? Do they expect to see the resident in there, feet up, oblivious? Are they checking they’re not being snubbed, rather than whether the resident is at home?
Page 88

I can feel my lip curling in disgust at my younger self’s taste for melodrama.
Page 91

and the clothes I’ve moved to find the top I’m wearing now. I need the tightness around me, like being held, before I open the file.
Page 93

It takes a few minutes to summon the courage to open the file, and it’s only my irritation with myself that makes me do it in the end. The worrying about how it will make me feel has finally been ousted by the desire to stop feeling the twisting tightness in my chest. I need to be able to think of something else.
Page 93

I can’t help looking down, now that she’s put the idea in my head, and I trace the outline of her buttocks through the flight suit, the way her hips flare out at the tops of her thighs, far wider than her waist and shoulders. She used to hate her short legs and pear-drop shape but since the coma she’s been above such things. I look away when Mack clears
Page 96

There may be only a thousand or so people here, but it’s easy enough to make the pressure of conformity irresistible. Hell, sometimes we only need one other person to make us fall into line.
Page 174

He knows that I’m struggling because he has struggled every year. I need to be kinder to him. I don’t know a better way to handle this and I don’t like what he’s doing, but it doesn’t change the fact that it has a cost for him too.
Page 178

I’m too wired mentally and too exhausted physically to be able to cope with being curled up, awake and caught between the Scylla and Charybdis of guilt and reminiscence.
Page 189

We stare at each other, his hands palm up and his face open and expectant. I feel like a child given one of those utterly shit choices parents offer to trick the child into thinking it has a say in anything: “Do you want to record that thank-you vid for Aunt Jasmine now or after dinner?”
Page 192

I stand in the doorway, chewing my thumbnail for what seems like a horribly long time. Unable to act, I check my in-box and the network, but all the while I know I’m merely trying to divert my attention away from this paralysis.
Page 196

Even though I’m aware of the inherent bias of getting attached to the first explanation of a mystery, I can’t shake it.
Page 196

He smiles, but the usual warmth and delight is guarded now. I’m not the person he thought I was. I have no idea who that was supposed to be. Now he knows what I’m really like. A sour thought, if there ever was one.
Page 197

Before I was nothing more than an unbearable throbbing pain with a mind and voice. Now I feel other parts of my body.
Page 203

I close my eyes and take a moment to suppress the panic that’s rising within. Losing my shit is not going to help.
Page 205

“Perhaps you should take up running,” I suggest.

“Outside. Or in the gym. There’s one under the Dome.”

“What would I chase?”

“No, I mean run for the sake of running.”

Mack understands these people far too well. They may be scientists and experts and handpicked from thousands of hopefuls vying for every single place on Atlas, but they’re just people.
Page 243

How much easier to regret not leaving than being here now—knowing so much and yet so little—so very far from home.
Page 250

I don’t remember as clearly as I do the sight of the old plane trees in the London square her flat overlooked. It was fenced off from people who couldn’t afford to touch the peeling bark on the trees. Those were reserved for dogs owned by the wealthy to piss against three times a day when walked by the au pair.
Page 251

“I’m glad you told me. I understand. It would kill you to be left behind, always wanting to know what they’ll find. You wouldn’t be living anymore, wishing yourself so far away.”
Page 252

By then I was so mired in the physicality of exhaustion that I’d forgotten to be hopeful. We’re such base creatures, so easily pulled from higher things by the needs of the body.
Page 285