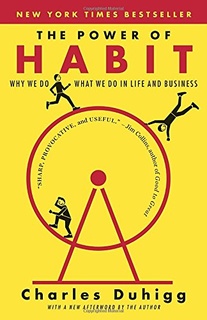 This is the third book in a row I've read that has a story about Rosa Parks in it. When she came up in one book, I wondered if I had read this book before. When she came up in this book, honestly, I had to roll my eyes a bit. Not at Parks in particular, but at the different interpretations, meanings, and explanations of her refusal, arrest, courage, and trial.

I liked the first third of this book.

So, when I was hit with a particular bad depression, my routines helped me cope. When I mentioned the depression, and the depth of it, Matthew handed me his copy of this book. I realized I already had a copy, so I read it instead.

Which is to say, I finished it this time.

The middle third was okay. The last third was pretty much filler. I would argue a new reader could ignore the last two thirds and still take away the best parts of this book.

That said, the book is still worth reading. Especially if you have no history or background in the power of habits and habitual thinking.

At boot camp, he had absorbed habits for loading his weapon, falling asleep in a war zone, maintaining focus amid the chaos of battle, and making decisions while exhausted and overwhelmed. He had attended classes that taught him habits for saving money, exercising each day, and communicating with bunkmates. As he moved up the ranks, he learned the importance of organizational habits in ensuring that subordinates could make decisions without constantly asking permission, and how the right routines made it easier to work alongside people he normally couldn’t stand. And now, as an impromptu nation builder, he was seeing how crowds and cultures abided by many of the same rules. In some sense, he said, a community was a giant collection of habits occurring among thousands of people...
Location: 164

So he sought help from a physician whose tolerance for experimentation outweighed his fear of malpractice.
Location: 258

This is a rare individual indeed. One could argue, a physician who does the right thing.

Parks’s husband was opposed to the idea. “The white folks will kill you, Rosa,” he told her.
Location: 3,402

This is the third book in a row that gives a different description of what Rosa Park went through. I find the different portrayals fascinating. I also find her being quoted / discussed so frequently fascinating.

There’s a natural instinct embedded in friendship, a sympathy that makes us willing to fight for someone we like when they are treated unjustly.
Location: 3,419

Studies show that people have no problem ignoring strangers’ injuries, but when a friend is insulted, our sense of outrage is enough to overcome the inertia that usually makes protests hard to organize.
Location: 3,420