The Beautiful and Damned« an older post
a newer one »Camino Island
Book Notes Written with a loving hand by kitt some time around 20:43 on 9 December 2017 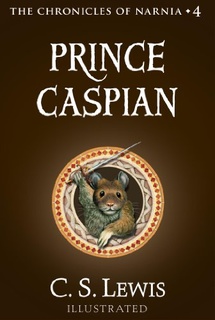 This is Book 4 of The Chronicles of Narnia.

I will likely be done with all of these by the end of the month, at the rate I'm going and ease of reading. I will be okay with being done hunting for Christian allegorical elements in the books I'm reading by Christmas.

This book puzzled me a lot in a couple places. I'm okay with time passing, and the kids being pulled back to Narnia - it's magic, and if you accept magic, you need to suspend disbelief and let the newly defined laws of nature reveal themselves. That's fine.

What I'm struggling with is that that talking animals, the Talking Animals, eat their own kind. They serve bacon and eggs and bear to the kids. In another book, the kids ate roast. Okay, so, maybe the animals who can't talk are a different species, distinctly farm animals? Nope, turns out that Talking Animals can devolve into non-talking animals. This means, there is a spectrum of Talking in Narnia with the animals. If we take Talking as a measurement of intelligence, then the Talking Animals eat their stupid, their dumb, their deaf, their mute, their mentally incapacitated, their learning-disabled. While this could be okay in some societies to cull the herd, I'm not sure this is what C. S. had in mind when he had his Talking Animals.

This book was published in 1951. The Two Towers was published in 1954. Why is this significant? Because C.S. Lewis had the protagonists saved by a giant forest of trees in this book. That's three years before the Ents were released on the world. Another struggle.

I also struggled with several of the allegorical elements in this book. When Aslan comes to town, a few people are delighted by him and everyone else runs. Oddly, only the repressed, the downtrodden, the abused are delighted to see him. So, Christianity is only for the underdog?

Again, the battles were absurd, and the wrap-everything-up send-the-bad-guys-to-a-remote-island-in-another-world resolution difficult to accept - what uninhabited, population-sustaining island still existed in the early 1900s? (None.) Reading as an adult, however, makes the absurdity amusing instead of intelligence-insulting.

I'll keep reading, I'm over half way done. I want to see how this story ends.

“We shall need a camp-fire if we’ve got to spend the night here,” said Peter. “I’ve got matches. Let’s go and see if we can collect some dry wood.”
Page 17

THE WORST OF SLEEPING OUT OF DOORS is that you wake up so dreadfully early. And when you wake you have to get up because the ground is so hard that you are uncomfortable.
Page 30

“Those who run first do not always run last,”
Page 90

“We are certainly in great need,” answered Caspian. “But it is hard to be sure we are at our greatest. Supposing there came an even worse need and we had already used it?”

“By that argument,” said Nikabrik, “your Majesty will never use it until it is too late.”
Page 96

“Yes,” said Peter, “I suppose what makes it feel so queer is that in the stories it’s always someone in our world who does the calling. One doesn’t really think about where the Jinn’s coming from.”
Page 102

“It’s like old times,” said Lucy. “Do you remember our voyage to Terebinthia—and Galma—and Seven Isles—and the Lone Islands?”
Page 113

Hmmmmm.... where have I heard THAT name before?

“Do you remember when we had the musicians up in the rigging playing flutes so that it sounded like music out of the sky?”
Page 113

Okay, think about this for a moment. She didn't say, "we had the sailors up in the rigging" she said musicians. So, here you have normal men and women who are good at playing musical instruments being hoisted up into the rigging to play for the kings and queens. It's cold up there, likely windy, and also quite likely miserable hanging from the rigging, and you have to do it or earn the displeasure of the kings and queens.

They went ashore at last, far too tired to attempt lighting a fire; and even a supper of apples (though most of them felt that they never wanted to see an apple again) seemed better than trying to catch or shoot anything.
Page 115

“I hope you’re right,” said Susan. “I can’t remember all that at all.”

“That’s the worst of girls,” said Edmund to Peter and the Dwarf. “They never carry a map in their heads.”

“That’s because our heads have something inside them,” said Lucy.
Page 119

They even thought they had struck an old path; but if you know anything about woods, you will know that one is always finding imaginary paths. They disappear after about five minutes and then you think you have found another (and hope it is not another but more of the same one) and it also disappears, and after you have been well lured out of your right direction you realize that none of them were paths at all.
Page 120

“Wouldn’t it be dreadful if some day in our own world, at home, men started going wild inside, like the animals here, and still looked like men, so that you’d never know which were which?”
Page 122

“Lucy,” he said, “we must not lie here for long. You have work in hand, and much time has been lost today.”

From somewhere deep inside Aslan’s body there came the faintest suggestion of a growl.

“I’m sorry,” said Lucy, who understood some of his moods. “I didn’t mean to start slanging the others. But it wasn’t my fault anyway, was it?”

The Lion looked straight into her eyes.

“Oh, Aslan,” said Lucy. “You don’t mean it was? How could I—I couldn’t have left the others and come up to you alone, how could I? Don’t look at me like that … oh well, I suppose I could. Yes, and it wouldn’t have been alone, I know, not if I was with you. But what would have been the good?” Aslan said nothing. “You mean,” said Lucy rather faintly, “that it would have turned out all right—somehow? But how? Please, Aslan! Am I not to know?”

Pretty sure Lewis is telling us to have strength in your faith, and do what needs to be done even when it's hard.

“Will the others see you too?” asked Lucy.

“Certainly not at first,” said Aslan. “Later on, it depends.”

“But they won’t believe me!” said Lucy.

And here's the gist of all faith: you believe, what other's believe doesn't matter. Except, objectively, you still need to believe in some things: gravity, for example.

“It is hard for you, little one,” said Aslan. “But things never happen the same way twice. It has been hard for us all in Narnia before now.”
Page 143

“I am sorry for Nikabrik,” said Caspian, “though he hated me from the first moment he saw me. He had gone sour inside from long suffering and hating. If we had won quickly he might have become a good Dwarf in the days of peace. I don’t know which of us killed him. I’m glad of that.”
Page 173

“Welcome, Prince,” said Aslan. “Do you feel yourself sufficient to take up the Kingship of Narnia?”

Okay, the self-awareness of Caspian is fantastic. The blame on age is insulting. Age does not give wisdom, there are incompetent old people. coughCheetoh.

“You come of the Lord Adam and the Lady Eve,” said Aslan. “And that is both honor enough to erect the head of the poorest beggar, and shame enough to bow the shoulders of the greatest emperor on earth. Be content.”
Page 218

How Stoic of Aslan. In the end, we're all the same - dead.