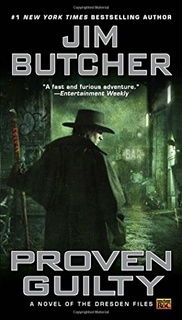 This isn't one of my favorite Dresden books (those are Dead Beat, Changes, and Skin Game, in that order). This one was, however, an enjoyable read. Yeah, we know Molly can be annoying, she's written fairly well as the angsty teenager going through changes and being defiant. And I see how the introduction of her into the inners of Dresden's world can be.

I found the reference to the Parable of the Talents to be frustrating. It goes:

“Three men were given money by their lord in the amount of fifteen, ten, and five silver talents. The man with fifteen invested the money, worked hard, and returned thirty talents to his lord. The man with ten did the same, and returned twenty talents. The lord was most pleased. But the third man was lazy. He buried his five talents in the ground, and when he returned them to the lord, expecting to be rewarded for keeping them safe, his lord was angry. He had not given the lazy man the money to be hidden away. He’d given it to the man so that he could use it and make his lands better, stronger, and ...

The third man RETURNED the funds. He didn't lose any. No, he didn't gain any, but he didn't lose it either. So he didn't make a rich man richer, he didn't make the rich man any poorer. I swear this is exactly the kind of sermon that people in power use to abuse the people under them: hey, YOU need to work harder to make ME more powerful. I dislike that story a lot.

This book, however, I liked, it's a Dresden book. Keep reading.

You can never tell how someone is going to handle power—not until you hand it to them and see what they do with it.
Page 34

There are violent bones in everyone’s body, if you look deep enough.
Page 53

The old man had been badly beaten, but it wasn’t the first such he had endured—physically or spiritually. He was a fighter, a survivor. He was afraid, but he was also angry and defiant.

Whatever had done this to him hadn’t gotten what it wanted—not like it had with the girl. It had to settle for a physical beating when its attack hadn’t elicited the terror and anguish it had expected.

The old man had faced it, and he didn’t have any power of his own, beyond a lifetime of stubborn will.
Page 117

I came through the door armed for bear and projecting an attitude to match.
Page 128

This cracks me up.

“Her actions could have thrown enormous forces out of balance, to the ruin of all.”

“Her heart was in the right place,” Fix said, his tone mildly defensive.

“Maybe,” I told him, as gently as I could. “But good intent doesn’t amount to much when the consequences are epically screwed up.”
Page 140

I got an up-close look at the Scarecrow as the van slewed into a bootlegger reverse.
Page 230

Another short phrase that just cracked me up.

“They never talk about this kind of crap when they talk about brothers.”

“You weren’t wearing it,” he pointed out. “Hell, you think I’m going to walk into one of your patented Harry Dresden anarchy-gasms without all the protection I can get?”
Page 232

Sometimes I thought it might be nice not to make any choices. If I never had one, I could never screw it up.
Page 244

“Power,” he said, waving a hand in an all-encompassing gesture. “All power is the same. Magic. Physical strength. Economic strength. Political strength. It all serves a single purpose—it gives its possessor a broader spectrum of choices. It creates alternative courses of action.”

“So,” he said. “You have more choices. Which means that you have much improved odds of making mistakes. You’re only human. Once in a while, you’re going to screw the pooch.”
Page 245

“That things will unfold as they are meant to,” Forthill said. “That even in the face of an immediate ugliness, the greater picture will resolve into something all the more beautiful.”
Page 245

“That the good that will come is not always obvious. Nor easy to see. Nor in the place we would expect to find it. Nor what we personally desire. You should consider that the good being created by the events this night may have nothing to do with the defeat of supernatural evils or endangered lives. It may be something very quiet. Very ordinary.”
Page 246

“Then perhaps you should try to have faith that you might one day have faith.”
Page 246

I can get behind this one.

“Am I the only one who is starting to think that maybe Mouse is something special?”

“Always thought that,” I said.

“I wonder if he’s an actual breed.” Charity glanced over her shoulder and said, “He looks something like a Caucasian.”
Page 261

Hard to picture Mouse. He's a Foo Dog, yes, but most foo dogs are representations of the actual animals. A Caucasian dog you can find pictures of, go pet if you'd like.

Yes, she had the potential to go astray on an epic scale. Don’t we all.
Page 344

“No one wants it,” I said. “Most of the bad guys in the real world don’t know that they are bad guys. You don’t get a flashing warning sign that you’re about to damn yourself. It sneaks up on you when you aren’t looking.”
Page 346

“Children are a precious gift, but they belong to no one but themselves. They are only lent us a little while.”
Page 352

“Harry, I know you aren’t a churchgoing man, but God does help people who aren’t perfect.”
Page 381

“I know what it’s like,” he said. “There isn’t any way to make it disappear. But it gets better with time and distance.” He studied me for a moment. “If you had it to do again, would you?”

“Then what you did was a necessity, Harry. It might be painful. It might haunt you. But at the end of the day, so long as you did what you believed right, you’ll be able to live with yourself.”
Page 385

“Children have their own kind of power. When you’re teaching them, protecting them, you are more than you thought you could be. More understanding, more patient, more capable, more wise. Perhaps this foster child of your power will do the same for you. Perhaps it’s what she is meant to do.”
Page 388

Life can be confusing. Good God, and how. Sometimes it seems like the older I get, the more confused I become. That seems ass-backwards. I thought I was supposed to be getting wiser. Instead, I just keep getting hit over the head with my relative insignificance in the greater scheme of the universe. Confusing, life.
Page 389

“Times are changing, Hoss. That’s for sure.” He polished off his beer. “But they always do.
Page 402