The Black Swan« an older post
a newer one »The Western Star
Book Notes Instead of being asleep at 14:25 on 18 October 2017, kitt created this: 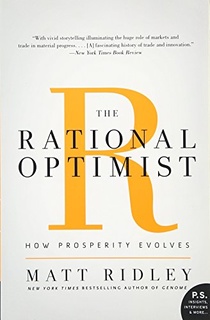 This book is awful.

As far as I can tell, anyone who really likes this book, who reads it crtically and tries to follow up with the data presented, is suffering from the Murray Gell-Mann amnesia effect. I can't explain why so many people like and even recommend this book otherwise.

It is full of wild, unsupported statements, blatant lies, and far-fetched predictions. After having recently read The Black Swan, I'm even more disgusted by this book and Ridley's predictions and arguments for everything is great.

The main take aways from this book:

Yeah, that last one was more than a little surprising to me, too. Yet, chapter after chapter, this is the underlying message he brings.

Here's the ad hominem attack, just to get it out of the way: Ridley appears to suck as a scientific editor and an economist. Based on his work history, he lost a lot of money because he was unable to accurately assess risks. Based on this book, he doesn't understand how good science works, where you have a hypothesis, you find reproducable evidence to support your hypothesis, you look for evidence that refutes your hypothesis, then you conclude with a working theory. Instead, Ridley likes the Gladwell approach to sounding scientific: make claims using stories as support. As Ben commented, the plural of anecdote is not data.

That out of the way, the way that Ridley either fails to provide a citation for his statement, hides his citations making them difficult to verify, or cites works that don't provide data for review makes even the statements that I want to believe suspect.

I disliked this book so much. It is the first book I've finished that I rate "burn" since I published my book reviews scale. So, why did I finish it? I was hoping that because this book was so highly recommended, it would redeem itself in the end. It did not.

Burn every copy you find.

Extracted parts of the book with my commentary. Too long for this page.