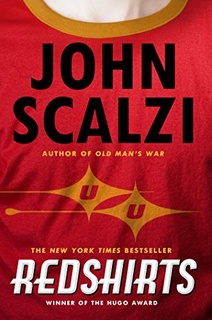 Okay, yes, I know that I have said, on numerous occasions, if Scalzi writes it, I will read it. That is just the way it is, no arguing.

Except I hadn't read this book. I had actively chosen not to read this book. Why? Because the reviews said it diverged from the classic science fiction that Scalzi is known for, and if I wanted to read not-science-fiction Scalzi, I'll read his blog. So, I skipped it.

All the way until Rob commented that it was the perfect brain candy and he hadn't laughed this hard in a while (who knows if that while is more than I day, I don't, because getting Rob to laugh is a goal of every conversation), and I have already read it wait I haven't well I should. So, as soon as I was done with The Gates of Fire (which I recommended to Rob), I started Redshirts.

Is not classic Scalzi science fiction.

Yes, the Redshirt phenomenon from Star Trek is the title of the book, and yes, the characters figure this out, but there are more absurdities in the plot, resulting in an internally-consistent and thoroughly-absurd plot twist (time travel back to the authors) that is the cause for the original fanboy uproar that kept me from reading the book. It wasn't so bad. I enjoyed how all the pieced tied up nicely at the end.

Worth reading if you're a Scalzi fan, or a quirky science-fiction fan.

Dahl paused a moment before answering. “Do you know how the rich are different than you or me?” he asked Duvall.

“You mean, besides having more money,” Duvall said.

“What makes them different—the smart ones, anyway—is that they have a very good sense of why people want to be near them. Whether it’s because they want to be friends, which is not about proximity to money and access and power, or if they want to be part of an entourage, which is. Make sense?”
Page 14

Hester looked at Hanson admiringly. “I didn’t think you were that cynical,” Hester said.

Hanson shrugged again. “When you’re the heir to the third largest fortune in the history of the universe, you learn to question people’s motivations,” he said.
Page 62

“Sure, I’ll baby-sit him until he passes out,” Dahl said.

I read this and, yes, starting laughing out loud. I'm sure this isn't Caltech specific, but this is an actual conversation I have had.

“Maybe I do,” Jenkins said. “But why would it matter?”

“Because if you don’t know why something is the way it is, then you don’t know anything about it at all,” Dahl said. “All the tricks and superstitions aren’t going to do a damn bit of good if you don’t know the reason for them. The conditions could change and then you’re screwed.”
Page 87

Hanson said. “When you’re nuts, your reasoning is consistent with your own internal logic, but it’s internal logic, which doesn’t make any sort of sense outside your own head.” He pointed at Jenkins. “His logic is external and reasonable enough.”
Page 96

“In retrospect, the plan has significant logistical issues,” Finn admitted. “On the other hand, it worked. You can’t argue with success.”

Also known as a Bold Play™ in ultimate.

“Yes, and I have training dealing with deep, existential questions,” Dahl said. “The way I’m dealing with it right now is this: I don’t care whether I really exist or don’t, whether I’m real or fictional. What I want right now is to be the person who decides my own fate. That’s something I can work on. It’s what I’m working on now.”
Page 159

I never understood writer’s block before this. You’re a writer and you suddenly can’t write because your girlfriend broke up with you? Shit, dude, that’s the perfect time to write. It’s not like you’re doing anything else with your nights. Having a hard time coming up with the next scene? Have something explode. You’re done.
Page 228

You don’t win by getting through all your life not having done anything.
Page 284

“Did you want to make a confession?” Father Neil asks. Samantha giggles despite herself.

“I don’t think I could confess to you with a straight face,” she says.

“This is the problem of coming to a priest you used to date in high school,” Father Neil says.

SAMANTHA WASN'T THE ONLY ONE GIGGLING AT THIS. Take note, Paul. <grins>