Dark Matter« an older post
a newer one »Knife
Book Notes Written with a loving hand by kitt some time around 22:13 on 5 September 2019 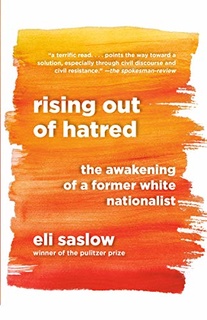 Ha, I figured out why I picked up this book! Yay, getting better! It was recommended by David Pell in his Next Draft newsletter. That news letter has a strong recommendation, by the way.

This book is the story of Derek Black, who was the White Supremacy Poster Child™ before he started doing his own research, looked at the numbers, and, unlike I would say 99.9999% of the world, was able to change his mind based on facts and evidence instead of opinion and wants.

Black's story is far better told by Saslow's telling, even more by Black's telling, than I could summarize nicely. Pell's recommendation was spot on, it is a good book to read, inspirational in a way I wasn't expected to be inspired. I don't think Saslow completely conveyed the loss Black must have felt when he turned his back on the WS/WN movements, the loss of community, family, identity. He did it, and one should be impressed by it.

The book is a good reminder that one man can destroy a society, takes the rest of us to prevent it.

What was the appropriate response to the most intolerant kinds of free speech? Exclusion or inclusion? Was it better to shame and demonize Derek? Or was it more effective to somehow reach out to him?
Location: 667

Each fall at New College, James witnessed the very real effects of centuries of white domination. He led orientation workshops on race and privilege for first-year students, and one group exercise in the orientation manual began with students lined up side by side at the bottom of a wide stairway. Take one step up the stairs if you’re white, James would tell them. Take one step if you’re male. One step if you’re straight; if your parents went to college; if you own a car; if English is your first language; if you have more than fifty books in your household; if your family has health insurance; if both of your parents are employed; if your high school taught the culture and history of your ancestors; if you’re a citizen of the United States. And year after year, James had watched the most privileged group of students—the ones who looked exactly like Derek—fly right up the stairs, just as they typically ascended to the top positions in American society. Whites were much better off than any other social group by every statistical measure: income, net worth, life expectancy, home ownership, infant mortality, graduation rates, and on it went.
Location: 859

At school, he tested several years above his grade level—a highly gifted student who nonetheless couldn’t fit in with his peers. He felt both superior to his classmates and jealous of their relationships, and late in elementary school Matthew’s feelings of exclusion and isolation were exacerbated by acute physical pain.
Location: 998

“Reach out and extend the hand, no matter who’s waiting on the other side,” his father had told him once,
Location: 1,029

Every day spent with Derek meant another spontaneous adventure. Allison was used to scheduling her time on a desktop calendar, plotting out daily goals as she advanced down the road map she had drawn for her life.
Location: 1,604

With one former boyfriend, Allison had sometimes felt as if parts of her were being subsumed into the relationship—her individual friendships, her autonomy, and bits of her confidence gradually swallowed up by the codependency of coupledom. Derek, meanwhile, encouraged her to do whatever she felt like doing most, whether that meant going dancing with friends or playing intramural soccer. He brought her food late at night while she worked on school papers and then left her alone to finish her work. Spending time with Derek never felt to Allison like an obligation. It was always the choice she wanted to make.
Location: 2,124

The iconic European warriors so often celebrated on Stormfront had never thought of themselves as white, Derek decided. Some of them had considered skin color not a hard biological fact but a condition that could change over time based on culture, diet, and climate. They had fought not for their race but for religion, culture, power, and money, just like every other empire of the Middle Ages. “The fact that white people eventually conquered the world wasn’t proof of fate but basically just a fluke of history,” Derek later wrote.
Location: 2,624

For years, Don had believed in two facts above all: that white nationalism was an inherently righteous cause; and that Derek was one of the smartest, most rational people he knew. Now those facts were in conflict. Had Don been wrong about Derek’s intelligence? Or had he somehow been wrong about white nationalism? He didn’t want to consider either possibility, so he tried to come up with theories that would make it all fit. Maybe Derek was just faking a change in ideology so he could have an easier life and a more successful career in academia, he thought. Or maybe this was Derek’s way of rebelling against his family. Don spoke for hours on the phone that week with Duke, who suggested another theory. Duke thought Derek was suffering from a kind of Stockholm syndrome. He had become a hostage to liberal academia and then experienced a misguided empathy for his captors and their views about the world.
Location: 2,944

The challenge for Derek during the next months was uprooting those same seeds in his mind. Even though he had
Location: 3,122

logically concluded that white nationalism was harmful and wrong, the ideology remained hardwired into every part of his subconscious. Over two decades, he had learned to interpret so much of the world through the lens of white nationalism: to distrust the U.S. government because it was working to undermine the white European majority; to be skeptical of minorities who were inherently working against his best interests; to avoid most popular music because it reflected the multicultural dumbing down of America; to ignore professional sports because they propped up the social standing of black athletes; to skip Hollywood movies made by Jewish propagandists; and to distrust a mass media controlled by liberal elites.
Location: 3,123

Trump reacted just as Don had done whenever another murderer was connected to Stormfront. Trump called the violence “unfortunate” and then immediately attempted to justify it. “The people that are following me are very passionate,” he said. “They love this country. They want this country to be great again.”
Location: 3,264

Derek’s own political identity was still largely unformed. He didn’t know if he was a Democrat or a Republican, and he didn’t want to be either one. As a white nationalist, he had always regarded Republicans and Democrats with equal suspicion, because he believed both parties were guilty of forcing multiculturalism on the American people. He was also wary of aligning himself again with any sort of collective ideology—a label that could dictate his decision making. He wanted to be loyal to his own opinions and nothing else,
Location: 3,316

To be a white nationalist had always meant rooting for chaos and delighting in upheaval.
Location: 3,336

He had chosen to write about a ninth-century religious leader named Bodo, a royal deacon who had been a rising star in the Carolingian Empire and the Christian church. Historians thought Bodo was destined to become a powerful Frankish politician, but then, in 836, he abandoned his life with little public warning. He converted to Judaism, grew out his beard, changed his name to Eleazar, and then moved to the multicultural kingdom of Al-Andalus, where he married a Jewish woman and began trying to convert other Christians. His former Frankish allies came to consider him a traitor and an enemy. It was one of the starkest individual transformations in medieval history, and the focus of Derek’s research was all that remained unknown. Historians were able to recover only a few official accounts of Bodo’s life and two of his original letters. No one had recorded Bodo’s internal deliberations, his self-doubt, or his emotional reckoning as relationships were made and then destroyed. In the official record, his transformation was clean and absolute: Bodo to Eleazar. A Christian and then a Jew. History had preserved none of the messiness.
Location: 3,590

“Even if you were somehow right—even if it was super important to keep races apart for preservation—the only way to do that is to put people on trains by busting into their houses and breaking up their families, which is a huge human rights violation.” Don raised his palms up above the table. “So?” he said. “History is filled with human rights violations. They could be forced to leave.”
Location: 3,655

“Forcing people out?” Derek stared at his father and grimaced. “That’s a horrible thing to hope for. It would be awful and inhumane.” “It’s going to be horrible either way, Derek. This country is on the verge of a reckoning.”
Location: 3,659