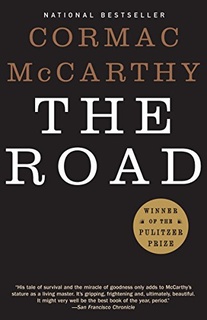 This book was recommended by Ryan Holiday in his June reading list. It sounded interesting, so I borrowed it from the library, read it, and here we are.

The struggle in this book is man against nature in a post-apocalyptic world which seems to be some sort of ecological disaster that blighted the world. Many scenes include ash and melted roads, along with the two main characters, a father and his son, covering their faces with masks so that they can breathe. The disaster is such that it appears there are very few people left, and the ability to grow crops or feed is pretty much gone. The remaining people are struggling to survive, which includes resorting to anything edible, including other people.

The journey of the father and son is to the ocean. They are moving along with a shopping cart, trying to survive. They appear to have been doing this together for six, eight, maybe ten years, since the boy was born, and the ocean is some level of salvation. Except it really isn't. It is more like "something to do that provides some level of meaning."

I can see where the book would be more emotional if, say, a parent is reading the book and is thinking of their child when reading it. I lack that perspective, so some aspects were perhaps lost on me. What wasn't lost on me was the portrayal of flowing empathy and refused kindness. The boy wants to help, the father knows they can't. The boy is angry the father refused to help some people, the father fears losing his son's love as the father chooses their survival. It's a hard choice, too willfully lose your humanity to keep a loved one alive.

The book is worth reading, but I'm not sure it would be one of my first books to recommend.

He mistrusted all of that. He said the right dreams for a man in peril were dreams of peril and all else was the call of languor and of death.
Page: 17

No lists of things to be done. The day providential to itself. The hour. There is no later. This is later. All things of grace and beauty such that one holds them to one’s heart have a common provenance in pain. Their birth in grief and ashes. So, he whispered to the sleeping boy. I have you.
Page: 56

I cant help you. They say that women dream of danger to those in their care and men of danger to themselves. But I dont dream at all. You say you cant? Then dont do it. That’s all.
Page: 59

A person who had no one would be well advised to cobble together some passable ghost. Breathe it into being and coax it along with words of love. Offer it each phantom crumb and shield it from harm with your body. As for me my only hope is for eternal nothingness and I hope it with all my heart.
Page: 59

The book and the movie, of

The book and the movie, of course, are both brutal. Like maybe more brutal than the normal Walking Dead episode. It's not a study of apocalyptic times, really, as much as it a relationship study. For me the worst part was the Mom breaking. Walking out the door into the wild, to a certain death, and making that choice in the full knowledge of the burden she was leaving. Charlize Theron's portrayal is haunting.

This story takes the wind out of my sails on that and a couple of other levels.