The Last Boy« an older post
a newer one »Foxglove Summer
Book Notes kitt decided around 19:23 on 23 November 2018 to publish this: 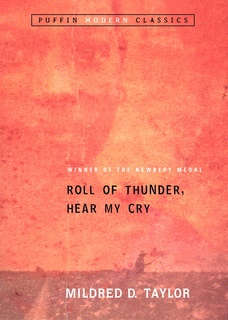 In the large list of "books I knew about and didn't read in childhood, but are still in print," this book came to my attention, so I plunked it on my library hold list without thinking about it much. It dropped into my reading queue, and I ripped through it.

This is a notable book in the Logans Series, about a black family living in the American South during the 1930s, which is to say, the Great Depression. The family was lucky, in that they owned their own land, but owning and holding onto land if often two very different things, especially when power and prejudice and greed come into play.

The story follows Cassie, who is nine, as she experiences the subtle and overt racism of her times. Taylor does a good job of describing the ugliness of human nature as seen from a young person's perspective. If anything, I'd argue that Taylor left out a lot of the uglier parts, which is likely a good thing, given the target audience.

A number of times in the book, Cassie complains that things aren't fair. And, yes, god yes, I'm agreeing with the character. Even now, things aren't fair, they will never be fair, and that frustrates me, even in fictional books.

The book doesn't lose its impact over its 42 years of print. Worth reading.

“Well, I just think you’re spoiling those children, Mary. They’ve got to learn how things are sometime.”

“Maybe so,” said Mama, “but that doesn’t mean they have to accept them… and maybe we don’t either.”
Page 30

We preferred to do without them; unfortunately, Mama cared very little about what we preferred.
Page 43

“If I was to be walking out there when the bus comes, that ole bus driver would be sure to speed up so’s he could splash me,” I suggested.
Page 53

“See, fellows, there’s a system to getting out of work,” T.J. was expounding as I sat down. “Jus’ don’t be ’round when it’s got to be done. Only thing is, you can’t let your folks know that’s what you’re doin’. See, you should do like me. Like this mornin’ when Mama wanted to bring back them scissors she borrowed from Miz Logan, I ups and volunteers so she don’t have to make this long trip down here, she bein’ so busy and all. And naturally when I got here, y’all wanted me to stay awhile and talk to y’all, so what could I do? I couldn’t be impolite, could I? And by the time I finally convince y’all I gotta go, all the work’ll be done at home.” T.J. chuckled with satisfaction. “Yeah, you just have to use the old brain, that’s all.”
Page 72

This character is like so many people these days: they work harder not to do the work than the effort of doing the work would actually take.

“Baby, you had to grow up a little today. I wish… well, no matter what I wish. It happened and you have to accept the fact that in the world outside this house, things are not always as we would have them to be.”
Page 126

Mama’s hold tightened on mine, but I exclaimed, “Ah, shoot! White ain’t nothin’!” Mama’s grip did not lessen.

“Then how come Mr. Simms don’t know that?”

“Because he’s one of those people who has to believe that white people are better than black people to make himself feel big.”
Page 127

“They also said that slavery was good for us because it taught us to be good Christians—like the white people.” She sighed deeply, her voice fading into a distant whisper. “But they didn’t teach us Christianity to save our souls, but to teach us obedience. They were afraid of slave revolts and they wanted us to learn the Bible’s teachings about slaves being loyal to their masters."
Page 128

"... and people like Mr. Simms hold on to that belief harder than some other folks because they have little else to hold on to. For him to believe that he is better than we are makes him think that he’s important, simply because he’s white."
Page 129

“But there are other things, Cassie, that if I’d let be, they’d eat away at me and destroy me in the end. And it’s the same with you, baby. There are things you can’t back down on, things you gotta take a stand on. But it’s up to you to decide what them things are. You have to demand respect in this world, ain’t nobody just gonna hand it to you. How you carry yourself, what you stand for—that’s how you gain respect. But, little one, ain’t nobody’s respect worth more than your own. You understand that?”

“Now, there ain’t no sense in going around being mad. You clear your head so you can think sensibly."
Page 175

"Maybe even do what they doing now. It’s hard on a man to give up, but sometimes it seems there just ain’t nothing else he can do.”
Page 205

Nearer the fence a stocky man, masked like the others, searched the field in robot fashion for hidden fire under the charred skeletons of broken stalks.
Page 267

Were robots around in 1930, that she'd be able to make this comparison?