The Heart Goes Last« an older post
a newer one »Midnight Riot
Book Notes Instead of being asleep at 23:48 on 3 September 2018, kitt created this: 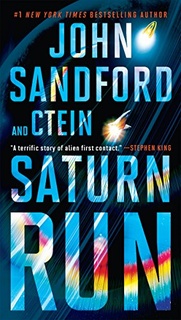 Okay, with my renewed interest in many things Caltech, I learned about this book when I was looking at some Wikipedia page that referenced popular culture that included something about Caltech. I'll admit I knew about the big ones, Real Genius and the TV show Numb3rs. Books, however, I knew less so, with the exception of Contact.

This one was a new one for me, and, oh boy, am I glad I picked it up. I've enjoyed Sanford

You can tell the Sanford parts reading Saturn Run, said definitely shows through. The characters in Saturn Run have a similar flavor. That the book starts at Tech doesn't hurt, either.

Basic premise: fluffy pretty-boy Caltech grad student is the first to spot a decelerating object near Saturn, and (because objects don't decelerate naturally in space), all hell^H^H^H^Hconspiracy theories break loose. Pretty much the US and China do a mad dash to Saturn to see what the hell this thing is. If not for the space race going on, we'd get there in a unified fashion, but, well, people.

The science in the book is lots of fun, and, much like The Martian, believable (which, I gather in the point, Ctein being Sanford's science guy). If you're not a fan of the science stuff, the long winded technical parts might suck for you. I thoroughly enjoyed them, and strongly recommend this book to my geeky friends who want a fun read. Non-geeky friends, read fast through those part maybe?

If you do read the book, note how quickly you discover that the fluffy guy really isn't so fluffy. Fun stuff.

The other thing is, I looked at his VA psych files, and I suspect Darlington does want something. Desperately. And we can give it to him.”

“He wants something to do,” Crow said. “Something serious.”
Page 31

Every smart person does.

“I’m really not interested in killing anybody,” Sandy said. He took a hit of Dos Equis. “Not anymore.”

“If you got to the point where you had to kill someone, you’d most likely be saving the whole crew, as well as your own ass,” Crow said.

Becca was annoyed with herself. She was about to take a trip that maybe one person in a million got to make, that every techie dreamed of, and she couldn’t stop thinking about heat flow integrals.
Page 71

“Hold on a sec.” Howardson was reading through his logs. “I’m looking at the simulation optimization you requested six months back. It’s the right answer—it gets you there fastest, which is what you asked for. You wanted the fastest trip because it reduces the expenditure of life-support supplies.”

“You may not feel that way in a minute. I’ve got news you’re not gonna like.”

Becca responded, and when she ran out of breath, Vintner asked cheerfully, “All done? ’Cause, you know, you were repeating yourself there at the end. I think you said ‘bitch’ at least four times and ‘motherfucker’ five or six.”
Page 117

Becca fidgeted. Buying into a schedule she didn’t believe in was a plausible path to professional suicide. On the other hand, quitting in midstream would also trash her reputation. Game theory, she thought. If I quit now, I keep my professional integrity and it’s a sure loss. If I stick it out, there’s a chance I might be able to pull it off and no one will know that I was blowing smoke. A guaranteed loss vs. a possible win.
Page 119

Based on empirical evidence, what would actually happen.

“Nothing. I’ve been up here for weeks, never a thought about it—the separation. Now I’m thinking about it.” She pushed an egg around her plate, nibbled at a piece of toast.

“Well, stop thinking about it.”

“Not always that easy.” She looked past him, at the shrinking Earth out the window, and at the altitude display, which was steadily clicking off kilometers like a second hand, each clock-tick marking their increasing separation from home.

Clover sighed and smiled at Sandy. “On our way. Thank God. Life gets easier when there aren’t any choices, you know what I mean?”

As they headed for the showers, Sandy said to Crow, “He kicked your ass. A pencil-necked shrink. A fuckin’ violinist. A snowflake. A delicate little flower . . .”

“In sports, the rules define outcomes,” Crow said. “He won because I wasn’t allowed to bite his nose off, knee him in the balls, or gouge his eyes out.”

Only the criminally stupid or naïve assumed the “other side” was less clever. And who would that be in this case?
Page 183

Designing commercial power plant cooling systems meant dealing with company executives who felt the laws of engineering and even physics ought to be bent to improve the fiscal bottom line.
Page 194

And time. Time needs to be bent, too.

But she couldn’t let go of that structure. She’d seen him drawing, freehand, different concepts for guitars that he was manufacturing with Martinez, and asked him to teach her a little drawing. As it turned out, she could draw neither a straight line nor an accurate curved one. She insisted on drawing what she knew, rather than what she saw, a tendency not easily curable.
Page 216

“Sandy...” She paused for a moment, organizing her thoughts before responding. “I have to be. You are a rich, handsome, privileged, white guy. You get to play on the easy level. If you gave a crap, people would take you seriously, automatically, because guys like you get that as a freebie. I’m a short, blond woman who was raised Minnesota Nice, plus I have a cute face and I’m fat! How seriously do you think I’d get taken in the world if I didn’t regularly throw it in their faces?”
Page 218

Sandy’s gaze was fixed on her; it was a little unnerving when he focused like that. “But wouldn’t people like you better if you weren’t quite so, um...” He fumbled for a word.

Becca interrupted him. “What? Assertive? Aggressive? Pushy? Do you really think people will pay more attention to my technical advice, my expertise, if it comes from a nice Minnesota girl? Really?”
Page 219

“Didn’t do the drugs,” Crow said. “I wanted to feel it. I think if anything like that ever happened again, I’d do the drugs.”

“Which is why I’m sitting here watching this moronic vid with a smile on my face,” Sandy said. “They got good drugs now, man. You’re still all fucked up, but it doesn’t hurt as much.”
Page 253

The idea of drugs to help you get through the pain of grief while it is overwhelming, until it settles into a bearable dull ache? Fuck, sign me up for that.

The helmsman began to sob. It was not professional. Zhang found it entirely understandable.
Page 366

“Ma’am, we need to do more than plan for ship security. We also need to plan for what we’d do if security fails and the Chinese manage to take over the ship. That might be a small possibility, but we have to consider it.”
Page 388

“What happens is, your brain gets stuck in a feedback loop. Why did this happen? Is there something wrong with me that it keeps happening—first in the Tri-Border, and now here? What could I have done? What could I have said to her that I didn’t? You get these flashbacks and every time you flash back, the loop intensifies. The meds break the loop and smooth out the thought processes, and eventually time starts to erode the power of the flashbacks."
Page 391

“You’ve been thinking about this.”

“My history in the Tri-Border: trust no one, everything breaks, nothing works as advertised, and if anything can go wrong, it will.”

“But getting older by the minute,” Sandy said.
Page 392

The level of failure that he felt, the deep melancholy, that was something he could barely endure. Every morning he woke from fitful sleep into a worse nightmare. He’d done his best to be a good commander, to make the right decisions, but all he could say of himself was that his very best had only been enough to keep a near-total disaster from being total.
Page 412