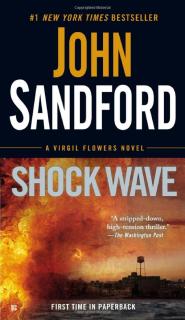 Once again, no intention of reading a book today, much less a book in its entirety, but travelling to devObjective today meant I had time on my hands, so I spent it reading (I know, shock). It helps to have the first seven books of the series in some variation of paper form. I have to say I'm rather glad I have a physical copy of these book instead of just digital. While I appreciate the digital format for convenience, I do so love the experience of reading books in physical form.

This Virgil Flowers book had a lot of death in it, though less than the previous one, and a lot of explosions. And, at the risk of giving away the ending, not a lot of sex. I found this last part to be somewhat of a relief, to be honest, since, well, Reacher had a different woman in every book and at what point do you just roll your eyes and think, "Really? Just how many STDs DO you have?"

Anyway, the book. The plot was great. I really liked the reveal in this one, as it had a number of clues but not enough that you the reader, nor Flowers the hero, realized what was going on until pretty much the end. Enough redirection that you knew something was up, but not enough to give up reading. The humour in this one was good, still with the quick wit, which I enjoyed. I like how Sandford is portraying the religious angst of a preacher's son who believes in a god that doesn't particularly care about the day-to-day of his believers, and really like a number of the biblical references included in the books. I've looked up a number of the quotes, reading them in the KJV translation, and thought about them. Completely fascinating, when they are taken 2000 years and who knows how many translations later.

Speaking of, I have books 2-5 in physical form, already read, if anyone wants them to read.