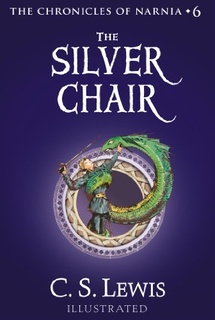 This is Book 6 of The Chronicles of Narnia.

I did not like this book. This would have been the first book of two books triggering my rule "stop reading a series after two consecutive bad books," except it is the second to last book of the series, and, well, I intend to read the whole series. Suffice it to say, I'm glad I have this book from the library.

Part of my dislike of this book is the shallow treatment given to the long trek the main characters, and the seriously little sh-ts said main characters are. Though, really, Pole and Scrubb likely are little sh-ts, as they are kids, and how could one expect a kid to be honest and thoughtful and strong and good and steadfast, without the experience needed to understand how important these characteristics are.

Of course, many adults also lack these characteristics, so I'm unsure why I was so frustrated with these kids, except maybe that Christ-Analogy told them what to do and they ignored him. How many times does someone get to see Asland? How many lives never saw him? Pole sees him, talks with him, receives instructions from him, and still ignores his words. Frustrating.

I will, of course, finish the series, since I'm reading all these classic children's books. I'm glad to be done with this one. Blah.

Jill suddenly flew into a temper (which is quite a likely thing to happen if you have been interrupted in a cry).
Page 3

"Now a job like this — a journey up north just as winter’s beginning, looking for a Prince that probably isn’t there, by way of a ruined city that no one has ever seen — will be just the thing. If that doesn’t steady a chap, I don’t know what will.”
Page 76

Jill thought that when, in books, people live on what they shoot, it never tells you what a long, smelly, messy job it is plucking and cleaning dead birds, and how cold it makes your fingers.
Page 84

“The bright side of it is,” said Puddleglum, “that if we break our necks getting down the cliff, then we’re safe from being drowned in the river.”
Page 85

Puddleglum! What a great character! He spends his time imagining the worst and is delighted when things aren't so bad! Too bad the kids ignore him.

“And why were you so stiff and unpleasant? Didn’t you like them?”

I'm laughing at that. He also takes things literally.

But delighted when wrong - very Stoic in his imagining the worst and being able to accept it.

“That’s all very well,” said Puddleglum. “But what I was saying was — ”

If you want to get out of a house without being seen, the middle of the afternoon is in some ways a better time to try it than in the middle of the night. Doors and windows are more likely to be open; and if you are caught, you can always pretend you weren’t meaning to go far and had no particular plans.
Page 125

How often they woke and slept and ate and slept again, none of them could ever remember. And the worst thing about it was that you began to feel as if you had always lived on that ship, in that darkness, and to wonder whether sun and blue skies and wind and birds had not been only a dream.
Page 154

“Where I come from,” said Jill, who was disliking him more every minute, “they don’t think much of men who are bossed about by their wives.”
Page 166

Well, Jill, go back to the horrible world you live in, where women are second-class citizens.

Thirdly, the pain itself made Puddleglum’s head for a moment perfectly clear and he knew exactly what he really thought. There is nothing like a good shock of pain for dissolving certain kinds of magic.
Page 190

"All you’ve been saying is quite right, I shouldn’t wonder. I’m a chap who always liked to know the worst and then put the best face I can on it. So I won’t deny any of what you said. But there’s one thing more to be said, even so."
Page 190

"It would not have suited well either with my heart or with my honor to have slain a woman."
Page 194

Note to self, grow up to be an evil empress.

"And all’s one, for that. Now, by my counsel, we shall all kneel and kiss his likeness, and then all shake hands one with another, as true friends that may shortly be parted."
Page 200

“Friends,” said the Prince, “when once a man is launched on such an adventure as this, he must bid farewell to hopes and fears, otherwise death or deliverance will both come too late to save his honor and his reason."
Page 202

Jill held her tongue. (If you don’t want other people to know how frightened you are, this is always a wise thing to do; it’s your voice that gives you away.)
Page 224