Daylight War« an older post
a newer one »Joyland
Book Notes Yeah, kitt finished writing this at 22:14 on 10 February 2017 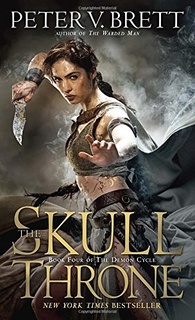 Why is this book called The Skull Throne? This isn't the Skull Throne, this book is the second half of The Daylight War, and okay, yes, this is the book of war. So many f'ing deaths. So much stupid male ego.

I suspect that Brett has been taking lessons from George R. R. Martin, including the detail of death on a commode.

This is the first book full of non-stop action. In Brett's style, we have backstories, multiple ones, filled in, but the bulk of the plot was in the "current" time frame.

Arlen and Jardir are pretty much non-existent in the story after a few philosophical conversations early in the book, pretty much discussing the merits of democracy (yay, Arlen) and authoritarianism (boo, Jardir, but we pretty much already hated him), so the next book should be interesting as we catch that plot in the current timeframe.

Yay for the introduction of the new characters, if only they were actually interesting.

Boo for the loss of the main characters we all cared about.

I mean COME ON.