Countdown to Zero Day« an older post
a newer one »The Core
Book Notes Written with a loving hand by kitt some time around 21:51 on 24 October 2017 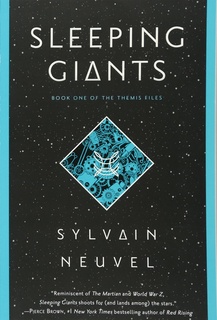 This is book 1 of The Themis Files

This book was on my Amazon Wish List from a year or so ago. It was on some reading list I had read, likely a book riot list, but not on my immediate to-read stack. Sagan had it on our road trip, which is when I started reading it. I didn't finish it on the trip, so kept it to finish later. And, today was later.

I enjoyed this book. It is told in the piece-together reports from different people, told in an interview style, as popularized by World War Z. The characters were written well enough for me to "GRRRRRR!" at a couple, which is great. The ending was a surprise, but likely shouldn't have been given this is book one of a (planned) three book series.

I'll read the next book when it comes out.

"Most people don't really have a purpose, a sense of purpose anyway, beyond their immediate surroundings. They're important to their family, but it doesn't go much beyond that. Everyone is replaceable at work. Friendships come and go.
Part 3: 3: Headhunting File No. 120

"One thing is certain. You are a survivor, Doctor Hans. You are definitely not one to throw away your life, your family, and your career, for something as petty as principles."
File No. 121

"They're bluffing. You know that."

"So are we. Bluffing doesn't mean what it used to. No one wants an all out war, and everyone knows it. Both sides know the other side doesn't want to fight so we push each other against the wall, a tiny bit further every time. It's all about saving face, but basically we're playing chicken, and both sides think they can do whatever they want because the other guy will never use its nuclear arsenal. It probably won't be today, but someday, someday, one of us is going to be terribly wrong."
File No. 129

"I never understand the merits of proportional response."

"I'm not sure there are any. It's just what we call human nature for people with too much firepower in their hands."
File No. 129

"I can understand your desire to distance yourself from this decision, given the current state of affairs, but you did make a choice. That choice will not cease to be yours because a lot of people might die as a result."
File No. 129

"Your an asshole, you know that? Isn't that a bit arbitrary?"

"What he did, however horrifying, doesn't have to negate every other day of his life."
File No. 141

"Nothin'. Our other boat stopped. We waited. Submarines are slow, clumsy things. A lot of what we do is just sit and wait. We're good at that."
File No. 143

"They told me she'd be courtmartialed. She must have been right, about her orders, I mean."

"They also made it very clear to me that none of this ever happened. I don't think they'll put anyone on trial for something that didn't happen."

"Are you always this cynical? You seem to doubt a lot of what you were told."

"It's all cockamamie, if you ask me. Military intelligence. They'd come up with these really farfetched stories, and just because we don't ask questions they think we're actually buying it. They forget they're talking to people who were trained not to ask questions. If it were up to me, I'd rather they just didn't tell me anything. It's less insulting than to be lied to."
File No. 143

"People often confuse leadership with managerial skills. I agree with their assessment. You certainly have the ability to inspire people. Minutae on the other hand might not be your forte."
File No. 229

"It's one thing to risk your own life. It's fairly easy to rationalize the deaths of strangers. To shoulder the death of a friend, someone you know, that's a completely different thing."
File No. 229

"I feel numb... After something this intense, everything else just... things that would have you up in arms before now seem so utterly trivial. Nothing really matters. You start to ignore little things because they're little things. You compromise, you rationalize. Soon you look at yourself in the mirror and you don't recognize the person staring back at you. But, you know, I'm alive, I'm okay. I wake up every day and I get out of bed thinking today might be just a bit better than yesterday. Most of the time it is."
File No. 229

"Most of their days are never going to change, no matter what. I suppose that's why people are disenchanted with politics. They expect whoever they elect to change their lives."
File No. 233

"... My deepest wish is for this discovery to redefine alterity for all of us."

"The concept of otherness. What I am is very much a function of what I am not. If the other is the Muslim world, then I am the Judeo-Christian world. If the other is from thousands of light years away, I am simply human. Redefined alterity and you erase boundaries."
File No. 233

"It pains me to say it, but I have always been thoroughly bewildered by North Korea. They cannot be threatened, as they feel themselves superior to the one making the threat. They cannot be reasoned with, and most importantly, they are one hundred percent convinced of their righteousness, so they cannot be bought. Meglomaniacs with delusions of granduer are notoriously difficult to handle, but how generations could follow one another is beyond me."
File No. 233

"If you fall love with someone, there is a good chance the person won't love you back. Hatred, though, is usually mutual. If you despise someone, it's pretty much a given they're also not your biggest fan."
File No. 250

"... I guess what I'm saying is, it's easier to be just one more soldier in a giant army than being the whole army by yourself."

"It does not matter if you are all alone or one in an army of thousands. You have a choice. You have always had a choice. You should be grateful to be in a position to make it when the stakes are so clear. They rarely are."

"I'm not sure I understand."

"You are in control of a formidable weapon, but one that is designed for close combat. This means that you will always see whomever you choose to kill. That is a clear choice. Destroying a bridge in a night incursion is a much harder decision to make, you just never took the time to think about it. Removing it could prevent enemy reinforcements from reaching the front line, that bridge could also be the only escape route for civilians. How many people will you save? How many will you send to their deaths? That is a complicated decision to make."
File No. 250

"I will say one more thing before you go. Stop worrying so much. Are you doing your best?"

"I fear my best may not be enough."

"Then you should come to peace with whatever comes. All you can do is try your best."
File No. 255