The Rosie Project« an older post
a newer one »Make Me
Book Notes kitt decided around 15:08 on 1 November 2015 to publish this: 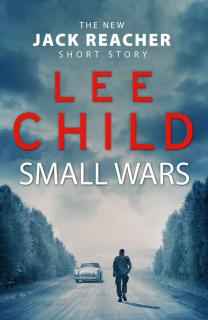 Okay, really, anything by Lee Child that has Jack Reacher in the book I will most likely read. No, that's not right, I will read. Mom has tired of Reacher, how EVERY book he has a new woman to f---, screw, eh, have sex with, and that's rather tiring. I can't say I blame her for not wanting to read the books, they are very much of the same plot flavor.

I, on the other hand, am still enjoying them. This one, Small Wars, as a short novella (Kindle Single, short story actually), was no exception. I read it on the flight from Sydney back to San Francisco, which was the longest flight I've been on since the flight to Sydney. This, and Make Me, the latest full-length Reacher book, kept me entertained on the way.

This book goes back to Reacher's career beginning, which means, of course, that Joe Reacher is still alive. Having been recently been reading Jo Nesbo's Harry Hole series, I pretty much assumed that any action in the book was a misdirect of the actual events. Turns out, nope, what you read is what you get, except the WHY is what is important in this book. We follow along in the plot, and, of course Reacher figures everything, which I really can't understand how amazing he is, given he never makes a mistake.

Best part of the story is that we meet Frances Neagley when she is much younger. Totally great.

I enjoyed this book, but I'm enjoying all the Reacher books, so, yeah, I'll keep reading.