Tomorrow and Tomorrow« an older post
a newer one »The Obelisk Gate
Book Notes Posted by kitt at 14:42 on 13 October 2018 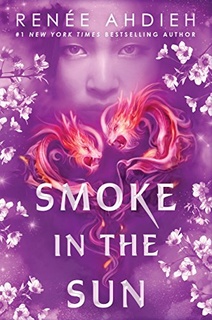 Okay, book two of two of The Flame In The Mist series. For which I would like to say, "Good."

Because I wouldn't continue reading this series.

The first book has the protagonist, Hattori Mariko, escaping an assassination attempt and going off to hide in the woods to track down who ordered her death. At the end of the book, her brother and her betrothed found her and together brought her back to The Palace™. Technically Her Choice™ but in reality a false dichotomy, whatever.

So, now we follow Mariko in palace intrique. We see her with little political saavy navigate royalty and servants, making alliances and insulting some. During all of this, Her Love™ is in danger.

I was sufficiently engaged with the characters in the last book to read this one, but a subsequent book in the series likely won't be interesting to me.

If you like teen romance adventure with a medieval Japanese twist, sure. Otherwise, skip the books.

She’d never known the right words to do so before. Never known how to wield the right weapons. But ingenuity could be a weapon, in all its forms. Her mind could be a sword. Her voice could be an axe.
Page 16

But time had taught Kanako that what was expected rarely came to pass. Death always collected its due. The only thing that remained steadfastly true was power. The power you had. The power you gave. The power you concealed.
Page 33

“You may ask whatever you wish, But I do not owe you a response.”
Page 49

“It appears insults do have an effect on your brother. How predictable.”

“Insults are indeed a base form of intimidation,” Roku replied
Page 51

There — hovering in the darkness, with Ōkami by her side — Mariko realized that every person she’d ever met, from the smallest of children to the most notorious of thieves, had a life as intricate and significant as that of an emperor or a samurai or an elegant lady of the court. Not once in her seventeen years had she heard a member of the nobility discuss this. Those who served them had been born beneath unlucky stars and could never share the same sky, no matter how hard they might wish for it.
Page 78

“You do not know what it means to be happy,” the empress said. “Happiness is not a thing to be found here in the imperial court. We take moments of pleasure. Collect them and keep them tight in our chests. And we hope they are enough to fill whatever holes our truths leave behind.”
Page 86

Back at her father’s province, she had known people like the empress. Women and men who took perverse pleasure in exacting unnecessary revenge on others.
Page 94

When Ōkami spoke, his voice was soft. Apologetic. “That was . . . dramatic.” He sighed. “But I suppose I am to blame for that.” All trace of sarcasm had vanished.

“I have no excuse for provoking you, especially when you came to help me.”

“No.” Mariko shook her head, her right hand trembling as she brushed a tendril of hair behind one ear. “My behavior is mine and mine alone. You are not to blame. I let my anger take hold, and anger is a temperamental beast.”
Page 143

It had taken her losing everything she knew to finally understand. Feeling pain and sorrow was not at all a sign of weakness. It was a sign of love.
Page 145

“Our deepest truths are usually the hardest to conceal.”
Page 151

Perhaps this was what it meant to feel love. To be together and apart in the same instant.
Page 152

Leaders needed to know what lay around the next bend, even when moving through uncharted territory. A follower need only concern himself with each of his steps. Each of his breaths. He could move forward, oblivious to the path ahead. Trusting in those left to make the decisions.
Page 157

“I see mystery and sadness. Anger. Not necessarily because you were born a woman”—Mariko smiled in obvious remembrance of what Yumi had said not too long ago—“ but more because you have always been treated as less than what you are.”
Page 204

Okay, I need a t-shirt with this on it.

Loss had taught her yet another lesson. Real love was more than a moment. It was everything that happened after. Chaos in one instant, simplicity in the next. Everything and nothing in the space of a simple breath. It was clarity, sharp and numbing, like a winter’s morning.
Page 209

Ōkami did not cry, not even when he was sure no one was there to bear witness. He would never allow such weakness to overcome him.
Page 308

Ōkami hated heroes more than anything else. As a boy, he’d concluded that heroes cared more about how the world perceived them than they did about those they’d left behind.
Page 309

It had moved Raiden that one of her requests was for justice absent malice. He longed for the ability to convince his brother of the merit behind this. His brother’s idea of justice made Raiden’s flesh crawl as though he’d waded into a pool of maggots.
Page 315

The army she’d amassed in her enchanted world, biding time for the right moment to strike. Some of its ranks were young. Some were elderly. Some were infirmed. Minamoto Roku’s imperial soldiers would hesitate before striking them down. And in the heat of battle, to hesitate was to die. Many more were
Page 327

It was not up to his mother to save him. Just as it was not up to his father to give him answers. That was not the way of life. Only Ōkami could do what needed to be done. It was time for him to forgive his past. Not forget it. Only a fool would forget such things. But if he could not let go of the demons in his past, how could he ever hope to embrace his greatest fear?
Page 335

This troubling sentiment did not stop men from looking at Yumi with covetous glances. A part of Kenshin disliked the way their eyes followed her every motion. As though her beauty were a thing to be consumed.
Page 349

“Because if no one cares about what is right or wrong in the seat of our empire—the very seat of our justice—then all we hold dear is lost.”
Page 384

It was a strange feeling for Ōkami. To hate someone with such fire and know all at once that his death would bring Ōkami no solace.
Page 395