The Salt Line« an older post
a newer one »How To Be Bored
Book Notes Written with a loving hand by kitt some time around 09:00 on 2 February 2018 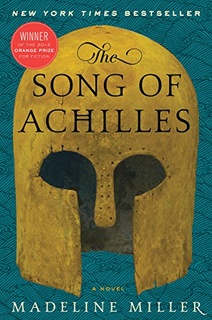 Again, I don't know why this book was on my reading list, or what motivated me to put it in my library request queue, but I'm glad I did. It is a well written, hauntingly beautiful retelling of the Achilles story. I thoroughly enjoyed it.

With this book, I made the mistake of waiting until the last possible moment to start reading it. Most books take me three days to find enough time among Life™ to finish a book, at most a week. This book read slowly, so it took me the full three days to read, when I expected it to take me a day (which is about 4 hours of actual reading time, tops).

When I started reading, however, I didn't want to go my usual pace. I slowed down, because I wanted this book to move slowly. I wanted to be in the beauty of story-telling, to allow the story to unravel at its pace not mine. I stopped many times to look up characters, discover their story, learn a little more about Greek mythology.

Once I slowed down (threw my reading schedule out the window, actually), I really enjoyed this book. I strongly recommend it.

A hundred servants work for twenty days beating out the racing track and clearing it of stones. My father is determined to have the finest games of his generation.
Page 2

Our ragged alliances prevailed only when no man was allowed to be too much more powerful than another.
Page 13

“Yet other boys will be envious that you have chosen such a one. What will you tell them?”

“I will tell them nothing.” The answer came with no hesitation, clear and crisp. “It is not for them to say what I will do.”
Page 37

I stopped watching for ridicule, the scorpion’s tail hidden in his words. He said what he meant; he was puzzled if you did not.
Page 44

I can smell him. The oils that he uses on his feet, pomegranate and sandalwood; the salt of clean sweat; the hyacinths we had walked through, their scent crushed against our ankles.
Page 63

The beginning of our studies, if it is possible to call them that. For Chiron liked to teach, not in set lessons, but in opportunities.
Page 82

“There is no law that gods must be fair, Achilles,” Chiron said. “And perhaps it is the greater grief, after all, to be left on earth when another is gone. Do you think?”
Page 84

“What will you answer?”

“I do not know,” Achilles said.

“That is an answer for now. It will not be good enough later,” Chiron said.
Page 90

Had she really thought I would not know him? I could recognize him by touch alone, by smell; I would know him blind, by the way his breaths came and his feet struck the earth. I would know him in death, at the end of the world.
Page 134

She did not know that I almost asked him, a hundred times, to be a little kinder to her. You do not have to humiliate her so thoroughly, I thought. But it was not kindness he lacked; it was interest. His gaze passed over her as if she were not there.
Page 140

“The sons of Troy are known for their skill in battle, and their deaths will lift your name to the stars. If you miss it, you will miss your chance at immortality. You will stay behind, unknown. You will grow old, and older in obscurity.”
Page 164

And here we have the motivation in meaning. All of life is fleeting. Very, very, very few people are remembered even mere decades after their deaths. Immortality in the form of a song, a story? It will still die.

“I do not think I could bear it,” he said, at last. His eyes were closed, as if against horrors. I knew he spoke not of his death, but of the nightmare Odysseus had spun, the loss of his brilliance, the withering of his grace. I had seen the joy he took in his own skill, the roaring vitality that was always just beneath the surface. Who was he if not miraculous and radiant? Who was he if not destined for fame?
Page 167

The never-ending ache of love and sorrow. Perhaps in some other life I could have refused, could have torn my hair and screamed, and made him face his choice alone. But not in this one. He would sail to Troy and I would follow, even into death.
Page 168

“It’s not true,” I said. The blood in my face fired my voice. It rang loudly down the beach. Odysseus raised an eyebrow.

“True is what men believe, and they believe this of you. But perhaps they are mistaken."
Page 175

I watched them marching, rank on cheerful rank. I saw them dreaming of the plunder they would bring home, and the triumph. There was no such dream for us.
Page 187

"You can use a spear as a walking stick, but that will not change its nature.”
Page 207

If there was a rebellion against his authority, now would be the time. The very thought of it seemed to anger him, and his voice grew rougher. This was a frequent fault of his: the more precarious his position, the more unlikable he became.
Page 219

Our world was one of blood, and the honor it won; only cowards did not fight. For a prince there was no choice. You warred and won, or warred and died.
Page 220

Chiron had said once that nations were the most foolish of mortal inventions. “No man is worth more than another, wherever he is from.”

“But what if he is your friend?” Achilles had asked him, feet kicked up on the wall of the rose-quartz cave. “Or your brother? Should you treat him the same as a stranger?”

“You ask a question that philosophers argue over,” Chiron had said. “He is worth more to you, perhaps. But the stranger is someone else’s friend and brother. So which life is more important?”
Page 299

Priam’s voice is gentle. “It is right to seek peace for the dead. You and I both know there is no peace for those who live after.”
Page 350

She wears a cape, and it is this that undoes her—that allows her to be pulled, limbs light and poised as a cat, from her horse.
Page 351