Lovecraft Country« an older post
a newer one »Network Effect
Book Notes Written with a loving hand by kitt some time around 21:35 on 28 September 2020 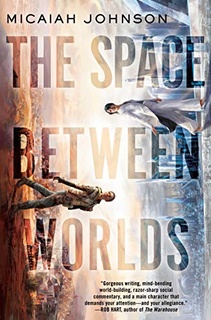 I very much enjoyed this book. It was recommended on the XOXO slack, and worth the recommendation.

The premise is that the multidimensional universe exists, which means resources on one universe instance can be harvested for the prime planet, the first planet to develop the technology to traverse between worlds. The catch in this traversing is that only one instance of a person can exist in a universe. If a traverser, a walker between universes, arrives in a universe where their counterpart is still alive, then both die. Which is to say, the most valuable traversers are those who are alive on the prime Earth, and dead in all the other universes.

The story is told from the point of view of Cara, a traverser who doesn't quite belong on the Prime.

Yes, all sorts of spoilers:

The original Cara went to the narrator Cara's world and died, because duplicates can't exist (see above). Cara, being the survivor that she is, assumed Prime Cara's identity, and travelled back to Prime. So, now we have Cara figuring out what is going one, an uncomfortable longing, a world of comparable riches, new social dynamics to learn even as the universes are quite parallel, and a confrontation to power. The ending is not the typical happy ending, but isn't isn't an unhappy ending, more of a "yeah, that's the right ending."

The book, similar to Dread Nation in its character and voice, is engrossing the whole way through. Recommended. Good science fiction and worth the read.

Because no traverser has ever made a report to enforcement or asked questions, they think they’ve pulled this elaborate ruse on lower-level employees. But really, we just don’t care. A job’s a job, and people edging out other people to make money buying and selling something invisible just sounds like rich-people problems.
Location: 152

He leans forward, setting down a steaming cup, and adjusts his glasses to look at my progress screen. “Am I witnessing company theft in my name? My wounded heart.”

“Come now, old man. It can’t really be theft if I’m just reading. You can’t steal something that’s still there when you’ve taken it.”

“You’ll find a large portion of the judicial system here disagrees with you.”
Location: 178

People who don’t believe in taking up more space, air, or attention than strictly necessary are unsurprisingly opposed to claiming whole new worlds. They see it as new colonialism, and they’re not wrong.
Location: 514

I know what I would do if I were her. What I did when I was her. The House tried its best by me, but I failed as a sex provider. Don’t let anyone ever tell you it doesn’t take skill, because it does, and I didn’t have it.
Location: 618

The clothes I have to wear today are monochromatic and androgynous. Subconsciously or deliberately, the people in this section of 238 have rebelled against their government’s surveillance by refusing to stand out.
Location: 713

Why have I survived? Because I am a creature more devious than all the other mes put together. Because I saw myself bleeding out and instead of checking for a pulse, I began collecting her things. I survive the desert like a coyote survives, like all tricksters do.
Location: 738

“Luck, I guess,” I say, because the first thing a monster learns is when to lie.
Location: 740

Maybe there’s something to classism. Maybe eating caviar growing up gives you a bigger brain. Maybe eating dirt poisons your memory. Or maybe it’s just easier to think something is impossible than to try.
Location: 776

What they don’t tell you about getting everything you ever wanted is the cold-sweat panic when you think about losing it. For someone who’d never had anything to lose, it’s like drowning, all the time.
Location: 1,016

I set about the problem like I set about all problems. I made lists.
Location: 1,018

I don’t realize how many years I’ve been alone until I warm under a gift as simple as someone’s undivided attention.
Location: 1,378

THERE ARE SLIGHT advantages to being so often treated as prey. For instance, you tend to watch others more than others watch you. You tend, also, to only ever be minimally disoriented by a sudden loss of safety. But the most important benefit to being so often hunted is that you always know when it’s happening.
Location: 1,423

So when the men come into the room somewhere after midnight, I am sitting in a chair facing them. I’d heard the footsteps gathering about half an hour after the pod had beeped to tell me I was as healed as I was going to be, and I thought briefly of escaping. But the boots had gathered at each end of the hall, and I’d rather be dragged out than give them the satisfaction by stepping into a trap. Eventually my patience outlasted theirs, and four runners entered my room.
Location: 1,426

“Sounds like fun,” I say, standing. I can be remarkably compliant when I don’t have a choice.
Location: 1,432

Sometimes, focusing on survival is necessary. Sometimes, it is just an excuse for selfishness.
Location: 1,716

He nods, though he still must not expect to survive this. “May your life be long and easy.” It’s a common blessing out here, but I’ve never dissected it before. Why are we, who are so unhappy, fixated on long lives? What is the point? An easy life isn’t a blessing. Easy doesn’t mean happy. Alive doesn’t mean anything at all. Sometimes the path to an easy life makes you miserable.
Location: 2,316

Esther turns her back to us, and says the second part of the prayer to the dead. “Nelline, I am commending you into the arms of the earth, the preserver of all mercy. I am returning you to everlasting peace, and to the denser reality of the creator of all. Don’t be scared. Don’t regret. Whatever time you had, it was enough. Whatever you accomplished, it was enough. We will remember your good deeds for the rest of our lives. We will forget your wrongdoings forever. Thank you, thank you, thank you, for spending your time in the dirt with us.”
Location: 2,860

“Some things are inevitable.”

“Nothing is inevitable,” I say. Nik Nik is the tide I’ve been kicking against for the better part of a decade, and I have to keep kicking because I’ll drown in him as surely as a tar pit.
Location: 2,968

I should have known to let the powerful man kill whomever he wants, just like I always have.

“When you came to Wiley City, didn’t you want it to be better?”

“Warlord, emperor, CEO…” Jean shrugs. “No difference. You can’t save the people he killed. You can only damn yourself. Unless you think some trial, some murder sentence, will please the dead?”
Location: 3,254

I’m not even sure if I’m talking, if I’m coherent, but I feel Exlee saying, I know. We all know. We understand. As they stroke my back and gently massage my neck, I realize it is touch I want, touch that is making me feel a little bit whole again, and it is touch from a person who is part castle, someone I cannot destroy and who will always be safe.
Location: 3,867

As I leave Exlee reminds me to say Jean’s name each morning and each night until the burial, because our dead are only weights on our backs when we won’t let them walk beside us, when we try to pretend they are not ours or they are not dead.
Location: 3,878

Blood is the only answer for blood in the desert. Thinking this way is dangerous. Murder has a cycle just like water. In the same way water becomes a cloud, then becomes water again, when blood calls for vengeance the blood from that vengeance calls too. If you plan to give death, it will always return to you.
Location: 3,986

She’s staring at me, her face unreadable in the same way a star chart is unreadable when there are no lines to mark the constellations. It’s not that you can’t make out a shape, it’s that you can make out so many shapes you’ll never know which one is right. If I wanted to, I could read longing in her distance. But if I’m honest, it’s probably just my own reflected back by her indifference.
Location: 4,058

“What?” I ask, because even lovely puzzles get tiring if they’re unsolvable.
Location: 4,061