This Is How You Lose The Time War« an older post
a newer one »The October Man
Book Notes kitt decided around 21:04 on 27 September 2019 to publish this: 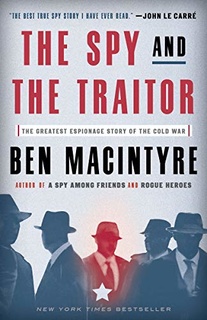 I found this book on the recommended table at Indigos a couple weeks ago, finding it available at the library that evening, and started reading with what I thought would be enough time to read leisurely.

I wasn't correct on the leisurely, as the book read more slowly than I expected it to read. Some books are like that: the writing fits into your brain and the words read easily. I believe Stephen King's works are like this, which is a good reason his books are so popular. Sometimes the books are not like that: the writing feels wrong, is slow going, requires a shift in the reader's brain to accommodate the words. Inkheart by Cornelia Funke was one of these books. The Septimus Heap books were also like that. This one is like that, too.

That the book is non-fiction is even more WOW!

Gordievsky was a KGB agent who saw how Communism doesn't work as a political structure. There are ebbs and flows in the levels of freedom, with Communism being so far on the authoritarian scale as to be ultimately unsustainable, and Gordievsky saw this. Disagreeing with the lack of personal freedoms in his country, he worked to reduce its strength.
He didn't take it down, but he did affect things in very large, very positive ways, and for that, we thank him.

It's odd to read history with a happy ending, tbh. There were a number of recollection quotes early in the book that indicated Gordievsky lives through his ordeal, but I still needed to read his Wikipedia page to skip to the end (yes, as I do). Gordievsky's tale is worth reading on more than a Wikipedia page.

“The Party was God,” his son later wrote, and the older Gordievsky never wavered in his devotion, even when his faith demanded that he take part in unspeakable crimes.
Page: 8

In Stalin’s paranoid police state, the safest way to ensure survival was to denounce someone else. “Better that ten innocent people should suffer than one spy get away,” said Nikolai Yezhov, chief of the NKVD.
Page: 9

With a peasant’s ingrained common sense, she understood the caprice and vindictiveness of state terror, but kept her mouth shut.
Page: 10

But the head of Directorate S declined to let him go, with the pettiness typical of a boss determined to retain a member of staff just because another boss has tried to poach him.
Page: 39

From now on Oleg Gordievsky would live two distinct and parallel lives, both secret, and at war with each other. And the moment of commitment came with the special force that was central to his character: an adamantine, unshakable conviction that what he was doing was unequivocally right, a whole-souled moral duty that would change his life irrevocably, a righteous betrayal.
Page: 56

Spies come in many shapes. Some are motivated by ideology, politics, or patriotism. A surprising number act out of avarice, for the financial rewards can be alluring. Others find themselves drawn into espionage by sex, blackmail, arrogance, revenge, disappointment, or the peculiar oneupmanship and comradeship that secrecy confers. Some are principled and brave. Some are grasping and cowardly.
Page: 60

For Gordievsky, Leila’s gentle personality and simple sweetness seemed a tonic after Yelena’s shrewish disdain. He had become used to calculation in his human relationships, constantly assessing his own actions and words and those of others. Leila, by contrast, was natural, outgoing, and uninhibited: Oleg felt adored, for the first time in his life.
Page: 69

Gordievsky’s letter was his testament. I must emphasize that my decision is not the result of irresponsibility or instability of character on my part. It has been preceded by a long spiritual struggle and by agonizing emotion, and an even deeper disappointment at developments in my own country and my own experiences have brought me to the belief that democracy, and the tolerance of humanity that follows it, represents the only road for my country, which is European in spite of everything. The present regime is the antithesis of democracy to an extent which Westerners can never fully grasp. If a man realizes this, he must show
Page: 79

the courage of his convictions and do something himself to prevent slavery from encroaching further upon the realms of freedom.
Page: 80

Love often begins with an outpouring of naked truth, a passionate baring of the soul.
Page: 81

Lenin is often credited with coining the term “useful idiot,” poleznyi durak in Russian, meaning one who can be used to spread propaganda without being aware of it or subscribing to the goals intended by the manipulator.
Page: 118

The revelation that Richard Nixon had used the CIA to try to obstruct a federal investigation into the Watergate burglary in 1972 triggered a crisis within the agency and a series of investigations into its activities over the preceding twenty years. The resulting reports, known as the “Family Jewels,” identified a damning litany of illegal actions far outside the CIA’s charter, including wiretapping of journalists, burglaries, assassination plots, experimentation on humans, collusion with the Mafia, and systematic domestic surveillance of civilians.
Page: 125

Paranoia is born of propaganda, ignorance, secrecy, and fear.
Page: 129

Everyone rehearses their recollections, believing that the more often an event is remembered, the closer we come to its reality. This is not always true. Most people tell a version of the past, and then either stick to or embellish it. Gordievsky’s powers of recall were different. He was not just consistent, but progressive and accreting.
Page: 134

The KGB of the 1970s was clearly not what it had been a generation earlier. The ideological fervor of the 1930s, which had seen the recruitment of so many committed agents, had been replaced by a terrified conformity, which produced a very different sort of spy. It remained vast, well funded, and ruthless, and it could still call on some of the brightest and best recruits. But its ranks now also included many time servers and bootlickers, lazy careerists with little imagination. The KGB was still a dangerous antagonist, but its vulnerabilities and deficiencies were now exposed.
Page: 138

Early in 1981, the KGB carried out an analysis of the geopolitical situation, using a newly developed computer program, and concluded that “the correlation of world forces” was moving in favor of the West. Soviet intervention in Afghanistan was proving costly, Cuba was draining Soviet funds, the CIA was launching aggressive covert action against the USSR, and the US was undergoing a major military buildup: the Soviet Union seemed to be losing the Cold War, and, like a boxer exhausted by long years of sparring, the Kremlin feared that a single, brutal sucker punch could end the contest.
Page: 142

In launching Operation RYAN, Andropov broke the first rule of intelligence: never ask for confirmation of something you already believe.
Page: 144

The Kremlin, however, assuming that capitalism penetrated every aspect of Western life, believed that a “blood bank” was, in fact, a bank, where blood could be bought and sold. No one in the KGB outstations dared to draw attention to this elemental misunderstanding. In a craven and hierarchical organization, the only thing more dangerous than revealing your own ignorance is to draw attention to the stupidity of the boss.
Page: 145

Almost any human behavior, if scrutinized sufficiently intensely, can begin to seem suspicious: a light left on in the Foreign Office, a parking shortage at the Ministry of Defence, a potentially bellicose bishop.
Page: 146

This was a business that involved heavy drinking, on both sides of the Cold War, and officers and agents frequently took refuge from the stress in the blurring of reality that alcohol can bring.
Page: 168

Intelligence sharing was a two-way street, but in the opinion of some CIA officers America had a right to know everything.
Page: 199

The cash could simply have been handed over to the illegal on arrival, but the KGB never opted for simplicity when something more elaborate could be devised. Operation GROUND was an object lesson in overcomplication.
Page: 219

loyalty? In all totalitarian cultures, the individual is encouraged to consider the interests of society before personal welfare: from Nazi Germany to Communist Russia to Cambodia under the Khmer Rouge and North Korea today, a willingness to betray those nearest to you for the greater good was the ultimate mark of committed citizenship and ideological purity.
Page: 248

The decision to leave his family behind was either an act of monumental self-sacrifice, or one of selfish self-preservation, or both. He told himself he had no choice, which is what we all tell ourselves when forced to make a terrible choice.
Page: 249

There is no evidence, however, that the surveillance team did this on the morning of July 20. Instead, they seem to have done what timeservers do in every autocracy that punishes honest failure: they did nothing at all, and hoped the problem would go away.
Page: 282

“I had been under surveillance for years, and we had got to know the way the KGB Seventh Directorate thought. While they often knew that you knew they were around, what really offended and embarrassed them was when someone deliberately indicated that he had spotted them: psychologically, no surveillance team likes to be shown up by its target as obvious and incompetent. They hate you putting two fingers up, and saying in effect: ‘We know you are there and we know what you’re up to.’ ” On principle, Ascot always ignored surveillance, however overt. Now, for the first time, he broke his own rule.
Page: 289