The Devil's Star« an older post
a newer one »The Way Into Chaos
Book Notes kitt decided around 21:12 on 29 September 2015 to publish this: 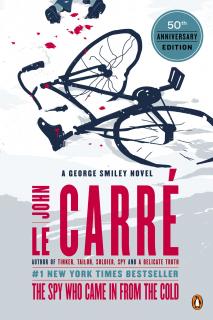 Okay, another book of Mom's. I feel this is one of those "classic" books I should have already read already, along with some Lovecraft (check) and Dostoyevsky (check). So, through this slog of a month (holy moly, barely any books this month, and yet I am right on schedule with my original goal of one book a week - goals are weird sometimes), I finished this one just as the month was ending.

Holy crap, the ending of this book.

This book is worth reading for the ending alone.

The book, aptly titled, is about a spy who came in from the cold, which is to say, he'd been a spy in the post World War II, East vs West Berlin, Cold War not-quite-around era. A large part of the spy's network had been killed off, with the protagonist, Alec Leamas witnessing the death at the beginning of the book of his last spy, who almost got out of East Berlin.

So, for Alec to retire, he needed to do one more job, one more before he could come home, a final clean up job. It meant defecting, so he did. In the process he fell in love.

Such things never end well in the spy world.

There were many references to George Smiley, which I vaguely recall as the hero in a series of spy books that a high school classmate of mine really liked and devoured. I suspect, as a result, that this is an offshoot of that series, tangential to the series, maybe a wrap up.

I enjoyed the book, as far as spies doing spy things and the uncomfortable secrecy and the people being cruel to people sort of things involved in those spy things can go. If spy thrillers are your thing, and you haven't already read a bunch, this is a good one to start with.

But that ending. Wow.