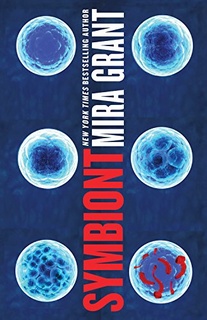 I had read Parasite from Mira Grant when it came out, a number of years ago. I was such a fan of her Feed trilogy and independently fascinated by the different forms of zombie fiction, so was going to read this trilogy, too.

I recall thinking Parasite was okay, not great, not as good as the Feed books, but okay. This one, ugh, this one had too many words.

Do you really need two pages of description about how you walked into a building, your brother was standing behind a plant in the entrance way, watching you, and stepped out when he recognized you? I would argue, YOU DON'T.

And YES, yes, yes, yes, we know that Sherman is a bad guy and that he did bad things, and yes, everything is about survival. Yes, we know this, because you've told us a million times.

I swear this book was written as 20 separate stories, with Grant (yes, not her real name), forgetting the previous books when writing each one. So much repetition over and over again about the same things. Too. Many. Words.

This is book two of a trilogy. I'll read the next book because my philosophy on series of which I have enjoyed one book, is that two bad books in a row and I'll stop. This would be book one of the two that would make me stop reading.

You will not find information to exonerate me. You may find more proof that I should be reviled by history. It’s all right. The broken doors are open now, and I was the one who opened them.
Page 4

Adam nodded. “Mom says you know someone is getting tired of living when they stop asking questions.”
Page 27

disheveled. “I don’t think either of us has had a life that made sense in years,” he said. “We’ve just started noticing how strange everything is.”
Page 55

I was standing in the present, and when you’re only thinking about today, history is always so far away.
Page 61

It was easy to pretend to follow social rules when you didn’t really believe that they applied to you.
Page 69

You can move out any time you need to, and that means pain is nothing but an inconvenience. Now breathe.
Page 88

Being a human was hard. It was sharp and cold and filled with choices that had no good outcomes, just varying shades and shapes of badness. No matter what you chose, you were choosing wrong for someone.
Page 157

“Humans have been trying to clean up the world ever since they figured out soap and water. I think that’s what their Devil really taught them. There’s a lot of bollocks in the Bible about humans learning modesty and shame when they first sinned, but I don’t think they went ‘oh no, I’m naked.’ I think they went ‘oh no, I’m filthy.’ That was the true fall from grace. You can’t be a part of nature if you’re trying to be clean all the time.”
Page 189

It is an unfortunate truth that the inconvenient, when ignored, tends to become worse rather than becoming better.
Page 314

“Help is commonly reciprocal between equals, a matter of duty from inferiors, and a matter of obligation from superiors,” said Anna, in the same calm, barely inflected tone that she had used before.
Page 345

“We become entirely different people every seven years, and our minds let it happen because it’s slow, it’s graceful, and even then, we cling to childhood pleasures and high school goals like they somehow had more relevance just because they happened earlier in our developmental cycles."
Page 353

It’s not selfish to want to exist. It’s a function of the survival instinct buried in all complicated organisms.”
Page 362

The reality of her original identity’s death was years behind her, taking most of the anger with it. But not, I realized, the rage. They were two different beasts, close enough to seem identical when seen together, but unique enough that one could endure without the other.
Page 378

“Because it’s easier. It’s so much easier to say, ‘This is a story, and there are heroes and villains, and there’s an ending, and when we get there the book will close and we’ll all live happily ever after.’”
Page 394

It would be terrible to have an entire species with bellies full of mingled love and hate, anger and fear, walking around and thinking that they controlled the world.
Page 399

Every human was the result of social and cultural recombination, picking up a turn of phrase here, an idea or a preconception there, the same way bacteria picked up and traded genes. Nothing was purely its own self. Nothing would ever want to be.
Page 400

Even when things were at their worst, some people could be counted on to be absolutely terrible.
Page 425

This day just kept on getting worse, and I was ready for it to stop anytime now.
Page 438

The urge to survive is a powerful thing. It can drive even the most primitive of organisms to do things that should have been impossible, because they don’t want to die.
Page 449

That’s my fault as much as it is anyone else’s, but as I do not have the power to revise the past, I choose not to dwell on that.
Page 479

“I promise I’ll do my best not to,” he said, and that was somehow better than an outright pledge to never do it, ever, under any circumstances would have been: he was human, and fallible, just like all of us. He could make mistakes. Pretending that was never going to happen wouldn’t do anybody any good, but it could leave us unprepared for what was yet to come.
Page 496

I looked up a couple other reviews of this book and HEY WHAT DO YOU KNOW other people didn't like it, ESPECIALLY compared to Grant's Feed/Newsflesh series.