One Hundred Years of Solitude« an older post
a newer one »The Shape of Water
Book Notes Instead of being asleep at 09:07 on 26 June 2019, kitt created this: 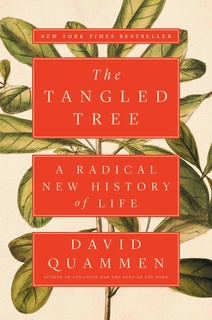 This book was a Caltech Book Club selection, which is to say, I read it and more than a little bit didn't participate in the discussion. I am uncertain what to do in the online book clubs, and so, happily read the comments, and struggle with adding any insights.

And none of that is about this book, which is delightful. I recommend a read if only for the HORIZONTAL TRANSFER OF GENES. Like, wait, what? Genes do what? Yeah, that.

I enjoyed the book (even though in books that don't write women out of history, we learn that Crick's aha moment was actually inspired by a woman, no credit given), which goes through the development of evolutionary genetics. What? A science history book? Why, yes, including the parts of "oh, that's not correct," which is great. Science is never linear.

Recommend the book, worth a read.

There was class stratification in science as in every other part of Victorian British society.
Location 517

Into the 1860 edition of his Elementary Geology, he inserted his rejoinder to Darwin’s book, based mainly on proof by authority. He noted that Pictet saw no evidence for transmutation in the fossil record of fishes.
Location 579

That was characteristic of Crick—so brilliant and recklessly imaginative that he sometimes influenced the course of biology even with his elbows.
Location 593

Then suddenly Brenner let out a “yelp.” He began talking fast. Crick began talking back just as fast. Everybody else in the room watched in amazement. Brenner had seen the answer, and Crick had seen him see it.
Location 812

“What I propose to do is not elegant science by my definition,” he confided to Crick. Scientific elegance lay in generating the minimum of data needed to answer a question. His approach would be more of a slog.
Location 841

Researchers at the time were so reluctant to believe that bacterial genes could be transferred into animal genomes that, before publishing a new genome sequence, they routinely edited out the bacterial stretches.
Location 3729

One consequence, unsuspected before but suggested by this Hotopp study in 2013, is that bits of naked bacterial DNA, possibly from broken-open bacterial cells, may often get integrated into cells (not necessarily germline cells) of a person’s body. Into cells of the stomach lining, for instance. Or blood cells. By “integrated,” what I mean is, not just absorbed or injected into the human cell but patched into its DNA. The good news about any such horizontal transfer, bacterial DNA into nongermline human cells, is that the change isn’t heritable. It won’t be passed to future generations. The bad news is that it might trigger cancer. How? By disrupting the cell genome in a way that allows runaway cell replication.
Location 3750

Hotopp and her colleagues looked especially at two kinds of human cancer, acute myeloid leukemia and stomach adenocarcinoma. In the leukemia cell genomes, they found stretches resembling the DNA of Acinetobacter bacteria, a group that includes infectious forms often picked up in hospitals.
Location 3755

The alternate hypothesis offered by Hotopp’s team, supported by genome data and now crying for further investigation, is that horizontal transfer of bacterial DNA may discombobulate one human cell, in the stomach, in the blood, wherever, and turn it cancerous.
Location 3761

“I have biologists who come into my office,” she said, “and it’s just, like, ‘No, it’s got to be an artifact. You have to be able to explain it some other way.’ ” Animals don’t experience horizontal gene transfer, period. Humans, certainly not. “Do you ever say to them, ‘Is that a faith-based statement?’ ” I asked. What I meant was: it seemed almost as though the Weismann barrier had become a theological dogma. She mused about that for a moment and allowed that some scientists did appear to be more religious about science than about religion. A touch of faith-based genomics? “I think it is,” she said.
Location 3767

It reminded everyone that the prospect of horizontal gene transfer from bacteria (or other microbes) into the human genome is a boggling thing, a trespass on our sense of identity, and an improbability against which there should ever be a high standard of proof.
Location 3819

Kilogram quantities, biomass: that’s what “Eureka!” sounds like from the mouth of a microbiologist.
Location 4549

This is what happens in science. Paradigms shift, but seldom twice in the life and mind of one scientist.
Location 4622

Woese hated the fogginess, she told me. He wanted to be able to think. There was nothing—no medical fate, no waves of pain—worse to him than deprivation of his ability to think. That was his life.
Location 5510