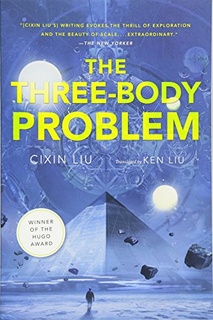 Book 1 of the Remembrance of Earth's Past series.

I have lost my quotes for this book. I don't know where they are, and I find that a little offputting about my processes, because this book has some seriously good ideas when thinking about people, the human condition, and how we treat each other. Imagine, for example, living through the blood bath of a war or revolution, or worse, a "cultural revolution" where anyone who is capable of thinking is killed off in favor of those incapable of thinking but GREAT at the herd mentality. Come to think of it, we haven't progressed much past that point, and didn't learn much from that event, did we?

Anyway, imagine living through that and coming out on the other side hating people so much for the death of your parent that when faced with the choice of humanity or another species all together, you choose the destruction of mankind. I think that imagining might have been a spoiler. I'm not sure.

This book was not what I was expecting it to be, and it was glorious. The reading was a little slow to start, I suspect because I was trying to figure out the physics and the ramifications of the changes to the fundamental laws, but reading slightly faster made the book enjoyable and the slower parts fine, because they weren't THAT much slower.

This is the first Chinese sci-fi I've read. When I mentioned the basics of the plot to a friend of Chinese descent, without telling him the book was Chinese in origin, he laughed at it and said, "That sounds Chinese!" When I revealed it actually was Chinese, he added the book to his list to read. So, yes, accurately Chinese, and delightfully sci-fi.

I enjoyed the book and look forward to the next book in the series.