Modern Loss« an older post
a newer one »Smoke In The Sun
Book Notes Written with a loving hand by kitt some time around 20:45 on 11 October 2018 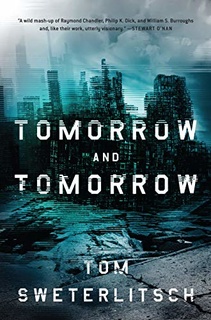 I have the book pile problem of having 5 books due at the library in the next eight days, which means that I have less than two days to read each of these books. Which is unfortunate, as Tomorrow and Tomorrow is a book I want to linger over, sit with, ponder. If I want to read these other 4 books before they return to the library, however, I'm not going to linger.

Cal recommended this book when we were at XOXO this year. We were exchanging reading lists (hoo boy, I thought I was doing well at a hundred books a year, I read at half Cal's pace), and he suggested this book. It's heavy, he warned me, don't read it if you're not in a good place.

Which was good advice.

The book is a dystopian future, science fiction, murder mystery novel. It is also a book about grief, about avoiding an all consuming loss, until you can't, and then dealing with it.

Which is why the timing of the book was great. That and after five non-fiction books in a row, I was ready for some fiction.

Anyway, the main character, Blaxton, investigates deaths in the Archive, a fully immersive reconstruction of the world, stitched together from all the digital recordings available of a given area and time. Most people have implants to immerse in this reconstruction, but of course said world is full of ads, because, yeah, that's the way it works, we can't have nice things.

Blaxton comes across an unreported death, becomes obsessed with solving her murder, and his already unravelled life come undone.

The plot is so well done. The grief and heart-ache is well conveyed. The whole plot is well put together, lots of early clues for the reader, along with "ohhhhhh" at the reveal. I strongly recommend this book, if you're in a good place to read a dystopian future, science fiction, murder mystery novel. If you're not in a good place, wait until you are, then read it.

Yes, where the world is going, this is a reasonable projection of the presidency.

She touches herself and the talking heads comment: Everywhere, Americans have been given the choice between Love and Filth, and they have uniformly chosen Filth.
Page 16

How prescient of Sweterlitsch, though I suspect he wasn't expecting to be so acccurate so soon.

“It’s all right to cry,” says the leader. “Let it out. Talk with us, share your story. Hearing each other’s stories helps us to understand we’re not alone. We were all away from friends and family when it happened. We’ve all lost everything. We haven’t been uniquely chosen to suffer—”

“What does it matter if I die?”

“You don’t understand,” I tell him, knowing that he does understand, that they all understand.
Page 32

“I schedule regular times to visit my memories of Kitty in the Archive,” he says. “Kitty was my wife of thirty-nine years. Katherine."
Page 53

I cracked up at this.

“We’ve been making memory maps,” Simka explained. “You draw the house you grew up in and write in everything you can remember about it, every detail. You’d be surprised how much you remember when you’re filling in a memory map, the specificity of the details. The kids never have enough room to write everything they want, so we journal, too—”
Page 59

This is an interesting exercise, by the way.

“Addiction and recovery from depression are difficult. There isn’t a quick fix—even complete dialysis and Adware reconditioning don’t treat the underlying causes of your addiction. You’ll have to work at this, Dominic. As they say, ‘You’re gonna carry that weight—’”
Page 62

People drift through the café, once captured inadvertently on security cameras or retinal cams, their profiles pulled from cloud storage, archived in the City because of the Right to Remember Act and used to populate these places, even these minor corners of the City.
Page 69

What would our lives have been like? Never sure, but I try to be realistic with my regrets, memories like these affording me a window, I think, to my life as it was never lived.
Page 70

Faces in passing cars are only blurs—petals on a wet, black bough—impressions inadvertently captured in Peyton’s background and sculpted here as part of the environment. These faces unnerve me. Faceless. I feel like they try to catch my attention. I feel like they want me to notice them, to notice them specifically, to turn my attention from Peyton and fill in their features with some streak of memory, but there’s nothing to remember about them, no details or memories I have that can flesh them out. I’ve never known these faces and they pass away in the peripherals.
Page 100

Much of politics is simply manipulating broad symbols.
Page 124

“When I talk with people who are suffering,” says Timothy, “they often tell me that they’re comforted because Christ associated Himself with sinners. Prostitutes and taxmen. Drinkers. The thief who was crucified with Him.

They think they will somehow transcend the world, somehow continue sinning but find a spiritual perfection when the time comes because they believe their soul is pure so it doesn’t matter if their body is corrupt.

That doesn’t mean turning our backs to the world—it means just the opposite. He demanded the twelve abandon their lives in order so they might fully embrace the incarnation. He demands this of us—”
Page 129

We were alone that evening, coming to terms with our loss, with a miscarriage just like the thousands of other miscarriages that occur every day, every year, but ours so unlike the others because it was our daughter, our child that never was.
Page 147

Night by the time we drive through Ohio, the landscape changing to something as forgotten but familiar as my mother’s voice—flatlands giving way to the warp of fields and the hills that will become the mountains of what was once Pittsburgh.
Page 258

I understand the feeling of returning to the landscape as familiar as my mother's voice.

She waved as the bus pulled away and I walked home—the city quiet, everything shrouded in a profound white silence. I was so happy that night—an ecstatic contentment in that silence, a feeling like I’d come home, like I’d discovered where home was.
Page 270

The doctors keep me updated—there’s a trio, one in Boston, the other two in Mumbai, faces on HD screens mounted on a roving turret. A doctor rolls into my room every other day or so, but since the turret webcam’s loose on its mounting, the doctors rarely face me when one of them speaks.
Page 316

This image seems just so right: teleprescence but broken.

“We’re watching the follies of man,” she says. “Why would I want to be closer than I am now? Besides, I got better stuff to do, like teaching you to piss for yourself—”
Page 317