The Stone Sky« an older post
a newer one »Whispers Underground
Book Notes Instead of being asleep at 22:40 on 21 October 2018, kitt created this: 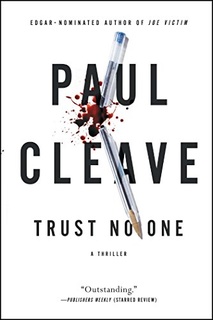 I don't know what I was expecting from this book, and I don't know how it ended up on my reading list, but the book was impressively well done. I enjoyed it.

Basic premise is an author, Jerry Grey, has Alzheimers and is confusing his plots with reality. Most of his books have brutal murders of women in them. Given his dementia, his confessions to the police are met with skepticism.

Except Cleave has this great, underlying, no-one-talk-about it something going along under the plot. Everyone dances around something that happened in the past. Eventually we find out what it was (or figure it out before the reveal), but the plot twists don't stop.

While the ending was a realistic one, "the only one that could have happened," I still wanted to scream "noooooo!" and throw the book, a good sign that I was invested in the story.

Mom agrees with this one being goooood. Strongly recommended.

Every author eventually has a last book—you just didn’t think you were there yet, and you didn’t think it would be a journal.
Page 11

You got the amazing wife, a woman who can put her hand in yours and make you feel whatever it is you need to feel, whether it’s comfort or warmth or excitement or lust, the woman who you wake up to every morning knowing you get to fall asleep with her that night, the woman who can always see the other side of the argument, the woman who teaches you more about life every day.
Page 12

A woman’s body was found an hour ago, and like always when Jerry hears these type of reports it makes him sad to be a human being.
Page 25

"The dementia has an awful way of rewriting your past, Jerry. It’s making the stories from your novels feel like real life to you."
Page 61

Other people get sick, and other people die at much younger ages, but this is you me us we. You’re allowed to be upset for yourself—that’s your right, and you have to admit you’re a little angry at Sandra for getting rid of the one thing that can bring you comfort when nothing else can.
Page 63

Bad news — last night you took a leak in one of the bedrooms. You were halfway through when you suddenly realized you were pissing in the corner of the guest bedroom rather than the bathroom.
Page 96

Jerry doesn’t answer him. There’s nothing you can say to somebody who already has their mind made up.
Page 99

He remembers that — it was a question journalists always used to throw his way. So you’re fascinated by crime. No, he’s not — he likes crime writing, but not crime, and how many times has he pointed out the two are very different animals? It’s like thinking people who watch war movies must love war.
Page 100

He hates malls. Yet he’s always thought that if you took the malls away, society would fall apart.
Page 170

“I can’t make the same mistake again, Jerry. I’m sorry, but I have to take you to the police. We have to let them figure out what’s going on, and most of all we have to make sure you can never hurt anybody else again."
Page 180

... and the human race, well now, they sure do love a good show, don’t they? Especially when it’s at the cost of somebody else.
Page 196

As the father of the bride, having been where you’re sitting now twenty-five years ago, it reminds me of what my own dad said to me back then, a piece of advice I wish I had taken. He said, Jerry, run! Laughter. Genuine laughter, especially from the older folks in the crowd who all can relate to what Jerry is saying.
Page 198

But seriously, folks, as any parent will do when they’re seeing their child getting married, you think back to when it was your own time, you think back and you wonder how the years have gone by so quickly, there are always ups and downs in a relationship, and the older you are the more you’ve been through, and the more you’ve been through the more advice you can give. Of course everybody has advice, a lot of us say My advice is don’t take anybody’s advice, make your own way, and thankfully, folks, that’s not the chestnut of wisdom I’m here to impart.
Page 198

“Jerry... there’s something you need to know." He breaks out in a cold sweat and almost drops the phone. Nothing good ever comes after those words.
Page 227

People say suicide is a selfish act. They say it’s cowardly. People say these things because they don’t understand. It’s actually the opposite. It’s not cowardly, in fact it takes incredible courage. To stare Death in the face and tell him you’re ready... that’s a brave thing.
Page 232

Eva was crying on the phone, and Sandra was too, and even you cried, J-Man.
Page 233

He can remember the way the sun fell into the room, the angle fractionally different every day, the way it would hit and fade the framed King Kong Escapes poster on the wall. Only he wouldn’t see it fade, it faded the same way you don’t notice a child growing every day, but you know it’s happening.
Page 236

How many times has Sandra told them to shut up when they’ve been at the movies, or watching something on TV, because they were unable to stop sharing their predictions?
Page 237

Jerry nods. “Sometimes people say my books are implausible. I remember that." Hans shrugs. “Most crime novels are. If they weren’t, then they’d be no different from real life. People don’t want to read about real life." “This is real life."
Page 238

“People never go to the police," Hans says. “They should, but they never do, because if they did then that would be the end of the story, right? It would be wrapped up by chapter three."
Page 238

"Do you have a warrant?"

“This isn’t a joking matter," one of them says.

“I’m not joking. I’m telling you he isn’t here, and you’re standing on my property calling me a liar and asking if I mind having my rights violated."
Page 245

There is a world of difference, Jerry thinks, between making shit up and making shit happen.
Page 266

How much money does the man pump into war, and tourism, and sport, compared to Alzheimer’s research?
Page 288

That was the life of a writer — keep writing, keep moving forward, stay ahead of the crowd because if you don’t get that story written down then somebody else would.
Page 302

However, he has once committed what I’ve always thought of as the cardinal sin, and that’s to ask Where do you get your ideas?, as if I order a box online every year and have an assistant weed out the bad ones.
Page 304