The Cruel Prince« an older post
a newer one »The Book of Dust
Book Notes kitt decided around 19:53 on 9 April 2018 to publish this: 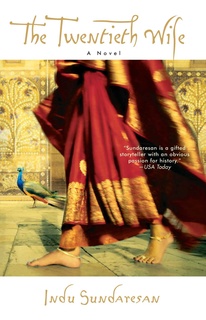 Along with a couple other books, I picked this book up from the library because it was listed in an Audible "First Book In A Series" sale. Yay for libraries, saving me $25!

I did not particularly enjoy this book. The fictionalized story part I don't mind, and can overlook. The perfect hair, perfect teeth, perfect man swooning of Mehrunnisa / Mehr-Un-Nisa for Salim, however, I do mind.

That and the sudden insertion of elaborate descriptions of the foods being placed in front of the Prince, without context or lead-in just BOOM let's talk food! was too jarring to read easily.

I liked the exposure of a new part of Indian / Pakistani history. I went down the Wikipedia rabbit hole for a while, which I appreciate this book for the introduction. The book itself, however, not a fan. If you're a fan of swooning, Indian history, and historical fiction, sure, this book is a good one to add to your list. Otherwise, skip it.

Ghias would not even think of her, not even by name. What use was it, when someone else would look after her?
Page 7

Imagine the internal devastation resulting from the knowledge that you couldn't take care of your own child?

Ghias stared at him, unable to believe what he had just heard. After so much trouble, when one problem seemed to come at the heel of the other, here was a gift from Allah.
Page 10

“Ghias, we must be careful not to teach the girls too much. How will they ever find husbands if they are too learned? The less they know, the less they will want of the outside world. Mehrunnisa already insists that she should be allowed to go out with you.”

Ghias smiled slowly. “I know. She asks why a woman has to stay in the house when a man can go and come as he pleases.”
Page 48

The older she became — she was now fourteen — the more Bapa and Maji imposed restrictions on her. Do not go out too much; keep your voice down; pull your veil over your head when a strange man, one not of the family, comes to visit. These restrictions would be part of her life from now on, for she was a woman.
Page 51

He had been content until now to be heir to the throne. But during the last few months, his courtiers had pointed out, quite rightly, Akbar’s extreme injustice in remaining steadfastly alive while Prince Salim was mature enough to take over the duties of state.
Page 55

More glaring from me. As if a parent owes anything to a child upon death.

He had everything he could want: handsome looks; virility, which had been proved twice by the birth of two sons; several wives; and an equal number of concubines. Yet, he had nothing without the crown. He should rebel, as Mahabat Khan and the others had suggested.
Page 55

What a burden the crown was, he thought. Kings had always fought brothers and fathers and sons for it.
Page 64

“Listen and learn, Mehrunnisa,” she said. “A woman must not be completely reliant on a man, either for money or for love.”
Page 67

"We have decided to honor him, Ghias. And what better way to do so than to give him the hand of your daughter in marriage? It will be a good alliance."
Page 76

Okay, this was completely rage-inducing. I know it is a pervading belief, that daughters are property of their fathers, but it is so completely and totally wrong.

"But daughters belong to someone else, right from their birth. We are only temporary guardians of girl children, beta,” Asmat said. “They grow up; they marry. They go to their real homes. They have children of their own.”
Page 112

“When you go home tomorrow, you must tell Ali Quli. He should have been the first to know. There must be no sense of impropriety in what you do, Nisa. No one should be able to point a finger and say that what you did was wrong. Appearances must be maintained at all costs.” Mehrunnisa sighed.

There were always strictures in society: how one must live, eat, even what to talk about and what to keep silent on. When she had been younger it had been easier, sheltered as she was under Bapa and Maji. But now, as a married woman, she came under very close scrutiny.
Page 116

When her hands and her mind were busy, she did not have time to think — of what might have been.
Page 116

Maji had always been practical. There was too much else to do to spend hours in idle contemplation of how life could have turned out, if not for this or for that.
Page 117

Now she would no longer have to watch other women with their children and feel as though the ache would consume her. She too would have a child, so she could grow old and fretful and have that child indulge her whims. Mehrunnisa laughed.
Page 118

When they reached the house, Mehrunnisa saw most of the servants gathered in a crowd in the front courtyard, their faces hostile. Some of these women were mothers themselves. Surely they would have more knowledge of childbirth and birthing than she did? Why did they not go to help Yasmin?

It was nothing but prejudice and sloth and a small kind of meanness. Yasmin was an orphan with no protector, pregnant without being married. They had ostracized her for the last six months.

And Mehrunnisa had allowed them to, angry herself, in a deep deep pain that this woman should carry her husband’s child, while she could not keep one within her for more than a few months.
Page 148

Now, with his desire for a son, Mehrunnisa was tormented. What if she did not give him a son?
Page 215

“Maji...” Mehrunnisa whispered over and over again, wanting the cool comfort of her mother’s hand on her brow, wanting to tell her of the fears that ambushed her.
Page 216

For most, there is no safer place in this world than in a mother's arms.

The initial euphoria of being an Emperor had worn off, and the enormity of his obligations now came crashing on Jahangir. Millions of people depended on him.
Page 218

“I want it now. It is rightfully mine; my father has no right to rule. Even Emperor Akbar wished it.”
Page 222

Life at court was this unending circle of give and take. You took from one person and gave something back — to that person, or another.
Page 282

His was one of the greatest minds in the empire, but even he was fallible... and human.
Page 285

Ghias watched her in silence, forcing back his own tears. What good would crying do? Ease the heartache for a few hours, perhaps, but the worry would always be there.
Page 301

Why Allah, why did trouble come to ambush when one was already down?
Page 301

“There is only one way.” Nuruddin glanced back again to assure himself that the guards were out of earshot.
Page 308

No. There is rarely "only one way," especially in the games of power.

The zenana was always thus: prying eyes everywhere, whispered conversations in the air. To try and escape it was futile. The only thing to do was to live with it as best as one could—alert, vigilant, for ignoring it was also dangerous.
Page 333

There was already talk about her wiles in capturing the Emperor’s interest and holding it for so long. She was a sorceress; she had cast a spell on him. These rumors were hurtful and mean, but they came from mouths that were otherwise filled with envy.
Page 345