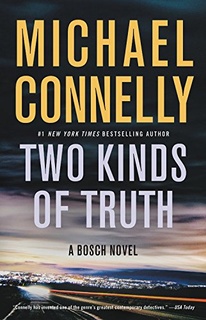 Harry Bosch, Book 22, by my count, which, again, is inaccurate, but we're still going with it.

YEEHAW, I am, once again, all caught up in Bosch's world, having read these last three books. Yeah, the Lincoln Lawyer is in these books, but that's kinda unsurprising to anyone who is growing older: the older you are, the more you want your family around, for whatever definition of family works for you. Why would a fictional detective be any different? Answer: he wouldn't be.

So, yeah, I'm caught up. And Harry (this Harry, anyway, there are four you know) seems to have found his place: a department where he's respected and wanted and, most of all, believed when the shit hits the fan.

Slight spoiler alert (but only slight, since I'm spoiling only the first chapter, so I don't think it really counts), but an old case is reopened when a guy Bosch put away thirty years before is petitioning for release on the grounds of false imprisonment based on new DNA data. The question becomes where did this new DNA that was tested come from.

I know, I know, you're thinking TUNNELS! and BAD COPS! but it actually wasn't (I'm shocked, too), AND I didn't get the "how was this new DNA placed in a sealed box" technique quite right. My solution would have worked, but it was far too elaborate for what actually happened. Dammit.

If you're a Bosch fan, these last three books have been fun. I've been sick, so they have been fun reads during my "I really can't do anything but lie here" convalescence. If you're not yet a Bosch fan, go ahead and start at the beginning, most of the books are fun.

He knew that there were two kinds of truth in this world, the truth that was the unalterable bedrock of one's life and mission; and the other malleable truth [that] a politician's charlatan's, corrupt lawyer's, and their clients, bent in order to serve whatever purpose was at hand.
Chapter 13