Wanderers« an older post
a newer one »The Punch Escrow
Book Notes Written with a loving hand by kitt some time around 22:26 on 11 August 2019 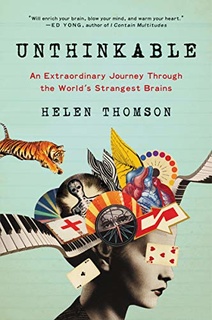 A short bit ago, maybe last summer, I bought Bob a book that he was considering for PALAC. He was going to read the book first, as the leader for any book group should do, and was a bit frustrated that it wasn't available at the library for a while. So, I bought the book for him. He didn't end up using the book for the book group, as it was considered too technical. The group, however, ended up using this book for their science book discussion that quarter.

Unthinkable tells the reader about eight different head / brain injuries, then discusses what we have learned as a result of those injuries. As a bonus for many of the brain injuries and lessons learned, Thomson includes parts of "how you, too, can experience this weird brain phenomenon!" which I found entertaining. The book isn't a difficult read, and covers a few stories that are common in other books on thinking and brain injuries (hello, Phineas Gage, the most talked about brain injury ever in American culture).

Most amusing to me was the story of The Jumping Frenchmen of Maine, as they were also mentioned in Wanders as a neuropsychiatric disorder possibly bacteria and viral in origin. Turns out, no, more likely it was a conditioned response, which makes the brain both our friend and our "enemy." Also, people are jerks.

It was a fun read, not technical, but a good introduction to brains on the outside of "normal," and the inside of "fascinating." Recommended.

For the majority of us, our most vivid memories are those that have some kind of emotional content.

They essentially tell the rest of the brain, “these events are important, remember them.” This in turn makes the memory of that event more easily recalled at a later date.
Location: 460

THROUGHOUT SCHOOL, SHARON CONTINUED to hide her problem from her friends and family. The seeds of condemnation planted by her mother at such a young age had clearly taken hold. I feel a wave of sympathy. Sharon is so likable—so friendly, funny and intelligent. I’m amazed she kept this to herself for so long. Sharon was almost thirty before her secret came out in the open.
Location: 880

“I’ve always been silly and funny because it misdirected people away from the things I was hiding. Everyone always said, ‘You’re always in such a good mood.’ They didn’t know that I would go home at night and cry.
Location: 994

THE RELATIONSHIP BETWEEN COLOR and emotion is well established in the animal kingdom. Female animals often use the color red to signal hormonal changes in their body associated with fertility, for example. Certain male primates show red following a surge of testosterone in their bloodstream, due to aggression or as a show of dominance. Testosterone suppresses the immune system, so the flush of red tells any females that the male must be in good health to cope with such deficits.
Location: 1,189

Evolutionary anthropologists at Durham University and the University of Plymouth wondered whether wearing a red shirt might exploit our innate response to the color red and so influence the outcomes of sporting contests. They studied fifty-five years’ worth of English football league results, and found that teams whose home colors were red won 2 percent more often than teams who wore blue or white, and 3 percent more often than those who wore yellow or orange.
Location: 1,202

In fact, across a range of sports, wearing red is consistently associated with a higher probability of winning.
Location: 1,206

Why Mischief's colors are red and whatever. Thanks, Doyle!

Dopamine is used all over the brain and is important for motivation and producing a drive toward things that make you happy. If you have too much dopamine, though, it can lead to disinhibited behavior.
Location: 1,723

As you might expect, when the roles were suited to their brains the teams performed best. But here’s the rub: this occurred only when the task was completed in silence.

When the researchers watched back the trials, they discovered that each person quickly took over the other’s role, helping them to achieve their assignment. In other words, complete strangers had spontaneously discovered their strengths and weaknesses and modified their behavior to get a job done.
Location: 1,789

For instance, if you come across a problem that you can’t solve, try thinking about it using the kind of strategy that doesn’t come easily to you. “It takes more effort to think in a different mode,” says Kosslyn, “but anyone can drop into any mode if you really try.”
Location: 1,796

It’s a dangerous misperception among reporters, the public and policymakers that mental illness is at the root of violence.
Location: 2,236

“Most people with mental illness are not violent toward others and most violence is not caused by mental illness,” says McGinty.
Location: 2,239

In 2006, Laureys and his colleague Adrian Owen developed a test to check whether someone in an apparent vegetative state could in fact follow orders, by inviting them to think about moving around their house or playing tennis. These two thoughts produce very different patterns of activity in the brain, which the team could identify using brain scans. Their first patient—a twenty-three-year-old woman who had fulfilled all the criteria for vegetative state after a road traffic accident—was able to produce the two patterns of brain activity on request. Later they discovered she was very much aware of her surroundings, despite not being able to move, because she was able to answer their questions by attributing the two different thoughts (thinking about moving around her house or playing tennis) to the words “yes” and “no.”
Location: 2,822

It was the first sign that tactile stimulation isn’t always necessary for us to perceive the sensation of touch—in some conditions vision alone is sufficient.
Location: 3,074

So how do we empathize without burning out? A series of studies, many by Tania Singer at the Max Planck Institute for Human Cognitive and Brain Sciences, in Leipzig, Germany, suggests we should transform empathy into compassion.9 We often use these words interchangeably, but they mean different things. “Compassion” can be described as having caring thoughts for another person—for instance, when a mother reaches out to a screaming child. “Empathy” is putting yourself in another person’s shoes and vicariously experiencing their emotions.
Location: 3,280