Day by Day Armageddon« an older post
a newer one »Beyond Exile
Book Notes Instead of being asleep at 21:28 on 15 August 2015, kitt created this: 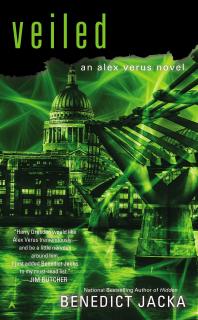 I really like the Alex Verus series, by Benedict Jacka. It might be because of the broken hero, or maybe because the realistic results of various choices. The book reminds us that we make decisions as best we can at the moment, and they don't always turn out to be the best one in the long run, but they are the best at the moment. This series, about Alex Verus, a diviner mage living in London, pretty much exemplifies this concept. Best decision at the moment, hope for the best, so much outside of our control.

This is book six of the series.

There are a lot of explanations in the book about this political structure and that bit of history. There were times where I was thinking, "Ugh, more explanation than I really needed." Given that I read relatively fast, I didn't mind the history lessons, but the fact that I even noticed means there were a large number of them. The history lessons not withstanding, there was enough intrigue and mystery and ACTION that, again, I enjoyed this book.

Though, now that I think about it, this book might not be able to stand on its own... It's a good continuation of the series, but not really a book to pick up to read. If you're reading the series, this isn't the first of two to cause stopping (my rule, two bad books in row in a series and I stop reading the series), but it's not a stand-alone book. Read books 1-5 first.