They Both Die At The End« an older post
a newer one »The Art of Fielding
Book Notes kitt decided around 22:13 on 15 December 2017 to publish this: 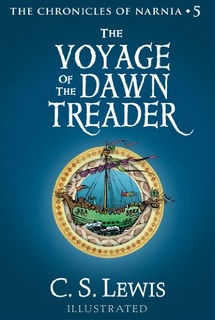 This is Book 5 of The Chronicles of Narnia.

In terms of Christian allegory and stories with morals, this book pretty much hits one upside the head with the Sledgehammer of God. There's no light hand in this story, to be sure.

Continuing the Narnia tale, Lucy and Edmund go back to Narnia, along with their cousin Eustace, who's the 1950's model for Dudley Dursley. He's a little shit, know-it-all, arrogant, lazy kid. We could call him a Well Actually and be accurate. He goes off by himself, turns himself into a dragon, learns his lesson through loneliness and loss of connection with all his human friends - why they didn't immediately kill the dragon flying over the camp? - and needs to be restored only through the grace of Aslan washing away his sins in special water.

And then he drops from the story.

There are a number of other smaller lessons learned, don't eavesdrop on others, turn towards God for strength, getting everything you want is a Bad Thing™, regaining your throne is as easy as walking into the top government house and declaring you are the king works every time even when you're a slave, and, for all the flat-earthers, Narnia is flat with the oceans having an edge.

One of my frustrations with the book is Lord Rhoop, who was found on Dark Island, where your dreams (literal dreams, including nightmares, not daydreams) come true. He escaped, yay he was rescued, and HE LEFT OR LOST ALL HIS MEN ON THAT ISLAND. They celebrate this guy's rescue, but he was a horrible leader, all of his men were dead or left for dead. This is a horrible result. None of the men who went out with the seven lords of Narnia were ever found. So, in Narnia, the only people who matter are named royalty?

But when she looked back at the opening words of the spell, there in the middle of the writing, where she felt quite sure there had been no picture before, she found the great face of a lion, of The Lion, Aslan himself, staring into hers. It was painted such a bright gold that it seemed to be coming toward her out of the page; and indeed she never was quite sure afterward that it hadn’t really moved a little. At any rate she knew the expression on his face quite well. He was growling and you could see most of his teeth. She became horribly afraid and turned over the page at once.
Page 165

And here's an example the sledgehammer shows up. Oh, look, Lucy is doing something she isn't supposed to do, and HEY LOOK, God^H^H^HAslan is watching here, insisting she do the right thing.

Now Lucy had wanted very badly to try the other spell, the one that made you beautiful beyond the lot of mortals. So she felt that to make up for not having said it, she really would say this one. And all in a hurry, for fear her mind would change, she said the words (nothing will induce me to tell you what they were).
Page 165

“Well,” said Lucy to herself, “I did think better of her than that. And I did all sorts of things for her last term, and I stuck to her when not many other girls would. And she knows it too. And to Anne Featherstone, of all people! I wonder are all my friends the same? There are lots of other pictures. No. I won’t look at any more. I won’t, I won’t"—and with a great effort she turned over the page, but not before a large, angry tear had splashed on it.
Page 167

“Child,” he said, “I think you have been eavesdropping.”

“You listened to what your two schoolfellows were saying about you.”

“Oh that? I never thought that was eavesdropping, Aslan. Wasn’t it magic?”

“Spying on people by magic is the same as spying on them in any other way. And you have misjudged your friend. She is weak, but she loves you. She was afraid of the older girl and said what she does not mean.”
Page 170

Several of the sailors said things under their breath that sounded like, “Honor be blowed,”
Page 193

This is where dreams — dreams, do you understand — come to life, come real. Not daydreams: dreams.”
Page 197

“Because,” said the Mouse, “this is a very great adventure, and no danger seems to me so great as that of knowing when I get back to Narnia that I left a mystery behind me through fear.”
Page 212

Ramandu. “In this island there is sleep without stint or measure, and sleep in which no faintest footfall of a dream was ever heard. Let him sit beside these other three and drink oblivion till your return.”
Page 228

For the tortured mind, this is heaven.

"A good many who had been anxious enough to get out of the voyage felt quite differently about being left out of it. And of course whenever anyone sailor announced that he had made up his mind to ask for permission to sail, the ones who hadn’t said this felt that they were getting fewer and more uncomfortable. So that before the half-hour was nearly over several people were positively “sucking up” to Drinian and Rhince (at least that was what they called it at my school) to get a good report. And soon there were only three left who didn’t want to go, and those three were trying very hard to persuade others to stay with them. And very shortly after that there was only one left. And in the end he began to be afraid of being left behind all on his own and changed his mind.
Page 233

“Or perhaps there isn’t any bottom. Perhaps it goes down for ever and ever. But whatever it is, won’t it be worth anything just to have looked for one moment beyond the edge of the world.”
Page 252