All Quiet on the Western Front« an older post
a newer one »Unthinkable
Book Notes Instead of being asleep at 19:24 on 3 August 2019, kitt created this: 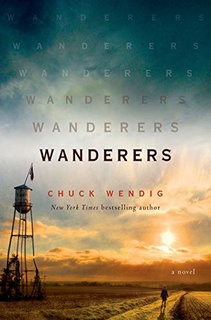 Oh, I enjoyed this book so much. Again, I need to keep notes on why I pick up books, this one may have been on some Book Riot recommendation list, I don't know. It was, however, a zombie book (sorta, but not quite), and we know how much I enjoy a good zombie book.

And no, this one wasn't quite a zombie book in the "brains... braaaaaaaaaaaains" sort of zombie book, but it was sort, in that the Wanderers are a group of people who leave their house with no apparent reason, and start walking. From the East Coast to the West Coast, gathering up more individuals as they walk, their loved ones fluttering around them like insects, trying to help even as the zombies with their single focus on no-one knows what keep walking.

This book gets a lot of things right: AI progress, outbreaks and epidemics, society's breakdown, power manipulation, and human deception. It introduces a number of technologies in a non Hollywood-OMG-we-are-all-going-to-die sort of way, but rather in a here's-how-it-is-let's-deal-with-it sort of way, which I can appreciate.

The only downside to the book is that a number of cultural fuckeries (black men in America and racial discrimination, women in science and tech and gender discrimination, dominance and cultural manipulation) are described in passing, as a gnat buzzing around, rather than the Good Ole Boy network f'ing shutting down the black man, regardless of his doctorate, degree, experience, and ability to save them. I can't say that one could actually incorporate the topics in any more meaningful way, though, and I appreciate their being mentioned at least.

For the most part, the book is engaging and fast-paced. Literally one short section of a chapter made me think, "UGH," the rest was "wheeeee!" Strongly recommended!

“Way it works is this: You go in, and you can talk to it, ask it questions. It won’t answer in words, but rather, with green pulses or red pulses to indicate yes or no, respectively. It can also answer with images and data, but it won’t communicate with you the same way you communicate with it.” “That does not seem like an exact science.” “Benji, even an exact science is not an exact science—surely you know that above others.”
Location: 816

Seriously, who designs an interface where you can ask only yes / no questions? Yes, there are nuances to the language, but you can work through those with a limited vocabulary. Honestly, this is one of the very few WTF parts of this book, where I was pulled out and thought, "That doesn't make sense."

That, she said with almost zero confidence. She made that prediction only out of hope, and hope she knew had like, zero basis in reality.
Location: 1,117

“That’s not—no, that’s not what happened to him. We don’t know what happened to him.” “That instills us with little confidence,” French snapped. Benji offered both hands in a placating gesture. “That is how science and medicine are practiced best, though—we are best when we admit our ignorance up front, and then attempt to fill the darkness of not-knowing with the light of information and knowledge.”
Location: 1,266

He relied on his faith in the numbers. Numbers did not lie. Oh, you could lie using numbers (to which Benji could personally attest), but the numbers themselves were inert, unbiased, and pure.
Location: 1,867

The future wasn’t Newsweek. It was fucking YouTube. And that sucked. Because YouTube—the whole damn internet—was the antithesis of Garlin Gardens. It wasn’t fun and whimsical. Dreams were not made on the internet; they were killed there. By mean, nasty little shits who were all looking to one-up each other. Like crayfish in a bucket, all trying to climb over one another to get to the top.
Location: 2,109

Politics, despite what some believed, was not morality, nor reflective of it.
Location: 2,446

“Hola, chica,” Shana said, going for a fist-bump and blowing it up after, then moving in for the hug.
Location: 2,591

Love this. Totally how I fistbump, too.

“I try not to worry about anything until I need to. Because honestly, what’s the point.”

“Screw that. I worry about everything constantly.”

Worry about everything, maybe not.

“Before anyone asks,” Vargas said, “I don’t have any new information for you about your friends and family members.” Anger ran through Shana. People were supposed to have answers. Experts were supposed to know shit. And they didn’t know anything.
Location: 2,804

Shana knew this angst over the fact life is super unfair, wah, was hyper-fucking-cliché of her, but it was what it was, and she felt what she felt. Things, she thought, were supposed to be better than they were.
Location: 2,809

The moment they made one slip-up, that would give Homeland Security an opening to take over the whole show. They were already itching for it. What if they considered these people a threat? Benji could not imagine he lived in a country that would up and execute these people. Still… History had too many cruel examples of this very thing happening. Worse was: Would people even flinch? Would Americans quietly look away? Or would they rise up in defense of the flock?
Location: 2,869

Well, giving ICE shit happening now, we know which way this one would go.

This, he decided, was a problem for Future Benji.
Location: 2,870

Death was a tragedy. But death was also a data point.
Location: 3,174

That marked her as either someone who had a lot of untapped courage—there was that word again, echoing the conversation with Arav—or someone who cared little for herself or her own life. (He wondered idly, How often do those two things intertwine?)
Location: 3,341