Rise of the Rocket Girls« an older post
a newer one »The Girl in 6E
Book Notes kitt decided around 17:26 on 1 March 2018 to publish this: 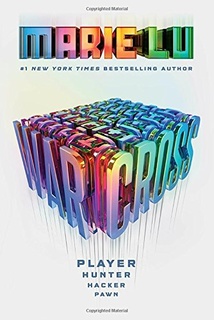 I have no idea how this book came to my awareness. If I had to guess, it was mentioned a number of times on Bookriot, causing me to go, "Hey, science fiction recommended by several people? Okay!" Or something like that.

I enjoyed this book. It had a number of eye-rolling technology descriptions, most notibly the "I can debug things that take mere mortals three weeks to debug, just be unfocusing my eyes and staring at the whole" idea of debugging. Good viruses take weeks if not years to decode, making the idea that someone can unfocus her vision and See The Bad Guy™ an absurd notion.

That said, I love the whole Black Swan aspect of the plot: that someone can glitch into the system with a hack, and end up being invited to the big leagues. I love the idea that merit is worth notice, that it isn't who you know or what hands you've bribed to get to the top. It appeals to the 12 year old girl in me.

I enjoyed the book. The ending, however, had me crying out, "No!" with its abruptness. I'll read the sequel, no way I'll be left hanging on this one. It's a cute Sci-Fi / Virtual Reality book.

Death has a terrible habit of cutting straight through every careful line you’ve drawn between your present and your future.
Location: 313

Everyone has a different way of escaping the dark stillness of their mind.
Location: 472

My contented mood wavers, and abruptly I have a sensation of unbelonging.
Location: 1,043

I bet I’ll be the last one picked.” Ziggy just gives me a good-hearted laugh and pats my shoulder. “What is that saying? Never say never?” she replies. “Besides. Do you remember one year when that player—Leeroy something—actually got drafted into the Stormchasers, even though he always just charged in and messed up his entire team’s play? My God, he was terrible.”
Location: 1,421

And no one goes into the Dark World unless they’re doing something illegal.
Location: 2,130

Hideo shakes his head. “I like to keep my home real. It’s too easy to lose yourself in an illusion,” he replies, nodding at his physical book.
Location: 3,118

His emotions crash against mine, roiling into one, and he is undone in this moment, the reserved, distant, proper version of him stripped away to reveal the part that is unthinking and savage.
Location: 3,194

“You remind me of myself from several years ago,” she says. “I always offered help—but I refused to accept any. My mother scolded me about that. Do you know what she told me? When you refuse to ask for help, it tells others that they also shouldn’t ask for help from you. That you look down on them for needing your help. That you like feeling superior to them. It’s an insult, Emi, to your friends and peers. So don’t be like that. Let us in.”
Location: 3,745

Why would anyone give up the perfect fantasy reality just because they have to give up their freedom? What’s the point of freedom if you’re just living in a miserable reality?
Location: 4,373