No Middle Name« an older post
a newer one »The Last Town
Book Notes Written with a loving hand by kitt some time around 08:58 on 17 June 2017 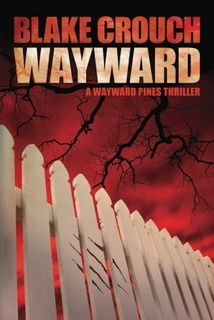 This is book two of The Wayward Pines Trilogy.

A thing about the first book of this series is that the ending felt like the end of the book. I hadn't realized there were two other books when I read the first book until I arrived at the last page of the book and saw the continuation.

This book does that: continues right off from the previous book, starting only two weeks after the previous book ended. The lead character, Ethan Burke, now knows what's going on in Wayward Pines, and has become a part of the town's conspiracy. The conversion makes for an interesting moral twist, given two weeks before, the town was trying to kill him.

We learn a bit more about the people running the show, and the strange twined history of several of the main characters. I enjoyed this book, and immediately picked up the third book in the series. Given that all three books happen in the span of a month or so, reading them in one go wouldn't be unreasonable.

Twitter and Facebook. Ethan didn’t miss those things. Didn’t wish that his son was growing up in a world where people stared at screens all day. Where communication had devolved into the tapping of tiny letters and humanity lived by and large for the endorphin kick from the ping of a received text or a new e-mail.
Page: 26

Gone were the days of— You can be whatever you want to be. Whatever you set your mind to. Just follow your heart and your dreams. Golden-age platitudes of an extinct species.
Page: 27

“‘Before I built a wall I’d ask to know what I was walling in, or walling out.’ Robert Frost wrote that.”
Page: 33

She was my always friend and my sometimes lover. We were at ease with each other, and I didn’t know it was the last time I would ever see her alive.
Page: 61

"When I was seven years old, my parents left me with the sitter one Friday evening. They were going to drive into the city to have dinner and see a show. They never came back.”

“They were killed in a car wreck.”

“Never assume you know where someone else is coming from.”
Page: 78

The most generous blessing and life-destroying curse all wrapped up in the same woman, and despite the pain of the guilt and the knowledge of how it would crush his wife, whom he still loved, the idea of turning away from Kate seemed like a betrayal of his soul.
Page: 112

I understand this sentiment.

Staring through the window screen, she said, “Look, you got something from her that you couldn’t get from me. Some kind of experience beyond ours. I don’t hate you for it. I never did.” She turned from the sink and faced him, steam rising off the surface of the soapy water. Gaither was playing one of Mozart’s piano concertos. “But that doesn’t mean you didn’t hurt me,” she said.
Page: 118

“I wonder if she makes you feel the way you make me feel. You don’t have to try and answer that. So it’s for work, huh?”
Page: 118

She’d had that effect in their relationship too. He’d spend a day with her that felt like bliss in the moment, then come out on the other side unsure of where he stood. Second-guessing everything. He’d never understood if it was a conscious play on her part, or his own failing in letting this woman get so deep and tangled in his head.
Page: 126

“As you’ll find with your son soon enough, letting go is the hardest, greatest thing we can do for them.”
Page: 158

He was playing the Rimsky-Korsakov edition of A Night on Bare Mountain. The frantic and terrifying section had concluded, and he was entering the slow, calming-down movement that conjured up the feeling of daybreak after a night in hell.
Page: 266

I bothered to look this up on YouTube and listen to it. Was worth the time to understand the feeling of daybreak after a night in hell.