Trust No One« an older post
a newer one »Johnny Got His Gun
Book Notes Instead of being asleep at 09:50 on 25 October 2018, kitt created this: 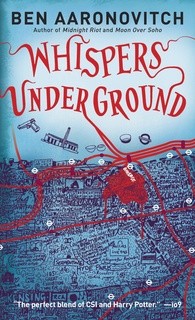 I think I kinda want all my Peter Grant book notes to say the same thing: love the book, love the series, something something rivers, if you enjoy the series keep reading, and, wow, do I love the cultural references, even though I figure I miss more than half of them.

This is book 3 of the Peter Grant series. I enjoyed this book, perhaps less than the other ones, but still more than most books. More Peter Grant, more London references I need to look up, more learning about Peter's journey into learning magic (hey, anyone can learn magic!), more rivers, more world building.

This one features a dead American, which brings over the whole stereotypical American cowboy stuff. Okay, not cowboy, but definitely that FBI, Men in Black stuff. It worked. I was less excited by the eventual who-done-it plot reveal, but that's fine, I don't have to like all of the plot to enjoy most of it.

If you're reading the series, keep reading.

And yes, I did look up plans for a horizontal plug flow reactor.

Acland Burghley, where countless generations of the Peckwater Estate had been educated, including me and Abigail. Or, as Nightingale insists it should be, Abigail and I.
Page 3

Finally! That "So-and-so and me" thing is really tiring when it is poor grammar.

Like young men from the dawn of time, I decided to choose the risk of death over certain humiliation.
Page 5

So just chalk it up to pixie dust or quantum entanglement, which was the same thing as pixie dust except with the word “quantum” in it.
Page 9

People have funny ideas about police officers. For one thing they seem to think we’re perfectly happy to rush into whatever emergency there is without any thought of our own safety. And it’s true that like firefighters and soldiers, we tend to go in the wrong direction vis-à-vis trouble, but it doesn’t mean we don’t think.
Page 21

I left my finger on it [the doorbell] — that’s the beauty of being the police, you don’t have to be considerate at five o’clock in the morning.
Page 33

Still, Nightingale would want to know who these people were, and as police you always want to come out of any conversation knowing more about them than they do about you.
Page 84

Obviously not a man to put style before comfort. I approved.
Page 88

This should give you some protection from a fireball while you stage a tactical withdrawal.” By which he meant run like fuck.
Page 114

I like to think I’ve made significant improvements since then, albeit from a low base, and could stop nine out of ten shots. But as Nightingale says, the tenth is the only one that counts.
Page 114

THE MEDIA response to unusual weather is as ritualized and predictable as the stages of grief. First comes denial.
Page 116

I was getting the hang of winter driving, which mostly consisted of not going too fast and putting as much room between yourself and the average driver as humanly possible.
Page 116

I’d done the Middle Passage in year eight at school — I knew slave names when I heard them.
Page 122

Code of the police — you always back your partner in public even when they’ve obviously gone insane — but that didn’t mean you had to be stupid about it.
Page 124

“What do you want?” I asked. Strangely, this made him smile.

“I want to stop running through my life like a man late for an appointment,” he said.
Page 139

THE BRITISH have always been madly overambitious, and from one angle it can seem like bravery, but from another it looks suspiciously like a lack of foresight.
Page 158

My dad says that the Russians have a saying, “A man can get used to hanging if he hangs long enough.” Unfortunately, what is true of hanging is not true of the smell of the London sewers, which are truly indescribable.
Page 184

I shrugged. “What do I know?” I said. I was thinking of making it my family motto.
Page 205

“I’ve had a whole team watching over her since they dug you out of the ground,” he said.

It was a good plan, and like all plans since the dawn of time, this would fail to survive contact with real life.
Page 262

I hadn’t wanted to go down the manhole, but once I’d made myself do it I was all right. It helped that I was surrounded by people I trusted.
Page 262

WHEN YOU’RE police it’s important to always convey the impression that you know more about what’s really going on than any random member of the public. The best way to achieve this is to actually know more about something than people think you do.
Page 267

Classic grooming behavior, Dr. Walid told me later, something our fellow primates indulge in to maintain troop cohesion. Dr. Walid said human beings use language for the same purpose — which is why you find yourself talking total bollocks to people you meet at a bus stop and then wonder what the fuck did I do that for?
Page 272