The Good Daughter« an older post
a newer one »Hope In The Dark
Book Notes kitt decided around 22:52 on 5 July 2018 to publish this: 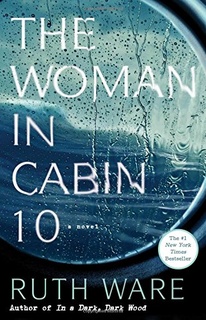 I picked up this book when I was wandering inside the local bookstore. It was on the new releases table, and looked interesting, lots of positive hype, so I bought the book. I read it fairly quickly, so it's not a slow read. It was, however, a frustrating read.

How to explain without giving spoilers?

Okay, this part isn't a spoiler, since it is on the cover of the book, you know what you're getting into with the cover blurb, but let's take note of it. The protagonist has heard a splash in the water outside of her back-of-the-yacht cabin balcony which is close to the engines. She heard the sound after falling asleep shit-faced-drunk (6 known drinks on an empty stomach, more drinks implied), while still asleep and with the boat engines running. Please note that this is a book with "a churning plot worthy of Agatha Christie"? Did Christie have such a gaping plot hole?

Okay, waving off this issue, let's see the protagonist's response.

The second was a realization, and one that made my stomach clench and shift. Whoever had been standing there -- whoever had thrown that body overboard -- could not have missed my stupid headlong dash to the balcony. In all likelihood they'd been standing on the next-door veranda as I dashed onto mine. They would have heard my door crash back. They would probably even have seen my face.
Page 91

Consider that for a moment.

But the last part of the paragraph, the heroine is worried that the alleged perpetrator has seen her face.

How did an editor let this through?

The book has many of these absurdities in it.

Take the home break-in that happens in the first few pages of the book. The heroine's response:

After he'd gone, I made myself a tea and paced the flat. I felt like Delilah after a tomcat broke in through the cat flap and pissed in the hallway -- she had prowled every room for hours, rubbing herself up against bits of furniture, peeing into corners, reclaiming her space.

I didn't go as far as peeing on the bed, but I felt the same sense of space invaded, a nee to reclaim what had been violated. Violated? said a sarcastic little voice in my head. Puh-lease, you drama queen.

But I did feel violated. My little flat felt ruined -- soiled and unsafe.
Page 11-12

OF F---ING COURSE she'd feel violated, HER HOME WAS JUST ROBBED. That is one of the prime examples of violations, having a place of safety invaded.

How is Ware considered the next Christie if she doesn't understand this fundamental nature of human fear and stress? Being violated leads to feelings of having been violated, pretty basic that.

Ho-boy, and then there is this:

But even if I'd had full-blown psychosis, that didn't detract from the fact that, pills or no pills, I saw what I saw.
Page 141

She heard what she heard, and imagined the rest.

Yeah, this book was a rough read for me. The details keep pulling me out, and I'm thinking, "Wait, what?"

Speaking of "What?" Too many of them in recent books I've read. Lo had a number of "What?" questions in the book. "What?" becomes annoying as a speech pattern very quickly.

If you're a fan of Ware's writing, you'll likely enjoy this book. This is the first book that I have read by Ware, so likely the last. I'm not a fan.

"What," I demanded, "you don't believe me? You don't think people can be sucked into doing something out of fear, on inability to see any other way out?"
Page 334