Rita Hayworth and Shawshank Redemption« an older post
a newer one »The Salt Line
Book Notes Yeah, kitt finished writing this at 17:12 on 24 January 2018 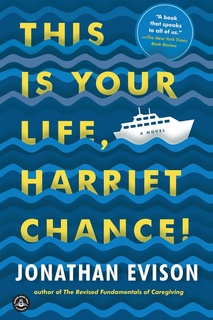 Mom recommended this book to me after I finished A Man Called Ove. What I didn't understand immediately was why Mom kept recommending to me books where the spouse had recently died. Now, I'm pretty sure she's been recommending them to me because they are light, but they also show how there's more after the sorrow of that parting.

This book smacks of Defending Your Life (1991 movie starring Albert Brooks) with its telling of the life of Harriet Chance nee Nathan. The story-line bounces from current time, back to when she was a year old, and all the way through all the times she failed to choose herself during life. We hear of how again, and again, and again, Harriet's deferment to authority and others causes her to become smaller and smaller.

And you know what? It's is hard not to defer to authority. Some people can. Most people cannot.

The book was cute, but I really couldn't get past the Defending Your Life ("NINE DAYS!") feel of it. I kept waiting for the trial at the end, or the movie screens, or an explanation about the Candidate and Chancellor stuff with Bernard. Didn't happen, seemed odd.

I don't recommend this book. If you're a fan of the author, sure. Otherwise, skip it.

Somebody to commiserate with. Somebody you can complain to. Somebody to listen to you without offering advice. How is it that you’ve so rarely managed to achieve this? Why is female fellowship forever so elusive to you? Are you different from other women?
Page 30

Have you released your independence at long last? Have you finally stopped tracking the progress of that other incarnation of yourself, the one who didn’t bow to the expectations of society, the one who didn’t opt for the easy way out, the one who wasn’t going to have children until she was thirty? Or have you simply lowered your standards?
Page 53

Why does it always come to this between her and Caroline? As though they’re out of patience before they’ve even begun. It doesn’t seem to matter how firmly they resolve themselves to diplomacy or civil obligation, after the briefest of exchanges their relationship devolves into this prickly state of nervous exhaustion. They’re forever plagued by the same old pettiness, still stung by the same insults, still harboring the same old resentments.
Page 68

The fruits of self-pity were no less bitter at seventy-eight than they were at sixteen.
Page 68

And when I began to suggest we break off the association, new qualities emerged in my lover: Jealousy. Possessiveness. He became a tyrant with his opinions. He lowered my opinion of myself. And such was my guilt by then that I began to need this, too. It was as if by punishing myself, I could undo everything that came before. The less respect he paid me, the more I needed him to achieve balance. For here was the love I deserved, the love I had earned.
Page 104

You sometimes wish you could ask the other you for advice, or guidance, or clarity, or at the very least a little perspective on the life you’ve muddled so badly. If only that other you could take you by the hand and walk you back through the misbegotten paths of your life—the botched decisions; the cowardly retreats; the circumstances you might have controlled, avoided, or otherwise been spared—to the very beginning, where it all started going wrong. You sometimes wish the other you could tell your story.
Page 112

Be honest, Harriet: you don’t even know why you’re crying in the kitchen. You have zero emotional clarity at this moment. Your emotional self has no borders, no shape, no horizons. You can’t tell rage from sadness, anymore. You’re lost at sea emotionally.
Page 197

And lastly, there’s the truth, plain and shabby as a hobo’s trousers, that you believe yourself to be worthless, though you don’t fully know it yet, at least you haven’t formally acknowledged it.
Page 223

“What if it’s too late?” “There’s always that possibility. But don’t let it stop you from trying.
Page 232

It’s amazing the things we can talk ourselves into when we’re desperate for a result.
Page 276

If we’ve learned one thing digging up all these old bones, dusting them off, and holding them to the light, we’ve learned this: While the days unfold, one after the other, and the numbers all move in one direction, our lives are not linear, Harriet. We are the sum of moments and reflections, actions and decisions, triumphs, failures, and yearnings, all of it held together, inexplicably, miraculously, really, by memory and association.
Page 293