Home » The Rest of the Books I'm Reading
How the Post Office Created America« an older post
a newer one »False Value
Book Notes Yeah, kitt finished writing this at 12:10 on 19 April 2020 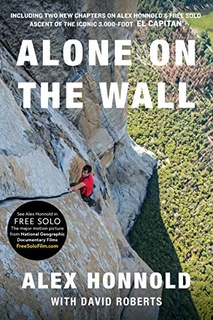 The other day, Kris and I were watching Free Solo, a movie that Mom and Eric STRONGLY recommended I watch after I gushed about my first rock climbing class back in January. In the movie, Alex Honnold is signing books in a bookstore. The book he is signing is this one. So, here we are, reading Alone on the Wall.

The book was a delightful read. It tells much of Alex's story that was told in Free Solo. Similar to when I watched the movie, many times my thoughts were, "Nope. Nope nope nope," with some of the things he does. I am grateful for Alex and his adventures, even if I never meet him. I enjoyed the book a lot, worth reading.

Again and again, whenever he speaks in public, Alex is asked the same two questions by everyone from little kids to graybeards. Indeed, they are the fundamental questions about what he’s doing on rock. They are: Aren’t you afraid you’re going to die? Why do you do this?

In a sense, those questions are unanswerable. They lie in the realm of George Leigh Mallory’s throwaway response in 1923 to the umpteenth journalist who asked him why he wanted to climb Everest: "Because it is there." (Though intended as an irritable jab by a man fed up with the question, Mallory’s quip has become the most famous quotation in mountaineering history.)
Page 8

But then I had to shift from stemming to liebacking. Now I grabbed the edge of the crack with both hands, leaned back to the left, and walked my feet up the opposite wall till the soles of my shoes were only two feet below my lower hand. Liebacking feels somewhat unnatural.
Page 19

It’s bad form to brag about a climb before you do it. And I didn’t want my good buddies to get too alarmed — then I might start worrying about them worrying about me ! I guess I was just trying to reassure them: Hey, guys, I think I can handle this. I’ll be safe.
Page 30

A lot of the Stonemasters, though, were into drugs. Some of them even bragged about doing serious climbs in Yosemite while they were tripping their brains out on LSD. Their style was part of the counterculture movement of the day, but I just couldn’t relate to it. I’ve never done drugs, and though I’ve tasted alcohol, I’ve never had a whole drink. I don’t even drink coffee. I had a small cup once — it was like drinking battery acid. I had to poop all morning. I once had a sniff of Scotch. I thought, I should be cleaning my sink with this stuff. It’s not some moral objection — drugs and booze and caffeine just have no appeal to me.
Page 32

Yeaaaaaaaah, I can understand this.

He was asked, "If you don’t believe in God or an after - life, doesn’t that make this life all the more precious?"

Alex responded: "I suppose so, but just because something is precious doesn’t mean you have to baby it. Just like suburbanites who have a shiny new SUV that they are afraid to dent. What’s the point in having an amazing vehicle if you’re afraid to drive it? " I’m trying to take my vehicle to new and interesting places. And I try my very best not to crash, but at least I take it out."
Page 38

I’ve done a lot of thinking about fear. For me, the crucial question is not how to climb without fear — that’s impossible — but how to deal with it when it creeps into your nerve endings.
Page 42

It’s not necessarily suicidal. It’s about a guy suddenly losing the love of his life, caring a little less about danger, and so finally doing something that he’s always kept tucked in the back of his mind.
Page 73

For example, I can’t tell you how many people over the years have pressured me to drink alcohol. We’ll be at a party, and somebody will taunt me, "Alex, just try this beer, it’s not gonna hurt you to take a sip." I’ve never given in. Booze doesn’t interest me.
Page 105

This delights me so much. I am grateful that the pressure for me to drink alcohol disappeared the first time I said no in college. Thus far, when I drink, it has been of my choice. I am lucky.

Climbing in the dark is quieter and lonelier than in the daylight. In some ways, there’s no exposure. You’re inside this little bubble with your headlamp. A fifteen - foot beam of light is the whole universe. There was no danger I’d get off - route, since I knew the sequences so well by now. And yet, you still sense that there’s this void below you, somewhere in the darkness. It’s like swimming in the ocean and realizing there’s a bottomless abyss below you.
Page 128

That abyss is terrifying when it is in the Southern Ocean, btw.

One of my favorite aspects of soloing is the way that pain ceases to exist.
Page 161

I’ve tried to approach environmentalism the same way I do my climbing: by setting small, concrete goals that build on each other.
Page 164

Logan asks, "Do you get an adreneline rush?"