Apparently, it was critically important—and not at all easy—to keep going after failure:
Page 7

The highly accomplished were paragons of perseverance.
Page 8

Why were the highly accomplished so dogged in their pursuits? For most, there was no realistic expectation of ever catching up to their ambitions. In their own eyes, they were never good enough. They were the opposite of complacent. And yet, in a very real sense, they were satisfied being unsatisfied. Each was chasing something of unparalleled interest and importance, and it was the chase—as much as the capture—that was gratifying. Even if some of the things they had to do were boring, or frustrating, or even painful, they wouldn’t dream of giving up. Their passion was enduring.
Page 8

As any coach or athlete will tell you, consistency of effort over the long run is everything.
Page 50

So, the idea that every waking moment in our lives should be guided by one top-level goal is an idealized extreme that may not be desirable even for the grittiest of us. Still, I would argue that it’s possible to pare down long lists of mid-level and low-level work goals according to how they serve a goal of supreme importance. And I think one top-level professional goal, rather than any other number, is ideal.
Page 66

Passion begins with intrinsically enjoying what you do.
Page 91

Nevertheless, they’re captivated by the endeavor as a whole. With enduring fascination and childlike curiosity, they practically shout out, “I love what I do!”
Page 91

“So why didn’t you quit?” “It’s very simple,” Rowdy said. “It’s because I loved swimming. . . . I had a passion for competing, for the result of training, for the feeling of being in shape, for winning, for traveling, for meeting friends. I hated practice, but I had an overall passion for swimming.”
Page 133

Nobody wants to show you the hours and hours of becoming. They’d rather show the highlight of what they’ve become.
Page 135

Grit depends on a different kind of hope. It rests on the expectation that our own efforts can improve our future. I have a feeling tomorrow will be better is different from I resolve to make tomorrow better. The hope that gritty people have has nothing to do with luck and everything to do with getting up again.
Page 169

In the decade following that 1964 experiment, additional experiments revealed that suffering without control reliably produces symptoms of clinical depression, including changes in appetite and physical activity, sleep problems, and poor concentration.
Page 173

Optimists, Marty soon discovered, are just as likely to encounter bad events as pessimists. Where they diverge is in their explanations: optimists habitually search for temporary and specific causes of their suffering, whereas pessimists assume permanent and pervasive causes are to blame.
Page 174

When you keep searching for ways to change your situation for the better, you stand a chance of finding them. When you stop searching, assuming they can’t be found, you guarantee they won’t.
Page 178

My first suggestion in that regard is to update your beliefs about intelligence and talent.
Page 192

My next suggestion is to practice optimistic self-talk.
Page 193

The point is that you can, in fact, modify your self-talk, and you can learn to not let it interfere with you moving toward your goals. With practice and guidance, you can change the way you think, feel, and, most important, act when the going gets rough.
Page 193

one final suggestion for teaching yourself hope: Ask for a helping hand.
Page 193

“There have been so many times in my career when I wanted to pack it in, when I wanted to give up and do something easier,” Rhonda told me. “But there was always someone who, in one way or another, told me to keep going. I think everyone needs somebody like that. Don’t you?”
Page 196

don’t pass judgment on that parent lecturing their child in the supermarket cereal aisle. In most cases, you don’t have enough context to understand how the child interprets the exchange, and, at the end of the day, it’s the child’s experience that really matters.
Page 213

Bob dubbed this phenomenon learned industriousness. His major conclusion was simply that the association between working hard and reward can be learned. Bob will go further and say that without directly experiencing the connection between effort and reward, animals, whether they’re rats or people, default to laziness. Calorie-burning effort is, after all, something evolution has shaped us to avoid whenever possible.
Page 240 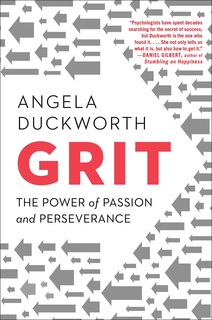