“The uneasiness still troubled him. He had missed something, he did not know what. Well, he was an instinctive man; the mind would tell him sooner or later. Perhaps it was only that when you try to put it into words you cannot express it truly, it never sounds as you dream it. ”
Page 66

“The vision was brutally clear: he had to wonder at the clarity of it. Few things in a soldier’s life were so clear as this, so black-line etched that he could actually see the blue troops for one long bloody moment, going up the long slope to the stony top as if it were already done and a memory already, an odd, set, stony quality to it, as if tomorrow had occurred and there was nothing you could do about it, the way you sometimes feel before a foolish attack, knowing it will fail but you cannot stop it or even run away but must even take part and help it fail. But never this clearly. There was always some hope. Never this detail. But if we withdraw—there is no good ground south of here. This is the place to fight.”
Page 77

“Buford did not hate. He was a professional. The only ones who even irritated him were the cavaliers, the high-bred, feathery, courtly ones who spoke like Englishmen and treated a man like dirt. But they were mostly damn fools, not men enough to hate.”
Page 85

“Longstreet sat with his back against a tree, waiting. His fame as a poker player was legendary but he had not played in a long time, not since the deaths of his children, and he did not feel like it now; but he liked to sit in the darkness and watch, passing the time silently, a small distance away, a member of it all warmed by the fire but still not involved in it, not having to talk.”
Page 92

“here had long been talk of England coming in on the side of the South. But Longstreet did not think they would come. They will come when we don’t need them, like the bank offering money when you’re no longer in debt.”
Page 98

“Pickett was always saying something to irritate somebody, and he rarely knew why, so his method was simply to apologize in general from time to time and to let people know he meant well and then shove off and hope for the best. He apologized and departed, curls a jiggle.”
Page 106

“He smiled: a touch of shyness. He was five years older than Longstreet, and now he was the junior officer, but he was one of the rare ones who were genuinely glad to see another man advance”
Page 109

“He was an honest man, open as the sunrise, cut from the same pattern as Lee: old family, Virginia gentleman, man of honor, man of duty. He was one of the men who would hold ground if it could be held; he would die for a word. He was a man to depend on, and there was this truth about war: it taught you the men you could depend on.”
Page 109

“Lee put his hand to his eyes. He was fuzzy-brained. Longstreet loved the defense. But all the bright theories so rarely worked.”
Page 135

“Then he said slowly, “That move will be what Meade expects.”
“Yes. Because he fears it.”
Page 135

“Hill was a nervous, volatile, brilliant man. He had been a superb division commander, but now he commanded a corps, and it was a brutal military truth that there were men who were marvelous with a regiment but could not handle a brigade, and men who were superb with a division but incapable of leading a corps. No way of predicting it. One could only have faith in character.”
Page 156

“True,” Longstreet said. He was weary of talk. “Honor,” he said. “Honor without intelligence is a disaster. Honor could lose the war.”
Fremantle was vaguely shocked.
“Sir?”
“Listen. Let me tell you something. I appreciate honor and bravery and courage. Before God … but the point of the war is not to show how brave you are and how you can die in a manly fashion, face to the enemy. God knows it’s easy to die. Anybody can die.”
Page 201

“In the old days they fought from a distance with bows and arrows and ran at each other, man to man, with swords. But now, listen, now it’s quite a bit different, and quite a few people don’t seem to know that yet. But we’re learning. Look. Right now, take a man with a good rifle, a good man with a good rifle which has a good range and may even be a repeater. He can kill at, oh, conservatively, two, three hundred yards shooting into the crowd attacking him. Forget the cannon. Just put one man behind a tree. You can hardly see him from two hundred yards away, but he can see you. And shoot. And shoot again. How many men do you think it will take to get to that man behind a tree, in a ditch, defended by cannon, if you have to cross an open field to get him? How many men? Well, I’ve figured it. At least three. And he’ll kill at least two. The way you do it is this: one man fires while one man is moving, and the other is loading and getting ready to move. That’s how the three[…]”
Page 201

“And then Lee thought: But sometimes I have seen it happen. A man loses part of himself, an arm, a leg, and though he has been a fine soldier he is never quite the same again; he has lost nothing else visible, but there is a certain softness in the man thereafter, a slowness, a caution. I did not expect it with Ewell. I do not understand it. Very little of a man is in a hand or a leg. A man is in his spirit and he has that in full no matter what part of his body dies, or all of it. But, Lee thought, you may not understand. It has not happened to you, so you don’t understand. So don’t judge. He was a good soldier. ”
Page 214

“Now when he closed his eyes she was suddenly there, hot candy presence. Away from her, you loved her more. The only need was her; she the only vacancy in the steamy morning. He remembered her letter, the misspelled words: “I lie here dreamyly.” Even the misspelling is lovely.”
Page 248

“We all thought they was crazy, but we hadn’t heard a-right. They kept on insistin’ they wasn’t fightin’ for no slaves, they were fightin’ for their ‘rats.’ It finally dawned on me that what the feller meant was their ‘rights,’ only, the way they talk, it came out ‘rats.’ Hee. Then after that I asked this fella what rights he had that we were offendin’, and he said, well, he didn’t know, but he must have some rights he didn’t know nothin’ about. Now, aint that something?”
Page 248

“Hour of decision, enemy on soil. When he came to the part about men who failed to do their duty being punished by instant death, it embarrassed him. The men looked up at him with empty faces. Chamberlain read the order and added nothing, went off by himself to sit down. Damn fool order. Mind of West Point at work.
No time to threaten a man. Not now. Men cannot be threatened into the kind of fight they will have to put up to win. They will have to be led. By you, Joshuway, by you. Well. Let’s get on with it.”
Page 254

“Well, if you mean the race, well, I don’t really know.” He hunched his shoulders. “I have reservations, I will admit. As many a man does. As you well know. This is not a thing to be ashamed of. But the thing is, you cannot judge a race. Any man who judges by the group is a peawit. You take men one at a time, and I’ve seen a few blacks that earned my respect. ”
Page 256

“Chamberlain said slowly, “I don’t really understand it. Never have. The more I think on it the more it horrifies me. How can they look in the eyes of a man and make a slave of him and then quote the Bible?”
Page 257

“But then he pointed out that he could not apologize for his views, because they were honestly held. And I had to see he was right there. Then he talked to me for a while, and he was trying to get through to me, just as I had tried with the minister. The difference was that this was a brilliant man. He explained that the minister was a moral man, kind to his children, and that the minister believed every word he said, just as I did, and then he said, ‘My young friend, what if it is you who are wrong?’ I had one of those moments when you feel that if the rest of the world is right, then you yourself have gone mad. Because I was really thinking of killing him, wiping him off the earth, and it was then I realized for the first time that if it was necessary to kill them, then I would kill them, and something at the time said: You cannot be utterly right. And there is still something every now and then which says, ‘Yes, but what if you are wrong?’ ” Chamberlain stopped.”
Page 257

“Longstreet turned to see his face. Lee was riding slowly ahead, without expression. He spoke in that same slow voice.
“To be a good soldier you must love the army. But to be a good officer you must be willing to order the death of the thing you love. That is … a very hard thing to do. No other profession requires it. That is one reason why there are so very few good officers. Although there are many good men.”
Lee rarely lectured. Longstreet sensed a message beyond it. He waited. Lee said, “We don’t fear our own deaths, you and I.” He smiled slightly, then glanced away. “We protect ourselves out of military necessity, not fear. You, sir, do not protect yourself enough and must give thought to it. I need you. But the point is, we are not afraid to die. We are prepared for our own deaths and for the deaths of comrades. We learn that at the Point. But I have seen this happen: We are not prepared for as many deaths as we have to face, inevitably as the war goes on. There comes a time …”
Page 277

“We are never prepared for so many to die. Do you understand? No one is. We expect some chosen few. We expect an occasional empty chair, a toast to dear departed comrades. Victory celebrations for most of us, a hallowed death for a few. But the war goes on. And the men die. The price gets ever higher. Some officers … can pay no longer. We are prepared to lose some of us.” He paused again. “But never all of us. Surely not all of us.”
Page 278

“Longstreet rode, listening to Sellars, thinking: when you study war it’s all so clear. Everybody knows all the movements. General So and So should have done such and such. God knows we all try. We none of us lose battles on purpose. But now on this field what can we do that’s undone?”
Page 290

“He shook his head, opened his eyes. Professor’s mind. But he thought of Aristotle: pity and terror. So this is tragedy. Yes. He nodded. In the presence of real tragedy you feel neither pain nor joy nor hatred, only a sense of enormous space and time suspended, the great doors open to black eternity, the rising across the terrible field of that last enormous, unanswerable question.”
Page 477 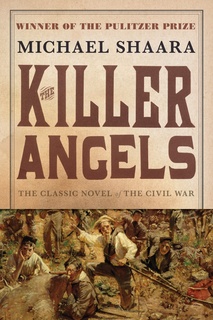