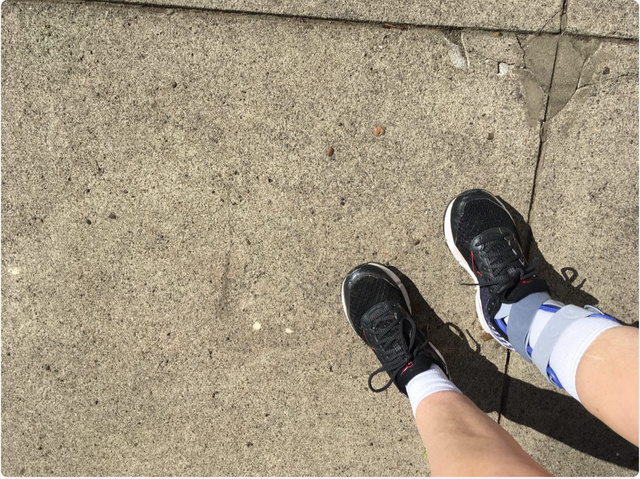 I went for a run today. It was the first run I've done since I sprained my ankle, and was a test run to see how my rehab is going.

I wanted to run from my place up to the gardens then back, but I knew that would definitely be too much. So, I chose a run uphill to the "bottom" of the gardens hill (read: where the buildings end and the forests begin), and back. I figured the run would take me about fifteen minutes including stops, be uphill out and downhill back. I was pretty good about the time estimate.

After the run, I did my normal rehab: alphabets, presses, balancing.

When practicing at Cherry Chase a few weeks ago, Tyler rolled his ankle. Rather than taking care of it like any normal person would do, he continued to play on it, and the following weekend, injured it again, as well as the other ankle.

Fine. Well and good, it's his ankle, whatever.

Except last weekend, he played on it AGAIN, in a tournament, and he, what do you know? When you don't rehab an ankle, and you don't even freaking wrap the injured ankle, you injure it again. Is this surprising to anyone but Tyler? Injury + no care = WORSE injury.

I've had some bad ankle sprains. Any idea how sucky it is to sprain your ankle playing at a park, start limping home and twist your good ankle in a hole, spraining that one, too? Well, I have a good idea what it's like, and that's the on-going story of my ankle injuries. I get them, I rehab from them, I keep playing.

So, a few days after the tournament, I checked in with Tyler. Had he started his rehab? Was he elevating his foot? Was the ankle always in compression? Was he icing regularly? Did he need any rehab exercises?

I gave him some easy ones, like write the alphabet with your foot as big as you can keeping the knee stationary, using only the ankle joint. Do this once an hour. I also offered gentle resistance exercises with a band. Paul offered standing on one foot, building up to a minute, then doing it with eyes closed. All three brilliant suggestions.

Come practice today, had he done any of them? "I wrote the alphabet twice."

When I commented very loudly that no one on the team should enable Tyler's retardness further by throwing with him, he became all pissy about it. Honestly, if a player is going to be retarded, it's the team's responsibility to educate him. If he wants to run after discs on an injured ankle, it's the team's responsibility not to throw to him. If he can't take care of himself, and it's very obvious he can't, the team needs to step up and do it for him. That's pretty much why a team exists: to work together to a common goal.

Our goal should be, "Stop being retarded."

Three months down the drain

I forgot to bring my ankle brace to the evening workout today. During the warmups, we ran some "mountain climbers" and some strange plank, jump to crouch position, back to plank exercise.

My ankle popped on the first landing on my left foot.

Popped, and lost all strength.

Three months of exercising and rehab lost in one loud POP.