So, while Jackson and I were throwing (but not up), Annie and Bella were wandering around the fields. I was keeping an eye on the two dogs are we were tossing, and eventually needed to go fetch Annie who had run far enough away from the two of us that I was uncomfortable. I convinced Jackson to huck the disc as far as he could in Annie's general direction, while I chased it down. I would then throw the disc short for him to run on to. in this way, we moved closer to Annie while still throwing. 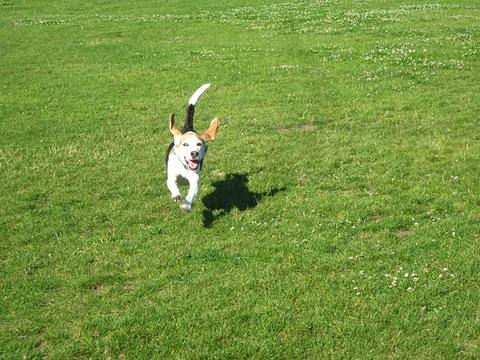 Annie was a good girl, to my surprise, and stopped when I approached her.

She never does that.

Yesterday, as I was walking around the couch to head into the kitchen to feed the dogs (wow, they had waited until 5:15 before sitting in front of me and staring at me, attempting their jedi-mind tricks - I'm on to them by this point, and know how to ignore them... somewhat), Annie leapt from the back of the couch towards the kitchen. She does this all the time. That she did so this evening was nothing out of the ordinary.

And in the stopping did I commit to my doom.

Annie leapt straight into me.

In particular, straight into my left leg, which was firmly positioned on the ground.

Seriously, of all the various scenarios I imagined of how I could and might tear my ACL, I have to say that leaping beagle was not on my list.

Took out the stitches

Her ear looks good, as good as an ear that's been ripped apart by a pit bull can look, that is.

You know, when they're quiet, they really CAN be cute.

Annie did a crap job

Annie is not the awesome hunter she claims to be. I mean, just look at her here. Bug right there, RIGHT there, in front of her nose. Does she kill it? Not even with "KILL! KILL!" commands.

Dog? That was lame.

The knee made it!

Bella, Kris, Annie and I went up to Fremont Older today.

Kris was going to spend the whole day, starting at 11:00 AM, playing World of Warcraft. I negotiated a hike and time spent with me in return for not complaining about his playing. In reality, I'm completely annoyed that he plays that game all the f--king time. I despise the inherent lack of a productive life that game, and all the other games he's been addicted to in the last 10 years, creates.

I had originally intended on wearing my knee brace for the hike. When I put it on this morning, however, the brace caused my knee to hurt. Okay, not what I was hoping for. I thought about taping my knee, but decided against that, too, mostly out of laziness, partially out of a lack of belief the taping was actually helping.

So, off we went: Bella in her cone and beat up face, I without a knee brace, Annie and Kris with no issues we knew about.

The hike went smoothly. I ran some of the hills, just to get my legs moving and a faster rate than my usual walking. I had a hard time on several of the hills, with a heavy heart and gasping lungs. It's pretty clear that I haven't been exercising aerobicly for a short while now, a fact I intend to change. I figure, I can run around the block (a half mile loop) four times for a easy 2 mile run. I'll never be more than 200 yards from home, should my knee lock up or I need to go to the bathroom.

As well as my knee did on the hike, Bella didn't do so well. We kept her in the cone, since she immediately started scratching her face when we removed the cone. I don't know if the cone was an additional burden or not, but she ended up not moving at one point, so Kris carried her the rest of the way back to the car.

I think she might be getting old. We already know she's deaf.

Annie and the chickens

We went over to Andy's last night to drop off his bike pump from our WildFlower trip, a Rock Band set that Chris picked up from work as a freebie, and bring over dinner. Since Andy is heading off to Europe for a business trip tomorrow (his assistant staying at his house for an extended stay, with the dogs, of course), we wanted to say "Safe Travels!" before he dashed off. Bringing over dinner and leaving early were part of the help-Andy-streamline-his-evening plan.

I hadn't realized just how unexposed our dogs are to chickens, until standing in Andy's living room, one went flying by me, Annie in hot pursuit. I reached down for her as she passed, missed, and ended up having to layout for her to stop her from chasing the chicken.

Heh. Chase the chicken. They're really easier to catch than Gino was.

I ended up leashing Annie to the couch so that she could see the chickens the whole time and DO NOTHING ABOUT THEM.

Bella just stalked them. With that damn cone.

Andy showed off his Hall of Fame trophy from the UCSB Athletics program.

Bella and Annie now have their own Twitter streams! Find out what they're doing at Bella and annie the beagle.

I can't believe how hard it was to find open twitter names for the two of them.

Sure, I mean, yeah, I expected the names "bella" and "annie" to be taken. Variations for Bella I tried included

Bella Cross is the name of the whiskey Kris and I plan to produce. If figure the end of the dog's lifespace and the start of the whiskey enterprise will most likely coincide, in about 2 or so years, so we'll switch away from a dog twitter stream to a whiskey twitter stream some time around then.

Annie's name was horribly hard to find one for, too.

I eventually gave up and used doggen as the suffix for her name. Kris and I use doggen as the plural of dog when referring to our dogs, so the name doesn't quite work, but sorta does.

So, Bella is "bellacross" on twitter, and Annie is "anniedoggen."

Go on, go follow them now. Yes, that might mean you need to create a twitter account. Heaven forbid I should actually know what's going on in your life. While you're at it, follow me before I degenerate into a black 1982 Pontiac Trans-am, or a 2008 Ford Shelby Mustang. Really.