The Curse of Bigness 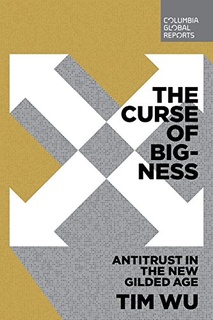 I did not know what this book was about when I started reading it, which could have been why it was as powerful to me. I hope that commenting on it does not lessen its power when you read this book, because I STRONGLY recommend this book, and will buy you a copy if you'll read it.

Consider the U.S. Government and the Constitution which dictates how it interacts, grows, and is stopped. It has its checks and balances with its power, and, for the most part, can keep itself reined in (no, not really, but as far as governments go, its the worse we have expect for all others).

What the Founding Fathers did not anticipate in the Constitution was that the government would not be the most powerful entity in the country.

Lo and behold, our times.

The U.S. Government is not the most powerful organization in the country, and such status is causing problems.

The anti-trust (nee anti-monopoly) legislation of yore, the stuff that might have been covered in U.S. History class if you took a twentieth century history class, was the government's attempt to rein in the private power that was threatening to dethrone the U.S. Government. Said legislation works only if it is enforced, and since the Bush Jr Era (quelle surprise), it has not been.

This book is a history of the anti-trust work, its origins, its failings, and its hope.

I strongly recommend everyone to read it. Wu has done a great job of explaining the problem, providing solutions, and giving hope, in as much as one can have in a surveillance capitalistic world.