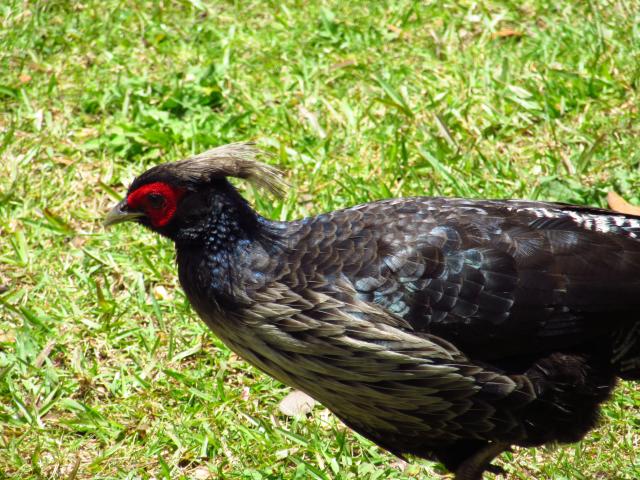 While hanging out near the volcano on Hawaii, Mom and I went to the Art Center near the park's Visitor's Center. While walking from the Art Center to the parking lot, we went through a picnic area, where we ran into a male Kalij pheasant courting a female Kalij pheasant. It was interesting to watch, the movements of the birds, how they reacted to us, and when they decided to avoid us.

It was. And then it wasn't.

This morning, as Kris and I were getting ready to walken the doggen, I heard a loud THUMP as I walked into the kitchen from the living room. Kris commented immediately after the sound, "Oh, he don't feel too good," a comment we make as we kill spiders and flies, or when something bad happens to some animal on the discovery channel.

We have these lovely large windows in the living room. every once in a while, a bird flies into them. The windows haven't shattered, but I wonder sometimes when they will. The thumps from some of these birds is amazingly loud.

I wandered back into the living room and looked for my camera. When birds hit the window, they often leave a interesting splat marks on the window. I find them amusing, and figured there would be one to view.

When I looked up from grabbing my camera, I saw a bird hopping around outside, as I looked out the window through the gap between the table and treadmill. It would jump and flutter, or prance and shake its head. It kept moving around as if dazed. I smiled at the bird trying to shake off its thump against the window, and stepped forward to take a picture.

To see the other bird lying on the ground next to it.

The first bird kept jumping around the second bird lying on the ground. As I watched, the bird who had hit the window and was just lying there, started twitching. One of its legs stuck out straight then started vibrating.

I set the camera aside, suddenly not really interested in taking pictures of the tragedy I was watching. The first very-much-alive bird started nudging the second not-so-much-alive bird. It would bounce in, nudge, jump away, lift its wings and chirp, stand still, then repeat the process. It was heart wrenching to watch the bird not understand its loss.

I went outside and watched the first bird fly away, and went up to the second bird lying on the ground. As I crouched down next to it, I looked closely and saw no movement. I managed to sit there for about ten seconds before my nose triggered red, and the tears started coming down.

I stood up, walked into the kitchen, Kris watching me puzzled. I grabbed a dog poop bag, walked back outside, and picked up the bird.

It was warm. It was light, so very light. I was worried I was going to crush it, it was so light. A silly worry, to be sure, the bird was dead, I wasn't going to hurt it any more than I would be hurting a branch.

Holding it, looking at it, realizing that the bird was, then suddenly just wasn't, was overwhelming.

I started crying with the sobs of loss, as all the hurt and pain and frustration I'd been holding in for the last few months just came gushing out. I sat down and sobbed at the loss. I cried and cried and cried. When rational thought at how silly I might be at that moment intruded, I cried even harder that I would care how silly I looked in that moment. I cried at how something can be, then just not be a moment later, and the rest of the world goes on. I cried at the thought that at some point in the thinkable future, I will not be, and I can't say I've done anything amazing yet.

Kris stood in the house, probably completely confused. It was just a small little bird who flew into the window, what the heck is wrong with this woman?

Still sobbing, I stood, took a couple pictures of the bird. Bella came rushing up, mouth open to bite the bird, reminding me that we were going to walk the dogs. Kris and the dogs were ready to go, so I bundled up and walked out the door, crying the whole time.

Walking has a meditative quality, which helped me calm down by the end of the block, so at least I wasn't sobbing. I took pictures of flowers on the walk to help console me somewhat. Between the walking and taking pictures of bright colors, I was feeling somewhat better, but still very sad.