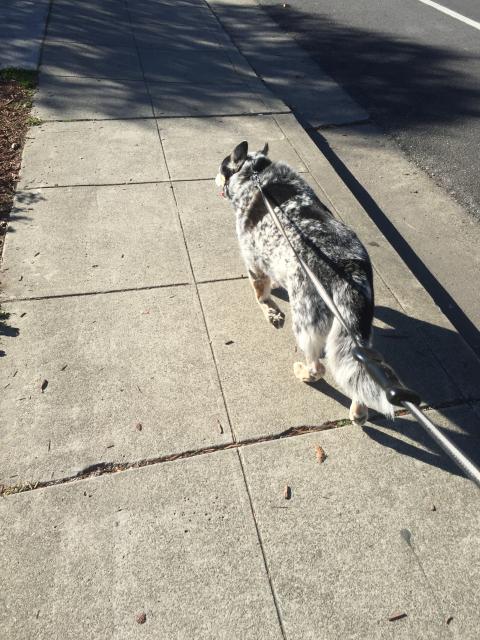 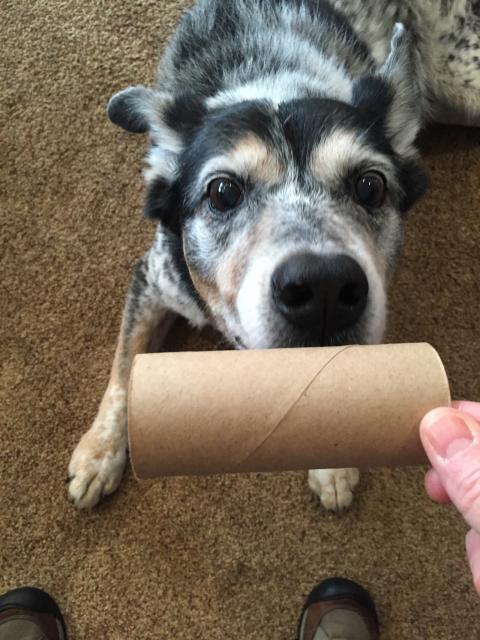 He is a weird dog.

That would be "Blue Ball Balancing." 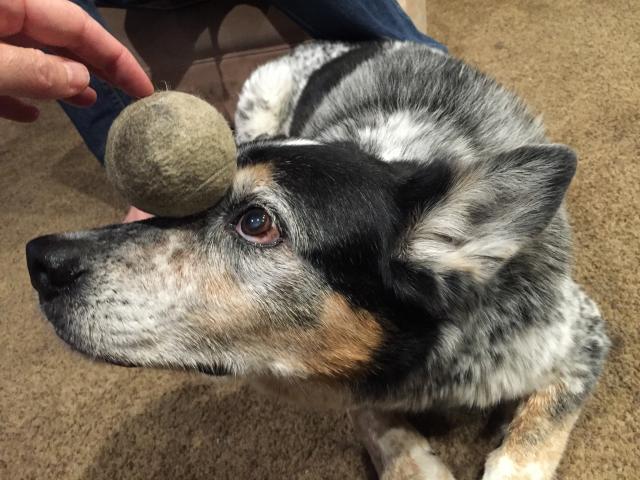 Kris and I managed to sleep most of the night through last night, with Kris' waking to the smell of Andy's coffee and my waking to the thud of an excited Blue landing on top of me, bringing the tent down in the process.

Nothing like using a sixty pound dog as wake up call.

That same dog makes a great escort in the middle of the night when there might be coyotes and other large animals roaming around, and you're not sure if it's safe to walk around the small building, across a small open space to the other side of the hilltop, in order to pee.

Andy thinks that Blue didn't actually sleep last night, that he maintained watch the whole night. I know that Annie wriggled her way out of the tent in order to sit watch for a while. She did, however, recognize the warmth of the tent, and wormed her way back into the tent, sitting on Kris' head in the process.

This morning, I was, unsurprisingly, the last person up, with Bella being the last of the seven of us actually getting up.

After breakfast, a meal that Bella thought meant, "We're going home!" but really meant, we're heading off for another hike. Having climbed to the top of the hill he'd been wanting to climb, and discovering another hill beyond it, he decided he wanted to climb THAT hill to see if there was another hill beyond it.

Interestingly enough, I think all of the dogs have decided that I am the source of all that is good. That is to say, food.

So, off we went on our hike, pretty much following the same trail that Kris and Andy (and Blue and Shadow and Annie and mostly Bella) took yesterday. The six of us (where the six of us were the seven of us minus Bella, who was, once again, on her own hike again) went out the back way, down the hill, up the next one, and along the ridge. Up and over a couple hills, to the top of one hill, to discover the next range of hills after that range.

For the way back, we decided not to go back the same way we came up, and opted instead to hike back "towards the water tower." We found a copse of pine trees, though how they survived, much less grew so big, on the top of the hill with little water, I have no idea.

At one point, I stopped to squat, and Bella passed me, to catch up with Kris and Andy. Kris decided to wait for me, Andy decided to continue. At that point, we lost Andy. He went off either down toward a large ravine or down towards a dropoff of unknown height. We decided to try to the left, towards the large ravine.

After a few hundred meters, Kris was less confident about the direction we were going, so decided to turn around. Bella was in front of us when we made this decision, being the only dog with us. I hurried up to her, turned her around, and hustled her back the way we had come.

We had walked just far enough for Bella to disappear over the hill we were scrambling up when we heard Andy call out to us, why were we walking back the wrong way? Eh?

We called for Bella to come back, but, being on her own hike, she just kept going. We turned back back around, headed back to the ravine, scrambled up and around around the ravine, and waited.

Must to my pleasant surprise, Bella figured out our mistake, had turned around, and was coming back our way. She didn't seem too pleased about our mistake, deciding not to greet us when she caught up to use, and just walked right by.

We wandered down to the bottom of Crews Hill, walked up Crews Road to the top of the hill, and gathered up our stuff. The dogs were sufficiently tired out to sleep all the way back home.

One I'd been talking about for the previous day, to Andy's consternation, I think.

The shoulder that would not heal

Kris, Andy, Blue, Shadow, Annie, Bella and I went to a local school today for some exercise. Kris mostly walked around, arms stuck at his side, unable to lift them because of last Friday's workout. Andy and I ran around, played on the playground/jungle gym/obstacle course, trying to climb various poles, conquer different bars, shimmy up different structures. Kris, he watched.

As we were walking back to the cars, a process which always takes about ten times as long as you think it should, what with all the smells to smell and trees to claw, discs to chase and dogs to run over. Somehow, I was in front of Andy, and Kris, and Annie, and Shadow, and Blue. Bella was in front of me, keeping her distance from Blue, who, early in the walk, had run her over chasing a disc.

She's the smart one.

So, I turned back to say something to Kris, as Andy released a disc for Blue to catch. The throw was a beautiful low throw, a perfect throw for an easy catch, actually. As I noticed the throw, my thoughts were something like, "That's a nice throw." "Hey, I could catch that throw." "Oh, a dog."

Blue ran right through my knees on his way to the disc. Sure, he was still accelerating. Sure, he wasn't at top speed. Sure, my pivot point is about hip level.

We discovered this when I did, indeed, pivot at hip level to horizontal, then, as in a Road Runner cartoon, dropped straight down.

I landed on my shoulder, hip and knees, searing pain shooting up my shoulder, which has been semi-injured since late October of last year, and only started healing earlier this month when I started taking mega (MEGA) doses of ibubrofen at my doctor's orders.

I landed with a THUMP. I started crying.

Now, crying in pain is an okay response. It happens. When pain is sudden and severe, hey, crying is a natural response.

Except that from a distance, crying sounds a lot like laughing. Which is what Andy and Kris were doing.

Eventually, they wandered over to me and asked if I was okay. I said my shoulder hurt a lot. When Kris asked how much, I realized that I couldn't answer, because it didn't hurt much on Kris' pain scale (where he'll be moaning in pain at the top of his lungs, but when asked where it is on a scale from 1-10, he'll say 4), so I stopped moaning and got up.

Although I'm annoyed my shoulder hurts again, I think the worst part was the fact I cried in front of Andy. I'm so mad at myself. Pain on a physical scale? 2. Pain on an embarrassment scale? 10. Argh.

Okay, so, there were other parts of today's hike that weren't about Blue (no, really!).

Andy shows me that we're here! Yay, the beach!

We found a really big tire on the beach:

Bella was very puppy-dog on the beach, with her ears flapping in the wind:

Annie found a dead seal on the beach, and showed it to me just before she rolled all over it.

Andy IM'd this morning and asked if we were interested in taking the dogs to the park. Go outside and play? Uh, yes? Kris had plans at noon, so wanted only to go to the local park. We went off to the park, three people, four dogs in tow.

I expected each dog to do his usual thing: Bella would sniff everything along the perimeter; Annie would run run run, then sniff along the perimeter, waiting for a lapse in our awareness to make her escape; Blue would chase the disc as long as Andy threw it; and Shadow would alternate between playing defense on Blue and hovering near one of the people for a quick snuggle.

To my surprise, Bella came out to play with us, chasing one of us when someone was running around, and dodging us when one of us was chasing her. She artfully zipped among the three of us, swerving in and out, juking one way and dashing the other when we made to cut her off. Bella pretended to be a 2 year old dog, and endeared her little heart to us.

Shadow also surprised me by chasing me down, nipping at my legs and herding me back to the pack when I tried to run down Annie, who had "wandered" away. When I turned on him and started chasing him, Andy and Kris joined in, turning the herder into the herdee.

When we were done, Andy asked if I was interested in heading to Ft. Funston, confuse the dogs by giving them not one, but TWO outings. I was up for it, so off we went. Although the trip was billed as a "fool the dogs and go on a hike," in reality it was, "display how inaccurate Kitt's timing is with her new camera."

A distant shot of Blue:

A close shot of Blue:

Blue chasing birds in the surf:

Way after a catch:

Just a little after the catch:

Waaaaaay before the catch to compensate:

And so far before the catch, Blue was still spinning:

But, you know, you take enough pictures, ONE of them is bound to be good, right?

Of course, there's the shot of Andy, to prove he was there, too:

Of my dogs, well, I have a lot of pictures of their butts:

Any idea how hard it is to make a Blue Heeler sit still long enough to shove a camera up his nose? How about a Border Collie?

How about after you've already annoyed them with a flash that accidently went off?

Somehow (who knows how!), we convinced Andy that he should let us dog sit his two dogs. Andy's dad dropped the dogs off this afternoon, so Blue and Shadow were in the house when I arrived home from work.

Looking in, I realized why Bella didn't come rushing outside. Blue was nose to the door. Shadow was right behind him. Annie was nowhere to be found. Bella, however, was perched up on top of the couch at the highest, softest, most easily dog-approachable spot in the livingroom, surveying her minions.

A quick rap on the window, a quick turn to the side, and an EXPLOSION of dog fur, and warm doggie breath greeted me in the form of Blue, who nearly knocked me over, and Shadow who finished the job Blue failed at.

Ah, yes, these next few days are going to be fun.