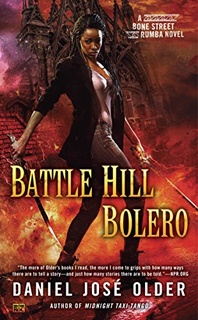 This is the third (and last at the time of my reading) book of the "A Bone Street Rumba" series. I picked up all three books in the series at once, figuring even if I didn't thoroughly enjoy the series, at least I would have something to listen to on the drive back from Denver. The audio books were recommended to me, and I continue the recommendation: Older's reading is fantastic, which is unusual for most authors, tbh. If you enjoy audiobooks, Battle Hill Bolero is a good choice.

This book continues the end of the previous book, where the cockroach creepers are still around, there are still ghosts being turned into assassins, and the Council still sucks a large amount. Several of the ghosts can see more than a little bit of the writing on the wall (that is to say, Mama Esther), which means we read a number of delightful foreshadowings. We also learn of Carlos' and Sasha's past, their lives, their deaths, and Sasha's previous life husband who is more than a little bit creepy.

The whole book culminates in a Battle of the Good Guys vs the Bad Guys™, where, you know, the good guys win. The corrupt Council is routed, despite incredibly superior numbers, but you can't ever forget the bumbling hero, nor the competent hero, nor even the big-hearted hero, especially when they are some of the main characters.

"I had a meeting to attend. Two in fact. I hate meetings. Meetings are Satan's way of balancing out all the beautiful things in the world, like music."
Page: 71 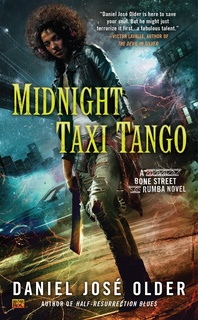 This is the second book of the "A Bone Street Rumba" series. I picked up all three books in the series at once, figuring even if I didn't thoroughly enjoy the series, at least I would have something to listen to on the drive back from Denver. The audio books were recommended to me, and I continue the recommendation: Older's reading is fantastic (which is unusual for most authors, tbh). This book had some incredibly jarring lyric reading by Older's child. I wasn't a fan of that part of the audiobook.

The book starts out with a little bit of Kia's story, filling in some heartache where she and her cousin investigate the weird things happening at a love interest of the cousin: a bunch of ghoulish men are creeping around the kid's house. Well, the ghoulish men decide to attack on the night Kia and her cousin are watching. Kia and Gio become involved in the mayhem, and survive. Gio later disappears, and Kia misses him desperately.

Thus starts a strange loop in Kia's life as small details of her life wraps back upon her: she's attacked by a ghost in a park, which is weird, her cousin returns, which is great, she gains the sight, which just is. and the bad guys escape. Which is to say, the weird ghost in the front yard is part of the climax, Gio is not Gregorio, Caitlin is a bad guy, and the idea of pink roaches is just gross.

I enjoyed the book as much as the first one, and agree they are worth reading for the entertainment.

I find new life in each moment like this: the midnight brownstones breezing past me, the siren song of something foul dragging me forward. This is life, and really, anything is better than the sheer emptiness of so many lost memories.
Page 39 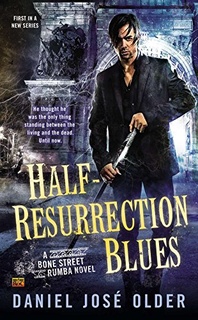 This is the first book of the "A Bone Street Rumba" series. I picked up the book after a second recommendation for it, one from Claire and one from the XOXO slack. One of the strong recommendations from both was, "listen to this book." The book is read by the author, whose voice caresses the listener as it takes the listener on a wild ride.

So, I listened to this book more than I read it. The audio version recommendation? Totally worth it.

In this book, we are introduced to Carlos Delacruz, an in-betweener who is half-alive, half-dead. He worked as an agent for the New York Council of the Dead, a vague power group who directs its people to reap souls to keep the dead in the underworld, and the living out of the underworld. We learn about Carlos as he vaguely recalls things. He doesn't recall his life before his resurrection. He follows the rules of the Council. He leads the dead back to the underworld, or reaps their soul for the second death or some such.

At the beginning of the tale, Carlos meets up with another inbetweener, wait what, there are others? and kills him, per the order of the Council. Turns out, on his dying breath, the guy Carlos kills asks Carlos to watch over his sister, Sasha. Another wait what? She is also an inbetweener. And apparently very very hot. Of course they hook up. But what is this pull and what are all these ngks? Well, the ngks are tiny, exercise bike riding spirits with a hive mind contracted to kill an old spirit in order to open the entrance between the Underworld and the real world. They're kinda mean, too.

So, Carlos uncovers his past, Sasha's past, what the ngks are, who is orchestrating the opening of the Underworld, and just how meh the Council is. The book is a fun read, worth reading / listening to.