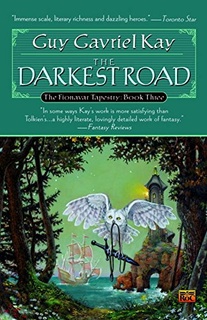 This is book three of the Fionavar Tapestry. You really need to read the first two books in the series for this book to make any sense. That said, the three books are, even two decades after I read them the first time, still amazing.

I lost all my notes I had taken with this reading when my phone died. This loss saddens me a bit, but I'm sure I'll be able to rewrite this review within the next couple years, as I'll read the series again.

That said, this book is about trust. Except, you don't know it's about trust until you sit with the memory of the book, after you're done reading it. Kay's work does that: he doesn't tell you, he shows you. This style is why I love his writing so much.

I strongly recommend this series. I'll buy you a copy if you'd like.

[H]e was acutely aware that she was right—aware of how much his difficulties were caused by his own overdeveloped need for controlling things. Particularly himself.
Location 4910

“Would it have been so terrible,” Kim asked, not wisely, but she couldn’t hold the question back, “if you had just told him you loved him?”

Jennifer didn’t flinch, nor did she flare into anger again. “I did,” she said mildly, a hint of surprise in her voice. “I did let him know. Surely you can see that. I left him free to make his choice. I ... trusted him.”
Location 4979 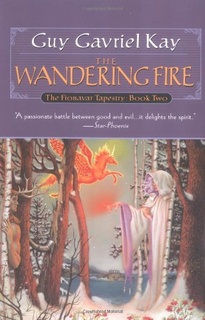 This is book two of the FIonavar Tapestry.

As with the first book, I bought and read the book for the first time in high school. Each time I read this book, this series, I pull a different lesson and a different focus from the book. I do not love these books any less each reading.

I had a number of notes with this latest reading, but I lost them when my phone locked and I couldn't recover the data. I recall this book has a lot more adventure in it than the previous book, more hand-wringing, and more difficult to read parts. I still love and appreciate how Kay doesn't hit the reader over the head with explanations and elaborations. He leaves parts unsaid, he lets the reader feel the losses, he gives us space to grieve, to be surprised, to puzzle, and to accept. It's this style of writing that draws me to Kay's writing again and again.

When I started reading this series again, I was worried that the magic of the books was worn with time. I was wrong. They are still incredible. I strongly recommend this series. 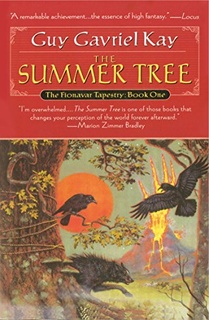 I bought and read this book the first time when I was still in high school. I was working at the bookstore (gosh, that was the perfect job for me), when a woman came in and ordered the three books in this series in hardback form. Who buys books in hardback when they are available in paperback? The woman was, in retrospect, the epitome of a middle-aged science fiction fantasy reader, including the round and smiling parts.

When I placed her order, I ordered a second set of hardbound books for myself. I would argue one of my best book buying decisions ever.

This early Kay work has the perfect writing style, where he shows the reader instead of telling the reader. Some of his later works have lost this magic, though his last book recaptures some of that magic.

The last time I started to reread this book was on the road trip with Chris, so it's been a while. Reading it this time, however, was like slipping into a warm bath of comfort, like the act of coming home. I had not realized how much this book, and the series, shaped aspects of my life, always in subtle ways.

I strongly recommend this book and this series. I've loaned my copies out, always making sure to get them back. This series in one of my top three books of all time.

“No, he’s not all right. But I seem to be the only one who questions it. I think I’m becoming a pain in the ass to him. I hate it.”

“Sometimes,” his father said, filling the glass cups in their Russian - style metal holders, “a friend has to be that.”
Page 27