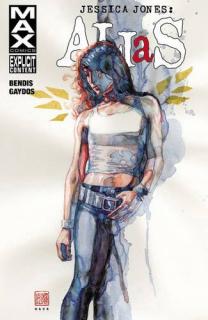 As mentioned not ten minutes ago in the Alias Volume 2 review, I watched another episode of the Netflix Original Jessica Jones series, and followed it up with the comic original version. I followed up volume two with this volume, three. You're shocked, I know.

This one dove a bit farther into the Marvel Universe than I had read, involving a number of lesser-known (as in waaaaaaaaaay lesser known) super heros of the Marvel Universe, which makes the series and the backstory honestly that much more interesting (again, in the "I find this fascinating" sense, and not in the "I find this to be shit, but can't tell you" sense of oh-god-don't-hurt-anyone's-feelings bs going on these days).

This collection included the missing issue 10 of the original Alias series, which was okay, since the rest of the comics had more to do with the remaining plot than issues 11-15 in Volume 2. This particular story arc, again, involved finding a missing girl, though it's also full of misunderstandings and misinterpretations, which do a bit to further the plot.

Again, I'm enjoying the series, as I am beginning to be drawn into the Netflix version. There's a Volume 4, which I don't have, and a second Pulse series that I'm now interesting in reading. Though, I could cheat and just read the wikipedia page.

I'll see what my budget for books is next month before deciding. 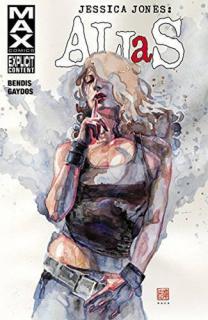 Yep, another night of watching Jessica Jones Netflix Original episodes, followed by the comic original version. This evening was Alias Volume 2 (and Alias Volume 3, be unsurprised).

I found the artwork in this issue interesting in the actual definition of "interesting" and not the politically correct version of "I think this is ass, but don't want to hurt your feeling, so I will use the word 'interesting' in place of 'piece of shit' interesting."

A girl goes missing, and Jones is hired to find her. The girl is artistically talented, intellectually curious, and socially angry at the small-minded, hate-inspiring nature of her home town. There isn't much mystery to the plotline (which encompasses books 11-15 of the Alias series, meaning issue 10 is (looks askance) elsewhere), but the social commentary makes the book worth reading. I would argue doubly so in these hate-fill times where the issues raised in the book are more prevalent 10+ years after publication.

I'm enjoying the series, as I am beginning to be drawn into the Netflix version. I'm looking forward to (oh, crap, I've already finished) the next collection.

More so, in that I've read the wikipedia page and kinda (read as "do") know what's going on. 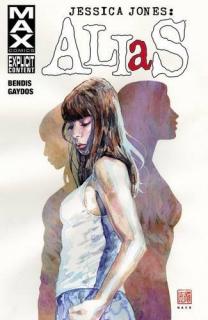 With the current Netflix Original show Jessica Jones currently available in its complete first season, a number of my friends have been watching. The show is dark and sits uncomfortably in the soul. It explores the concept of "the devil made me do it" in a very tangible sense: a mutant in the Marvel Universe with the ability of mind-control.

As a fan of the Marvel Universe, I know most of the major, overarching plot threads of the universe up until the late nineties. So, when my friends started talking about Jessica Jones, I was intrigued, and also started watching the show. When I realized I couldn't separate out Krysten Ritter's performance from her role in "Don't Trust the B---- in Apartment 23," I figured reading the original source, the comics, was probably the best move to understand what's going on.

This graphic novel is a collection of Alias 1-9, starting with a back story of how the series came to be. I'm intrigued that it started just around the time I stopped reading comics, but my timing has never been that great in a lot of things. I likely wouldn't have picked up the comic, but I'm enjoying them now.

A number of minor, and not so minor, Marvel Universe characters appear in the series, causing me to go off to catch up on the series. Yay for wikipedia and its like.

If you're a fan of the show, read the comics. Much better backstory. Different plot. Fun read.