A Canticle For Leibowitz 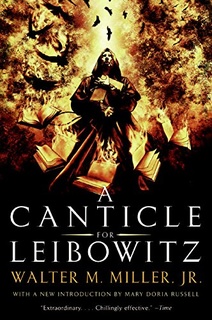 I stayed last night with a high school classmate (okay, okay, fine, ex high school boyfriend) and his family. We have been in touch since he emailed me, seeking contact after he had some dream (some might say, some nightmare) that I was in. We nearly connected for our own mini-reunion a couple times, but other than Jenn, my remaining high school friends remained distant and unknown.

So, when my plans took me to Santa Barbara, with longer distance trip to Orange County to meet up with my mom who was travelling through, I asked Paul if I could visit. I'm not sure if I asked if I could stay with him, or he asked if I wanted to, but the timing worked out really well, and, hey, what do you know, we caught up last night.

After I figured out that Carpenteria is not Camarillo, and 6 is not a 9 in his address.

That, and 3s look a lot like 5s at night, in the wrong font.

Yes, I went to the wrong house not once, but TWICE, trying to find his house. It wasn't until he brought the garbage out to the curb after seeing a suspicious car drive up and down the street six time.

Paul and his wife stayed up with me for hours, talking about this and that and the other. Paul commented about being nervous, maybe a tad bit weirded out. I wasn't. It was nice meeting Gena, catching up on life, laughing at the various mishaps and successes. I missed the kids in the evening, arriving too late in the evening to see them.

The next morning, though, whoo!

As I was waking up, I heard the thunder, uh, sorry, the pitter-patter, of little feet. The door opened at one point, and a little head peeked in, popped out, and declared, "She's sleeping!"

Eventually, I did manage to wake up, and wander out to see the three kids. After I was bombarded by the three little ones, Gena asked Paul, "Does she like kids?" It's a question that many people have asked. Just because I don't want them, doesn't mean, well, as Paul answered, "yes, I think so, as long as she can give them back."

The oldest boy (yeah, yeah, I know his name, but I don't know how much Paul wants me to post about his kids, so, until he tells me, the kid is "the oldest boy") read a Leap Frog book to me, demonstrating how to start pages, how to read the pages, how to interact with them. Apparently that was just enough to win him over.

Paul's little girl and I were goofing around together after breakfast as her older brother was getting ready for school. She'd start with running the length of the kitchen, arms outstretched, and launching into my arms. I'd pick her up, spin her around and put her back down. At that point, she'd run back across the kitchen, turn around, and start over. After about 5 or 6 of these runs and swings, I looked up to see Paul and Gena staring at me, a dumbfounded look on both their faces.

Apparently, Paul's girl doesn't really warm up to people, and certainly not in any physical way. Score two for me.

I had no chance with the third child, another boy, though. Too young to win over. Maybe next visit.

I had a great time, and am very glad Paul and Gena let me stay with them.

Now to find a bag of some good Orville Reddenbacher popcorn that isn't microwave popcorn. Sunday nights are popcorn night at their house, a tradition every house should have.

If we had been born 20 years after we had actually been born, this is what our dates would have looked like: each of us behind our computer, chatting via IM.

An email from a high school boyfriend

I received an email from a high school boyfriend tonight. It was one of those non-committal, probing emails that opens the doors to reunion while still leaving the possibility of non-action, should contact not be desired.

When I saw the email in my inbox, I was quite surprised. Oh, sure, my email address is out there on the 'net. I try to keep my site off most search engines (doesn't always work, judging by the spiders that crawl my site), but the only email addresses that are public are the one on my resume, the one on the about page and the one from the BAYU (Bay Area Youth Ultimate) site, off the SFUL site.

In other words, you can find me if you try, but you have to try a little.